Support on Patreon Follow @wellshwood
56 Comments
By Any Fair Measure

a Santa Barbara racist getting what he deserved ❤️ pic.twitter.com/Vf7ewwNR6H 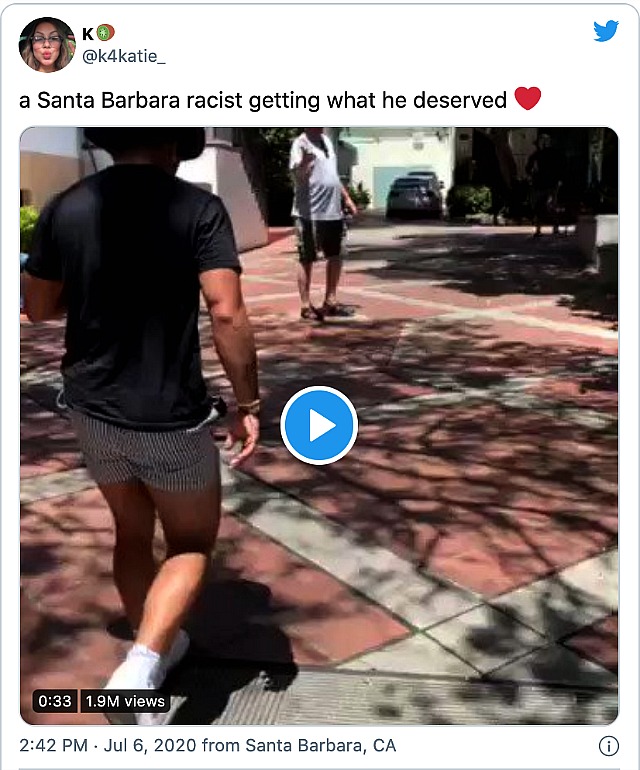 Futile repeating of basics: The late Ennio Morricone was a legendary film-music composer. The common consensus is that he deserves a place in the pantheon, and I’m certainly not arguing with that. But his score for Terrence Malick‘s Days of Heaven (’78) is the only one I truly love, and I just don’t believe that his stuff was otherwise all that elevating or transcendent. Over a half-century-long career he created good, respectable, at times haunting, occasionally hum-worthy music. And that’s as far as I can go.

Alas, yesterday the People’s Central Committee for the Assessment and Approval of Critical Opinion decided that yesterday’s “Subdued Respect” post had to be condemned. What’s that old Carly Simon line? “These are the good old days.” 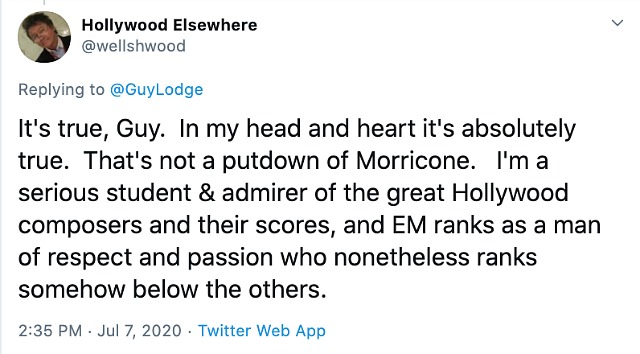 Manic but well-disciplined editing plus a fascinating paranoid-whisper soundtrack delivers the effect of being inside Donald Trump‘s mind on a bad day. It reminds me of the brilliant editing in Oliver Stone‘s JFK. HE commenter Jeff Tompkins: “Agreed. A brilliant exercise in Psyops using his phobias against him. Biden’s strategy of letting Trump kill himself while hiding some of his own weaknesses would also be brilliant, if it was actually planned.”

45 Comments
Harper’s to Khmer Rouge: Back Off

In a July 7 manifesto titled “A Letter on Justice and Open Debate” and signed by over 100 journalists, authors and academics, Harper’s is warning the world about the dangers of woke fanaticism and Robespierre cancel culture.

“Whatever the arguments around each particular [twitter-shaming or cancelling], the result has been to steadily narrow the boundaries of what can be said without the threat of reprisal,” the essay notes. “We are already paying the price in greater risk aversion among writers, artists, and journalists who fear for their livelihoods if they depart from the consensus, or even lack sufficient zeal in agreement.

“This stifling atmosphere will ultimately harm the most vital causes of our time. The restriction of debate, whether by a repressive government or an intolerant society, invariably hurts those who lack power and makes everyone less capable of democratic participation. The way to defeat bad ideas is by exposure, argument, and persuasion, not by trying to silence or wish them away.”

I’m naturally interested in Charlie Kaufman‘s just-published Antkind. What blogaroo wouldn’t be? I’ve only read the opening chapter, but it appears to be a withering satire of a highly self-regarding film devotee slash journalist-author type. The title, which could be interpreted to mean “kind of like an ant”, seems to indicate Kaufman’s attitude about his middle-aged (late 40s?) protagonist.

He sounds like a cross between Humbert Humbert and a Jewish Gerald McBoingBoing. (It’s actually Rosenberg something-or-other.) He’s bald and proudly wears a big, Herman Melville-ish, Brillo-paddy Richard Brody beard as a badge of honor and exceptionalism. He wears “owlish wire-rim glasses” and has a “hawkish nose and sunken blackbird eyes.” And he has a fetching, significantly younger African American girlfriend with whom he has great sex…bullshit. 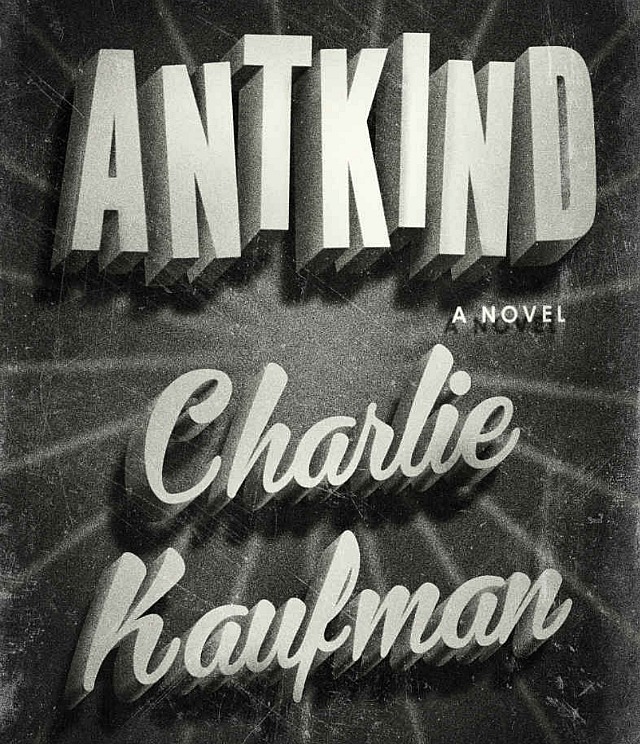 To go by the Amazon excerpt, the tone of the book is a kind of deep-burrowing insect absurdism. Or, you know, a kind of surrealist extremism that keeps the reader at arm’s length. Nothing is real, and nothing to get weirded out about because it’s Charlie Kaufman wandering through a hermit-termite world…a low-rentish, film-dweeb nether realm, half cave and half steel cage.

Descriptive excerpt: “Trapped in a self-imposed prison of aspirational victimhood and degeneratively inclusive language…while attempting to keep pace with an ever-fracturing culture of ‘likes’ and arbitrary denunciations that are simultaneously his bête noire and his raison d’être.”

HE commenter Jimmy Porter said this morning that Kaufman “gets effete film bloggers down to a tee.” The toenail-fungus kind, he means. We’ve only just met, but Rosenberg McBoingBoing has never owned a pair of suede Bruno Magli lace-ups, trust me. And he’s certainly no urban rumblehogger.

In the opening chapter Humbert Rosenberg McBoingBoing is driving through pitch-black darkness in rural Florida, heading toward St. Augustine. Every so often he notices a roadside fast-food joint with the lights on but zero customers. One of these operations is called Slammy’s. Any rural fast-food joint with an eccentric, clearly non-corporate name like Slammy’s is something to be savored if not cherished. If I saw an open-for-business Slammy’s in some out-of-the-way hamlet I would pull over without hesitation. I would order and sit on one of the outdoor benches and phone-surf. I would breathe it all in and smell the air and gaze at the stars.

Charlie’s protagonist pulls in, but only to get some paper towels and a cup of water to clean his windshield with. That’s a significant difference right there.

Correction: Good writing happens to you. You’re sniffing and digging and poking around, and then, if God or fate or luck wills it, you’ll strike oil in the same way that James Dean‘s Jett Rink noticed oil seeping through the mud. If you stay with it (and if you’ve any kind of knack or talent) you’re suddenly in the groove and maybe even riding a perfect wave.

The best way to find oil is to not care if what you’re tapping out is any good. If you’re reviewing yourself as you write, if you’re overly concerned with how people might react as you’re attempting to say or explain something, you’ll never take flight. Otherwise writing…typing, I should say, is drudgery. Typing without hope of oil is worse than digging ditches.

And being stuck on a dry, oil-less plateau with an IBM Selectric while sitting inside a West Fourth Street studio back in the early ’80s…it was so godawful I can’t revisit.