Or is it the chubby shirt? Brenda Vaccaro, James Farentino and Elizabeth Ashley are definitely rail-thin. I’d love to see an all-new Celebrity Bowling match between Brad Pitt and Alia Shawkat on the home team, and LexG and Zach Galifianakis opposing.

It’s not the CG….well, it is but it’s mainly the voiced animals and the paychecks for the actors who play them. Sam Rockwell as Ivan, the well-paid grown gorilla. Brooklynn Prince as Ruby, a baby elephant, and Angelina Jolie as Ruby’s elephant mom…two paychecks. Danny DeVito as Bob, a dog who deposits a nice fat paycheck at the end of the day. Helen Mirren as Snickers, the paycheck-cashing poodle. Chaka Khan as Henrietta, a chicken who won’t cluck unless you pay through the nose, and Ron Funches as Murphy, a paycheck-earning rabbit. And so on.

Boilerplate: “In 1973, a gorilla named Ivan lives in a cage at the Exit 8 Big Top Mall and Video Arcade with an aging elephant named Stella and a dog named Bob with no recollection of how they got there. They are owned by Mack, the owner of the Big Top Mall. When an abused baby elephant named Ruby shows up and is taken under Stella’s trunk, Ivan starts to care for her as well and along with the janitor’s daughter Julia, they help to turn things around at the mall.”

A few days ago I reported that Phillip Noyce‘s Above Suspicion, a brilliant Kentucky redneck true-crime drama that I saw and wrote about three years ago, is “still unreleased”, although a late summer opening in Australia via Madman is planned. U.S. distributor Roadside Attractions wanted to open it last March, but then COVID-19 intervened. The current plan is to open it sometime in the fall (maybe) or, failing that, in early ’21, depending on the pandemic.

But now that’s all up in the air due to pirated copies of the film circulating all over, which obviously compromises the streaming rental value. The bootleg availability is due to a premature, scattershot, ad-hoc distribution that has basically put the cart before the horse.

The usual plan for an American-made film, especially one set in the rural heartland, would be to open in the U.S. with at least a modest p&a budget ($8 million in p&a spending had been sought for Above Suspicion) to support the initial release. International bookings follow from that. But not this time. Not with a distribution strategy that any veteran would call penny-wise and dollar-foolish. 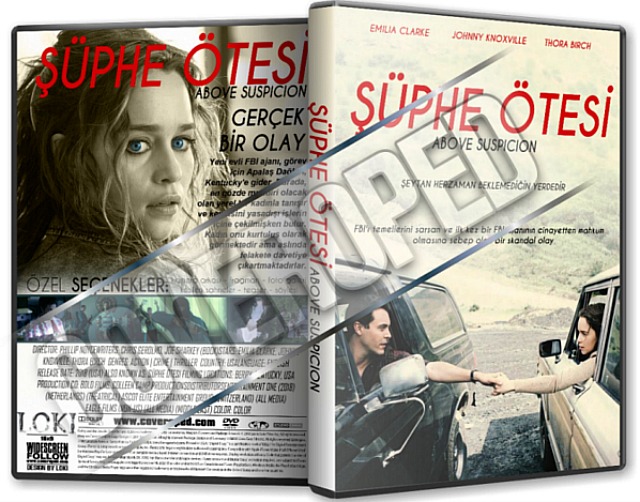 According to this Time Out link, Above Suspicion‘s first commercial booking was in Dubai on 3.18.19. Another theatrical engagement happened in Lebanon on 7.4.19, according to the IMDB. This was followed by an Israel release on 1.23.20. On 8.12.18 original Above Suspicion author Joe Sharkey reported that a Turkish-dubbed version called Suphe Otesi (a rough translation of the English-language title) was streaming online. Several months later, per the IMDB, came a “DVD premiere” in Greece on 3.12.20. This was apparently followed by a 6.19.20 release in Japan (theatrical or digital only?).

Perhaps the most egregious opening of all is the imminent streaming debut of Above Suspicion in England on Monday, 7.13. “Egregious” because star Emilia Clarke (Games of Thrones, Solo: A Star Wars Story), who is rightly proud of her performance as the murdered FBI informant Susan Smith and would have granted interviews to generate interest, was never even told about the British streaming release until a couple of days ago.

Last Wednesday (7.8) The Guardian‘s Peter Bradshaw gave Noyce’s film a three-star review (trust me, it’s at least a four-star effort). Presumably Variety and The Hollywood Reporter will review concurrent with the 7.13 release.

Other territories have been sold, including Germany, Eastern Europe, Italy, Iceland, Scandinavia, Spain, India, South Africa, Switzerland, South Korea, Latin America and South America. The pandemic has turned everything upside down, of course, but opening territories on a random patchwork basis, especially before the domestic U.S. debut, is not the usual way to go.

Roadside had wanted to distribute Above Suspicion since it was finished in mid ’17, but a long holdup resulted over a party that wanted to invest $8 million for p&a. Negotiations dragged on forever. As one observer puts it, “If you’re in real estate, the usual thing is that if you say no, the property goes up in value. That doesn’t work in film, however.”

Word around the campfire is that the “comparatively rich” $8 million p&a offer was made in March 2018. The p&a guy wanted America and all English-speaking territories (England, Canada, Australia, New Zealand) while two senior investors could have all of the foreign, non-English-speaking territories. The offer concluded with the following prophetic line: “This show is like a melting ice cube, and with every day that goes by the value diminishes. Therefore this offer is open until the end of business (PST) on Friday, March 23, 2018.” The offer was rejected.

Over the last three years, in fact, a total of five such offers were rejected.

I’m told that this investor is nonetheless still ready to make a deal. He/she is “not put off by piracy” and “has agreed today to keep the investment and is happy for the film to play in the U.S. as late as February 2021.”

Noyce has been unwilling to speak about this long-running situation since ’17, but here’s what he says now, speaking for himself and Above Suspicion producer Colleen Camp:

“Colleen and I were devastated to discover that our film is about to be released in the UK. The news came on top of discovering by chance that the Australian release was also imminent. I myself feel like a parent who has lost a child in the chaos of war. The thought that the movie I’ve loved is not even being respected with the dignity of us all being informed in advance of its release just sickens me.