An experimental University of Oxford COVID-19 vaccine (called ChAdOx1 nCoV-19 vaccine) will reportedly immunize people from COVID-19 after two doses. The vaccine been given a passing grade in a 7.20 report by The Lancet. The word is that a million doses could be manufactured by next month, and that general distribution may happen by year’s end or certainly by early ’21. 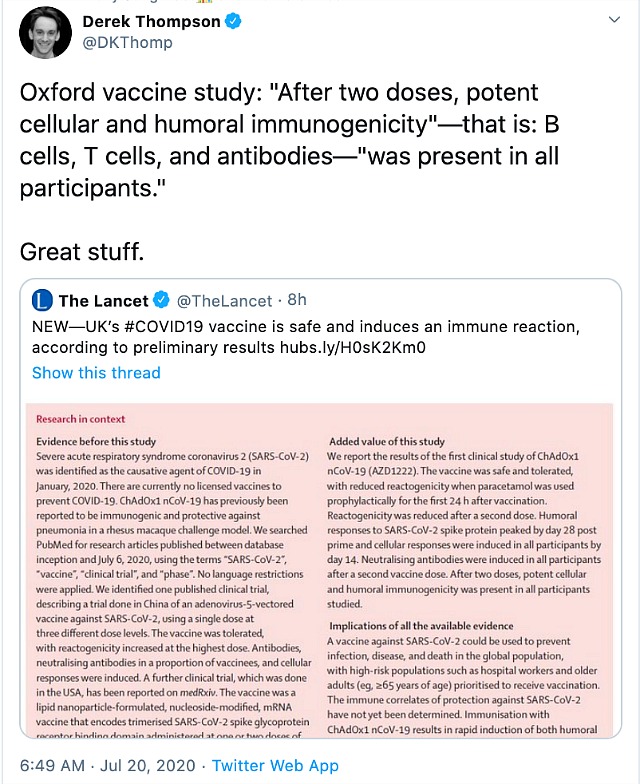 The general consensus is that Rod Lurie‘s The Outpost is still the top-streaming movie after three weeks of exposure. If you go by iTunes and Google Play rankings, that is, as reported by Forbes‘ Scott Mendelson.

On the other hand FandangoNow says that Trolls: World Tour was the #1 flick last weekend, followed by The Outpost. The Numbers also has Lurie’s film behind Trolls.

Mendelson: “The Outpost is technically the top movie on iTunes, while Google Play seems to [also] give the advantage to The Outpost.

“Over at Netflix NFLX +1.9%, it looks like a day-to-day battle between The Old Guard (which is allegedly on track to nab 74 million viewers in its first month) and Fatal Affair. The Charlize Theron comic book superhero movie is allegedly topping worldwide, while the 90s throwback thriller starring Nia Long and Omar Epps has been #1 since premiering on Thursday.” 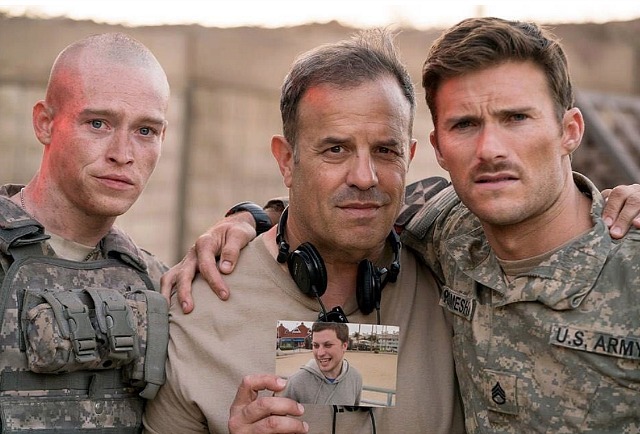 Speaker Pelosi to Mika Breszinski on Morning Joe this morning: Orange Plague “will be leaving” the White House “following the 2020 election, whether he knows it or not. There is a process. It has nothing to do with a certain occupant of the White House [who] doesn’t feel like moving and has to be fumigated out of there.”

Fumigating is what people do to get rid of insects. Just so we’re clear on that.

BREAKING: Speaker Pelosi slams Trump: “Whether he knows it yet, or not, he will be leaving.” @morningmika pic.twitter.com/BqbV6kEUmr

“But it’s gonna happen. Either way, he’s goin’. I told you before, we tried everything to help him, you know that. He brought this on himself. And it’s landing on us.” — Joe Pesci in The Irishman, starting ar 1:37.

Initially posted on 7.17 by Babylon Bee, re-posted here with equally satirical HE edits: Martin Luther King has been posthumously cancelled for stating 57 years ago that people of all races should be treated equally and judged “not by the color of their skin, but by the content of their character.”

The feeling today, particularly among “1619 Project” advocates, is that MLK was unfortunately blinded by Christian humanitarian instincts, and was therefore unaware of (or in denial about) the fundamentally heinous nature of white Americans, not to mention the fact that the U.S of A. is and was a Nation of Evil that was built upon slavery and is currently maintained and administered by relentless racism.

The basic progressive view is that it’s pointless to encourage nobler, gentler behavior by whites due to their incorrigibly racist attitudes, which are baked in the bone.

It is therefore best to posthumously (if regretfully) cancel Dr. King, as the beliefs espoused during his “I Have A Dream” speech (8.28.63) do not reflect the truth of things as BLM progressives now understand them.

Respect must be paid to the Lincoln Project for the speed in which they assembled this spot last weekend. The first reports of the Department of Home Security goon squads in Portland, allegedly activated by Trump-Barr over frustration with what they regarded as half-measures by local law enforcement, surfaced late on Friday, 7.17. The spot was up and running by Sunday, 7.19. HE counter-opinion: I still say it’s tedious and mystifying for street demonstrations to continue day after day in Portland (and more recently in Seattle). Do Portland demonstrators feel that their point hasn’t been made after 54 days of non-stop street action?

Rather than shift the release for a third time (the previous dates were 7.17 and then 8.12) WB distribution is basically saying “this is infuriating and borderline ridiculous…we don’t know when we can open Nolan’s brilliant film but we’re also getting tired of setting new dates only to see them fall by the wayside. This country has become an international joke as far as battling COVD-19 is concerned, but at least we can open it in Europe before too long.”

When will Tenet open domestically? Sometime in mid to late October or more likely November? Sometime before 12.31.20? “We will share a new 2020 release date imminently for Tenet,” WB chairman Toby Emmerich said in a statement.

Things couldn’t be much worse for moviegoers and U.S. exhibitors in particular, already cut off at the knees by the pandemic and recently praying for late summer re-openings. But arrogant under-40 asshats (along with southerners and rural bumblefucks nationwide) said “no” by continuing to party at bars and cafes and spreading COVID-19 willy nilly.

Exhibitors are dying and the country’s economy is suspended in a medically induced coma, and these guys are socializing like there’s no tomorrow…could their behavior be any more loathsome or despicable?

Those who want to see Tenet sooner rather than later might want to fly to Europe, as it seems likely to open there first. “We are not treating Tenet like a traditional global day-and-date release, and our upcoming marketing and distribution plans will reflect that,” Emmerich explained.

“Per HE commenters The Band and JBM, Drago, Save Farris, Hardcore Henry and Arpin Lusene are really making your website toxic. You need to ban half a dozen of the worst asshats to restore some fresh air to the site. Time for them to go. This is important. Hardcore recently said he ‘wasn’t getting any pussy.’ Your female readers are losing their lunch. DO SOMETHING.” — Producer pally.