Rick Worley‘s “The Rise and Fail of Ronan Farrow“, posted on 7.20.20 and introduced by Robert Weide, punctures several holes in the obstinate Farrow narrative that insists Woody Allen is guilty of having molested Dylan Farrow in August 1992.

Worley’s conclusion: Ronan Farrow’s first column about Allen (THR, 5.11.16) was called “My Father, Woody Allen, and the Danger of Questions Unasked”, and he spends much of it chiding the media for refusing to ask Allen the ‘tough questions.’

“The truth, of course is that Allen has been asked these tough questions endlessly for 28 years. Reporters still ask them constantly, and now he’s written a memoir, including a section that provides his answer in forensic detail.

“Ironically, when Allen made this attempt in his memoir to thoroughly respond to these tough questions, it was Farrow who unsuccessfully worked to have the book canceled.

“Ronan Farrow, on the other hand, has been very careful to never put himself in situations where he would be asked questions he didn’t want to answer, and until recently, nobody wanted to ask them. I’m wondering how long it will be until Ronan gets asked some ‘tough questions’ where his usual vague answers won’t cut it.

“Once people see that much of the animosity toward Woody Allen is built on this very same house of cards and shoddy reporting, will they maybe start to ask themselves the tough question of why they were so willing to assume Allen was guilty when all the evidence pointed to the contrary?” 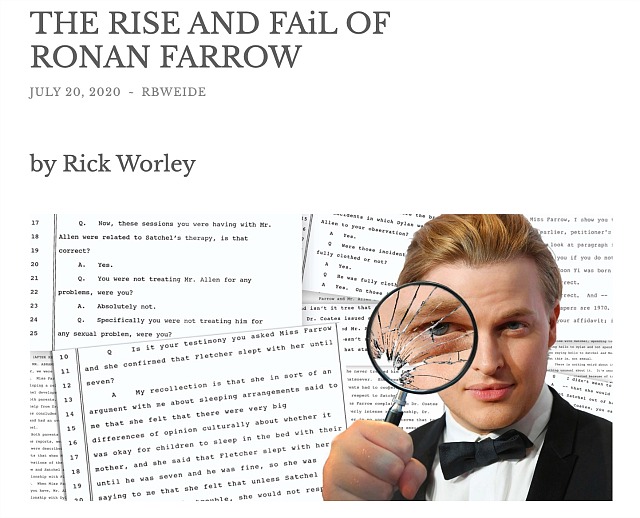