Almost exactly a year ago I suggested that Elvis Presley‘s grandson, Benjamin Keough, could “theoretically” play his late grandfather in Baz Luhrman‘s in-preparation biopic about the relationship between Presley and Colonel Tom Parker (Tom Hanks). “I’ve no idea if Keough can act or sing or anything,” I wrote, but he’s “nearly a dead ringer” for Elvis, and would seem like the right choice “in terms of genetic follow-through.”

A half-hour ago TMZ reported that Keough, the 27 year-old son of Lisa Marie Presley and musician Danny Keough as well as the brother of Riley Keough, “has died of an apparent suicide.”

TMZ: “Law enforcement sources tell us Ben appears to have died Sunday in Calabasas from a self-inflicted gunshot wound. [The deceased’s] grandparents are Elvis and Priscilla Presley.”

TMZ follow-up (3:57 PM Pacific): Lisa’s “is completely heartbroken, inconsolable and beyond devastated,” said her manager Roger Widynowski, “but is trying to stay strong for her 11 year old twins and her oldest daughter Riley. She adored that boy. He was the love of her life.” 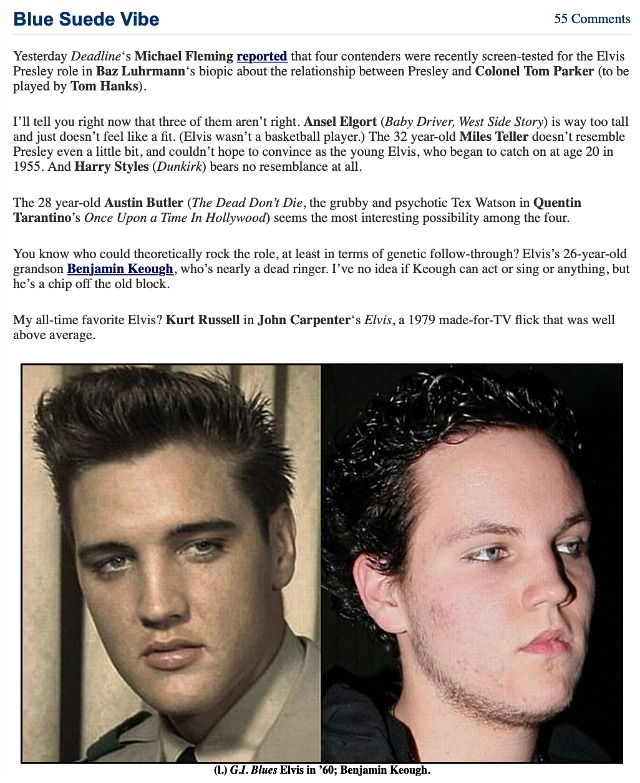 July 12, 2020by Jeffrey Wells5 Comments
« Previous post
Sex and Balances
Next post »
In Libya or Iraq, He Means….