Rather than shift the release for a third time (the previous dates were 7.17 and then 8.12) WB distribution is basically saying “this is infuriating and borderline ridiculous…we don’t know when we can open Nolan’s brilliant film but we’re also getting tired of setting new dates only to see them fall by the wayside. This country has become an international joke as far as battling COVD-19 is concerned, but at least we can open it in Europe before too long.”

When will Tenet open domestically? Sometime in mid to late October or more likely November? Sometime before 12.31.20? “We will share a new 2020 release date imminently for Tenet,” WB chairman Toby Emmerich said in a statement.

Things couldn’t be much worse for moviegoers and U.S. exhibitors in particular, already cut off at the knees by the pandemic and recently praying for late summer re-openings. But arrogant under-40 asshats (along with southerners and rural bumblefucks nationwide) said “no” by continuing to party at bars and cafes and spreading COVID-19 willy nilly.

Exhibitors are dying and the country’s economy is suspended in a medically induced coma, and these guys are socializing like there’s no tomorrow…could their behavior be any more loathsome or despicable?

Those who want to see Tenet sooner rather than later might want to fly to Europe, as it seems likely to open there first. “We are not treating Tenet like a traditional global day-and-date release, and our upcoming marketing and distribution plans will reflect that,” Emmerich explained.

An off-the-record passage of the WB press release, passed along by Dan Solomon: 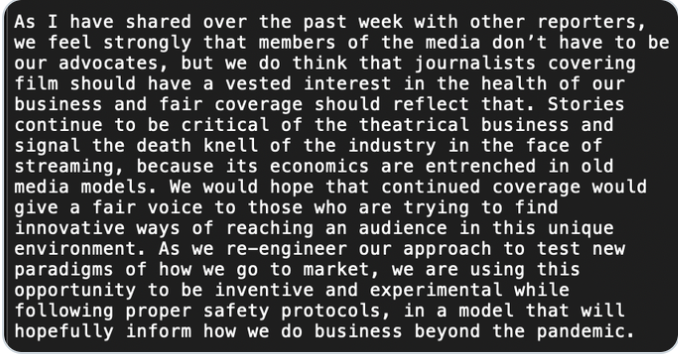