My Dogs Will Eat Your Dogs

It’s unseemly and unfortunate when a big-name actor promises to embarass another big-name actor. Keep that shit stowed, guys. I was nonetheless impressed when Mickey Rourke recently swore to make life difficult for Robert DeNiro with, shall we say, a special linguistic pizazz.

MR: “I swear to God, on my grandmother, on my brother and all my dogs…i gonna [sic] embarrass you severally 100%.”

Only geniuses invent their own terms, and what Rourke meant by “severally”, of course, was that he would embarass DeNiro several times…over and over, embarassment without end. And who needs “I’m” when you can just say “i”? HE is also stirred by “I swear on all my dogs” — that’s a line that Jack Nicholson might’ve said in The Departed.

I’m also taken by “I don’t look up to [De Niro] no more, I look through him…I look right through his asshole.”

On or about 9.15.19, Rourke told an interviewer for a lightweight Italian interview show called “Live – Non è la D’Urso” that he was “broke,” and that he’s angry that DeNiro zotzed him out of a possible supporting role in The Irishman.

MR: “The casting person told my manager that De Niro said he refused to work with me in a movie.” 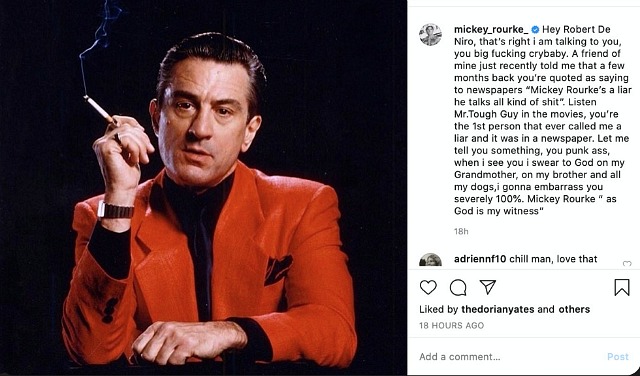