A couple of weeks ago I finally caught up with Kelly Reichardt‘s First Cow. I avoided it at the 2019 Telluride Film Festival and again when it opened theatrically last February, and you know why. I tried to write this review for days and days, but couldn’t. If I was to write a piece about composing this review, I would call it “I Died A Thousand Times.”

We’re all familiar with Reichardt’s minimalist, low-energy mise en scene (Wendy and Lucy, Meek’s Cutoff, Certain Women), and her longtime co-writing partnership with Jonathan Raymond (First Cow is an adaptation of his 2008 book “The Half Life“) and so on. I guess I was intimidated by the prospect of sitting through another under-lighted, fly-on-a-wall, watching-paint-dry flick, especially with an 1820s Oregon backwoods setting. The only thing I was looking forward was the boxy aspect ratio (1.37), which Reichardt always shoots with.

Alia Shawkat** appears in the first scene, which is set in the present-day Oregon woods alongside a large river with a cargo ship cruising by. Shawkat, who doesn’t say a word and disappears within two or three minutes, happens to discover a pair of buried skeletons lying side by side and apparently touching hands. How did this couple happen to expire at the same moment (were they killed? a suicide pact?). And why in the woods? And who were they?

Reichardt never answers the first question, but at least we get to know the couple, “Cookie” (John Magaro) and King Lu (Orion Lee), when First Cow flashes back to the 1820s.

Cookie is an inventive organic chef who’s been making meals for beaver trappers, and King Lu, an Asian immigrant, has killed a Russian guy or something and is hiding from authorities. They become friendly at some trading post, but not in a way that struck me as gay or even especially affectionate. They’re just comfortable with each other, mainly because they’re both unassuming and soft-spoken.

The only “plotty” thing that happens is when Cookie and King Lu, who are not larcenous by nature, decide to surreptitiously milk a skinny brown cow that belongs to a pompous rich guy (Toby Jones). Cookie uses the stolen milk to make tasty muffins of some sort, which they’re able to sell without effort to the local traders and miners (played in part by René Auberjonois, Ewen Bremner, Scott Shepherd, Gary Farmer).

All of a sudden the movie comes faintly (but only faintly) alive because they’re in business, and we actually care what might happen. Imagine!

We know, of course, that Jones will eventually realize where the milk is coming from, and then Cookie and King Lu will be in serious trouble. Do they deserve to be shot for milk theft? That seems to be the consensus among Jones’ pallies once the scheme is discovered, but all that really happens is that (a) Cookie suffers a bad cut on his forehead, which seems to make him weak and wobbly, and (b) an armed Jones ally or employee is seen hunting them in the woods.

This leads to a finale in which woozy Cookie needs to lie down in the woods, after which he appears to pass out and die. King Lu lies down besides him and…what? Wills himself to death for the sake of sympathy or friendship? King Lu: “If you’re going to die in the woods, Cookie…okay, your call. But you’ll need some company as you enter heaven, and maybe if I lie beside you my body will also get tired and give up the ghost? Worth a try. What have I got to live for anyway?”

Do you see what I mean about watching a Kelly Reichardt film? She can’t even indicate whether or not Cookie and King Lu are gently sexual with each other or just palsy-walsy. She can’t devise a conversation between them in which the pair, feeling antsy about the thievery, go to Toby Jones and suggest that he might want to fund them in a start-up bakery business. She can’t show the guy with a rifle actually shooting Cookie or, more to the point, King Lu. Because if King Lu takes a bullet it would therefore make sense when he lies down next to Cookie and dies.

But you know what? Things that happen in a Reichardt film never feel movie-fake. Stuff might be confusing or under-explained, but I’ve never had believability issues with her films. She has a certain low-key way of shooting her material, and she’s obviously more into women than men, and she always takes her time and yaddah yaddah. But as I watched First Cow (I actually watched it in three stages) I felt my soul draining out of me like sand.

** Right away I was thinking “where’s Brad Pitt?” 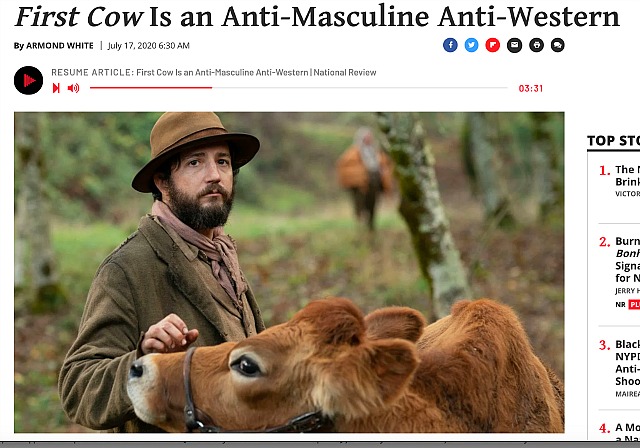 Just for fun, here are excerpts from Armond White’s review, which posted this morning:

“When First Cow opened just before the COVID lockdown, Reichardt drew a line in the sand separating her queer feminist agenda from Hollywood convention. First Cow became the most critically acclaimed film of 2020 and now that it’s back via streaming services, Reichardt’s rejection of genre tradition becomes part of the recently escalated chaos; it’s a renewed threat.

“Reichardt’s anti-Western, set in the Pacific Northwest of the 1820s, counters the historical mythology of strong white male founders through two sensitive (read queer) cisgender males, Cookie Figowitz (John Magaro) and King-Lu (Orion Lee), who partner covertly. Using their skills at cooking and survival, they sell baked goods to the treacherous Gold Rush pioneers, a venture in early entrepreneurship — and minority group audacity — that costs them their lives.

“Reichardt posits that American capitalism is based on treacherous, murderous competition; she reveals her bias by patronizing Cookie and King-Lu as victims. She dooms her enterprising mixed-race couple, thereby blaming the melting pot rather than praising it. The duo steals milk from a neighbor’s cow, Reichardt’s symbol of nature, yet she disregards the in-place system of ownership that renders her thieving couple as plunderers — a slip-up in her nascent Communist narrative.

“Reichardt’s woebegone heroes can only interest the pop generation that has canceled John Wayne and fully bought into the idea of American heterosexual wickedness.

“First Cow plays out Reichardt’s misandry in highbrow terms: quoting William Blake (“The bird a nest, the spider a web, man a friend”) and then by art-movie stealth. Cookie and King-Lu are metrosexual prototypes: Cookie is maternal; he cooks, cares for a child, and cleans the abode while King-Lu is handy, chopping firewood and directing their business project. Reichardt’s indie-queer aesthetic is tendentious; she teaches modish ways of viewing gender roles, social roles, and history.

“Reichardt’s male-male narrative should be romantic — and inspiring like the pre-feminist entrepreneurial melodrama Lucy Gallant. But Reichardt’s dark, desiccated point of view is strictly negative. All the rich vision and emotion that made McCabe & Mrs. Miller magnificent — including Altman’s genius use of Leonard Cohen ballads and his evocation of William Faulkner — are missing. We sit and watch Reichardt play out her bitter thesis without being astonished.