Bari Weiss, the left-centrist, anti-left-extremist staff writer for the New York Times’ opinion section, has resigned over the general atmosphere of wokester bullying by the radical Marxist BLM absolutists (i.e., the 1619 crowd). Please read her resignation letter, but the gist is that she’s found the climate of leftist doctrinaire intolerance at the Times to be intolerable.

Over and over Weiss had been accused of wrongthink by the African American vanguard and their ardent white-guilt allies of being too centrist and measured and occasionally contrarian in a revolutionary era dedicated to overhauling conventional liberalism and quashing half-measure doctrines once and for all. 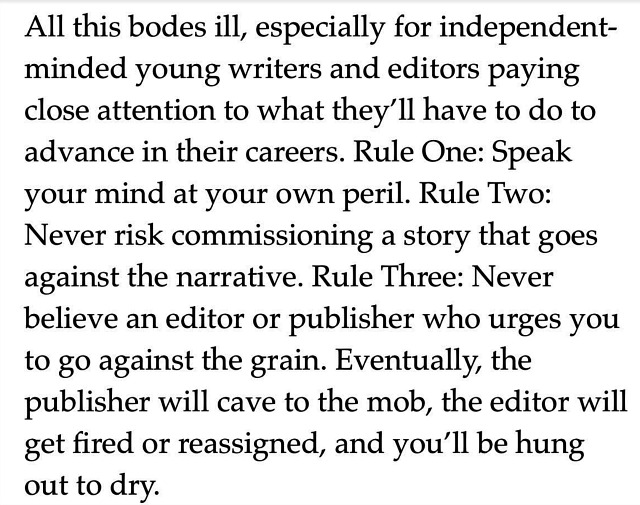 In an era in which “offense-taking has been weaponized and a route to political power,” as Weiss noted a couple of years ago, her ultra-left enemies at the Times beat her over and over with their condemnation sticks (“We don’t feel safe with people like you around”), and Weiss finally couldn’t take it any more. The “safeties” made her feel unsafe.

Just as ardent #MeToo wokesters have accepted the idea that a few relatively innocent men might have to be destroyed in order to overthrow the patriarchy, revolution-minded BLM wokesters feel that severe measures (including intolerance directed at people like Weiss) are justified during a unique historical moment in which institutional and everyday racism is being shouted down and beaten into some kind of submission.

“Twitter is not on the masthead of The New York Times, but Twitter has become its ultimate editor,” Weiss said in a resignation letter addressed to publisher A.G. Sulzberger earlier today. “Stories are chosen and told in a way to satisfy the narrowest of audiences, rather than to allow a curious public to read about the world and then draw their own conclusions. I was always taught that journalists were charged with writing the first rough draft of history. Now, history itself is one more ephemeral thing molded to fit the needs of a predetermined narrative.”

Ahhh, the narcissism of small differences! What kind of a rancid, punitive atmosphere has manifested inside the paper of record? Weiss’s resignation offers a clear snapshot. 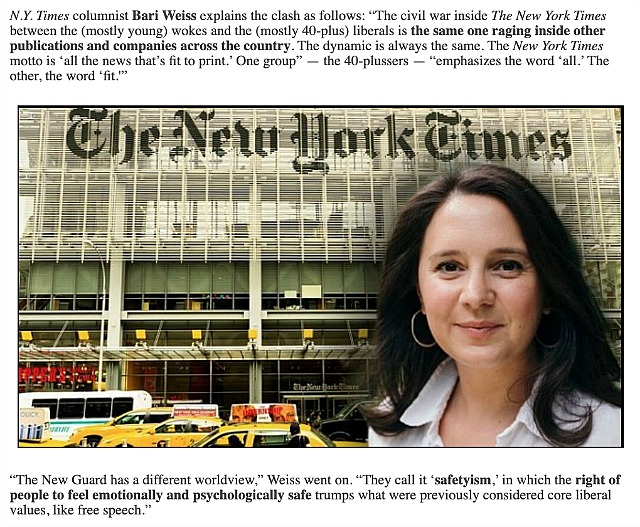