Which Will Be “Allowed” To Win Best Picture?

We all understand that Best Picture Oscar winners have always been chosen for primarily political reasons. Quality-focused judgments have always been secondary. So it will be when it comes to singling out 2020/21 Best Picture contenders. The big distinctive hurdle, as we’ve seen during three of the last four years, is that the winner will probably have to pass a “woke” test.

Over the last five years (’15 through ’19) only Spotlight (’15) and Green Book were pure quality-level or emotional bull’s-eye wins. Yes, wokester fanatics — Green Book was beloved for the emotional current of the last 20 or so minutes. And if you don’t like hearing that, tough.

Moonlight (2016, awarded in early ’17) is a good film, but it won Best Picture so the Academy members could proclaim they weren’t in the grip of #OscarsSoWhite. Don’t argue — just ask Spike Lee.

Guillermo del Toro‘s The Shape of Water…I don’t know know why it wasn’t beaten by the obviously superior Dunkirk or Call Me By Your Name in early ’18 as the script was clearly a curious, genre-level, sexy-beast wokey thing (a direct descendant of Creature From The Black Lagoon). Whatever the reason, Shape didn’t win because of any pure-quality consensus. Perhaps it prevailed by sheer force of personality (i.e., Sally Hawkins + GDT)?

Parasite obviously won because a sufficient number of voters agreed with the blunt-social-assessment aspect (life is unfair for the poor) plus the wokesters loved the idea of choosing a well-made film by a filmmaker of color, and one that didn’t fit the usual definition of a Best Picture winner. Plus Bong Joon-ho worked the town like a locomotive. The first half of Parasite is very good (it goes off the rails when they let the fired maid in during the rainstorm) but it won because of identity (i.e., non-white) politics. Don’t lie, don’t argue — that’s why.

So which of the ’20 and ’21 Best Picture contenders will be “allowed” to win the Best Picture Oscar? The winner might have to be a film that reflects the complex contrarian currents of our time and/or some kind of black-white cultural schism thing. Or it might win because it’s simply good. As far as I can project that means the finalists will be…ah, hell, you tell me. I haven’t seen squat, and I can’t foresee what conditions will be seven months hence.

I don’t know what I’m talking about. It’s mid July and nobody has a clue. The Oscar season of 2020 and early ’21 is looking strange as we speak. A strange chapter for everyone everywhere. A feeling of apartness, alienation, despair. Nothing to depend on. 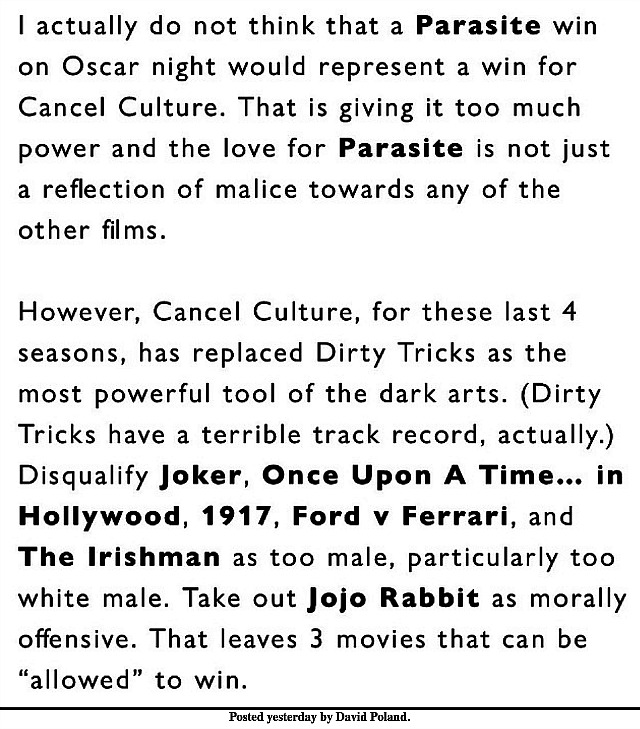