Why would I want to watch Outpost in Malaya (aka The Planter’s Wife)? Because I mentioned it 12 and 1/2 years ago, sight unseen, after finding a color photo of the old Leows’ State marquee while this 1952 Ken Annakin film was playing there. In the back of my mind I’ve always wanted to at least sample parts of it.

Posted on 12.6.07: “I accept that I’ll probably never see Outpost in Malaya, a Jack Hawkins-Claudette Colbert adventure flick with rubber plants, Communist insurgents, elephants, a cobra and a mongoose. It’s not on DVD, was never issued on VHS and hasn’t even aired on TCM or TNT. But if I hadn’t wandered across this shot of 1952 Times Square, I never would have even heard of this Ken Annakin film. And to think that people lined up to see it, bought popcorn and everything.” 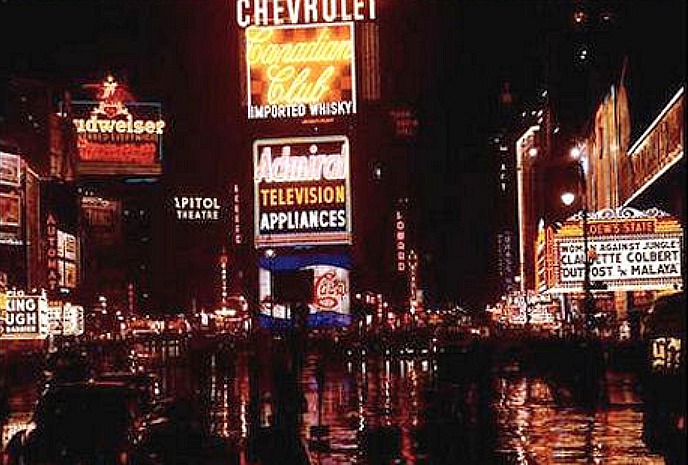 That was then, this is now. A year or two ago a 480p version began streaming on Amazon, and about two weeks ago it appeared for free on YouTube. I watched the very beginning this morning and was shocked to discover it’s in black and white.

All this time I’d presumed it had been shot in glorious color. The exotic backdrop obviously required it. A year earlier John Huston‘s The African Queen had been location-filmed in Technicolor, and in ’52 John Ford‘s Mogambo (which opened on 10.9.53) was captured in Kenya the same way. Alas, the Outpost in Malaya producers (Pinnacle Productions) couldn’t manage the cost. Here’s Bosley Crowther’s 11.27.52 review.

By the way: Malaysia was subject to the British Empire from the 18th Century onward. Peninsular Malaysia was unified as the Malayan Union in 1946. Malaya was restructured as the Federation of Malaya in 1948 and achieved independence on 8.31.57. Malaya united with North Borneo, Sarawak, and Singapore on 16 September 1963 to become Malaysia. In 1965, Singapore was expelled from the federation.”