Six months ago Rose McGowan did a podcast chat with “Catch and Kill” author Ronan Farrow, and in so doing mentioned a sexual misconduct episode (technically statutory rape) that happened, she said, between her 15-year-old self and an unnamed director who was then in his late 20s.

Last night on Twitter she identified the alleged misconduct guy — director-writer Alexander Payne. If (and I say “if”) this happened, the term “statutory rape” definitely applied. She says Payne showed her a softcore Showtime film he’d directed before they allegedly had sex.

McGowan isn’t calling for Payne’s death and dismemberment, but an acknowledgment and apology. Payne and his reps have been contacted about this. They can agree and apologize, totally deny everything, dispute this or that assertion, etc. But they should quickly respond.

The quizzical part is McGowan’s claim that after their alleged intimate encounter in Payne’s Silver Lake apartment, he dropped her off at Cafe Tropical on Sunset Blvd. The implication (and please dispute if I’m wrong) is that Payne decided not to take the ride-less McGowan where she wanted to go but dropped her off at a cafe near his home because he couldn’t be bothered. That would be ungentlemanly.

McGowan was 15 between September ‘88 and September ‘89. The omnibus sex films that Payne contributed to were produced by the Playboy Channel, and were titled Inside Out (’91 — Paynee’s short is titled My Secret Moments) and Inside Out III (’92). The IMDB page for the latter names ten directors, including Payne and Bernard Rose. Payne apparently landed the gigs when he was 27 or 28 and enrolled at UCLA Film School.

The 29-year-old Payne graduated from UCLA Film School with a Masters degree in May/June 1990.

Here’s a 7.8.90 L.A. Times profile by Patricia Biderman, titled “A Reel Hit: After a screening of his student movie, The Passion of Martin, Alexander Payne was the talk of the town — now the UCLA graduate is learning to direct deals with agents“. The 50-minute thesis film , which took Payne a year and a half to make, had been shown to agents and industry types roughly three weeks before the Times article appeared..

Let’s say Payne finished Martin in April or May of ‘90, and began making it, let’s further assume, in the fall of ‘88.

Did McGowan see Inside Out or did she see The Passion of Martin, which has a sex scene or two? If it’s the latter, she couldn’t have seen much in the fall of ‘88 as Payne was only just beginning to work on it. Let’s presume that he showed her a rough cut of some kind, perhaps during the spring or summer of ‘89. Maybe.

I’d never seen The Passion of Martin before this morning. I haven’t actually watched all of it — only the first 15 minutes. But it’s sharply written and certainly well crafted, especially for a meagerly-budgeted student film. The only problem is the lead actor, Charlie Hayward, who strikes me as a bit creepy. 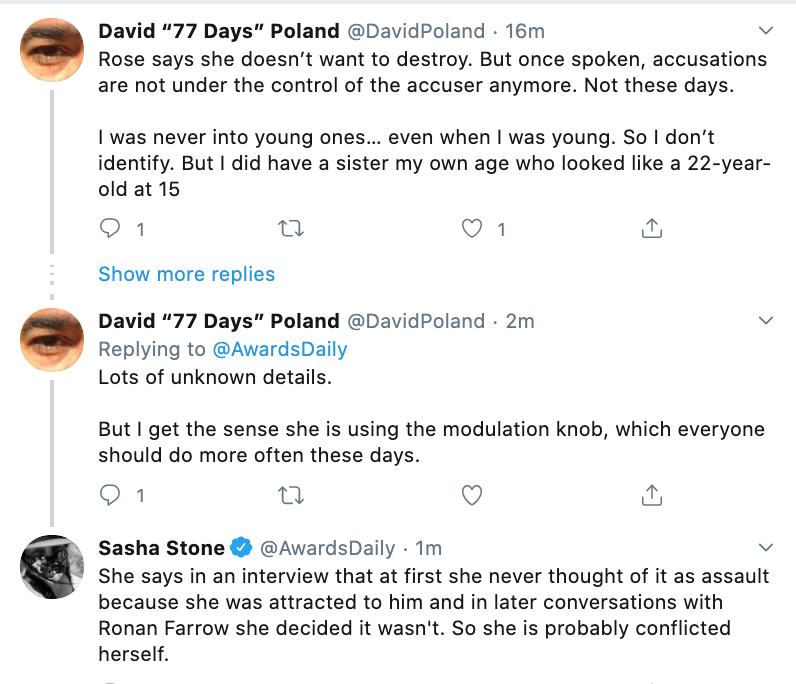