Without giving it a second thought I bought this Eyes Wide Shut mask 20 years ago in Venice. It wasn’t just the Kubrick connection (his team allegedly purchased a truckload of masks from Ca’ Macana) but the pencil drawings on the mask’s left side. I wore it for ten minutes on my flight back home and also during a relatively recent West Hollywood Halloween parade, but mostly it’s just been a wall ornament.

No parade tonight, of course, but many people along Santa Monica Blvd. are costumed all the same.

Postscript: Last night an attorney friend and I tried to enjoy outdoor Japanese dining on Santa Monica Blvd. WeHo was appropriately besieged with Halloween revelers and the usual (if diminished) array of exotic cosplay. The problem was the constant noise and alarm provided by municipal services — flashing cop cars in a big hurry, howling ambulance sirens and (my personal favorite) a large thundering helicopter circling overhead. In short, Bring Out The Dead meets Apocalypse Now. Where did I get the idea that it might be otherwise? 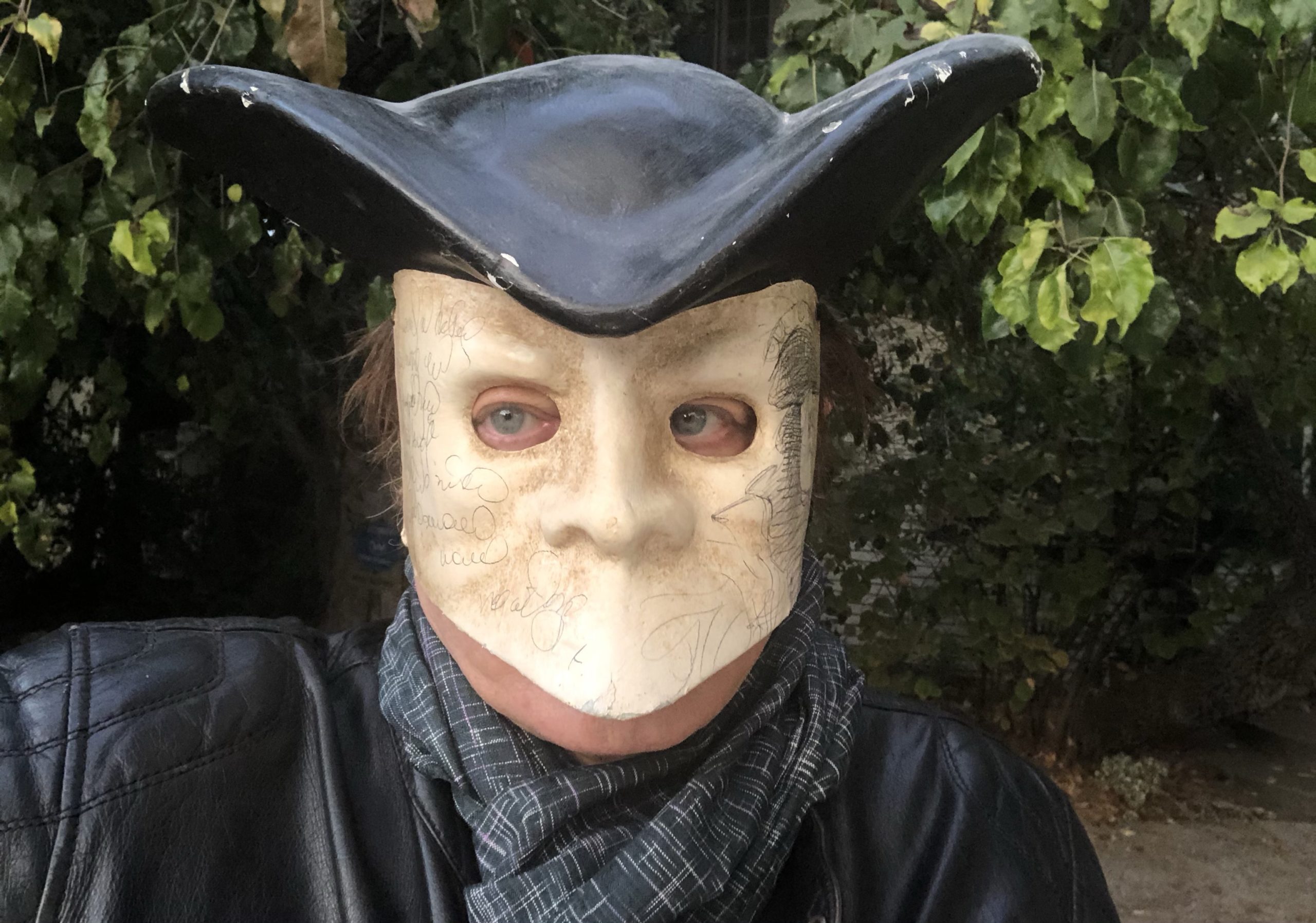 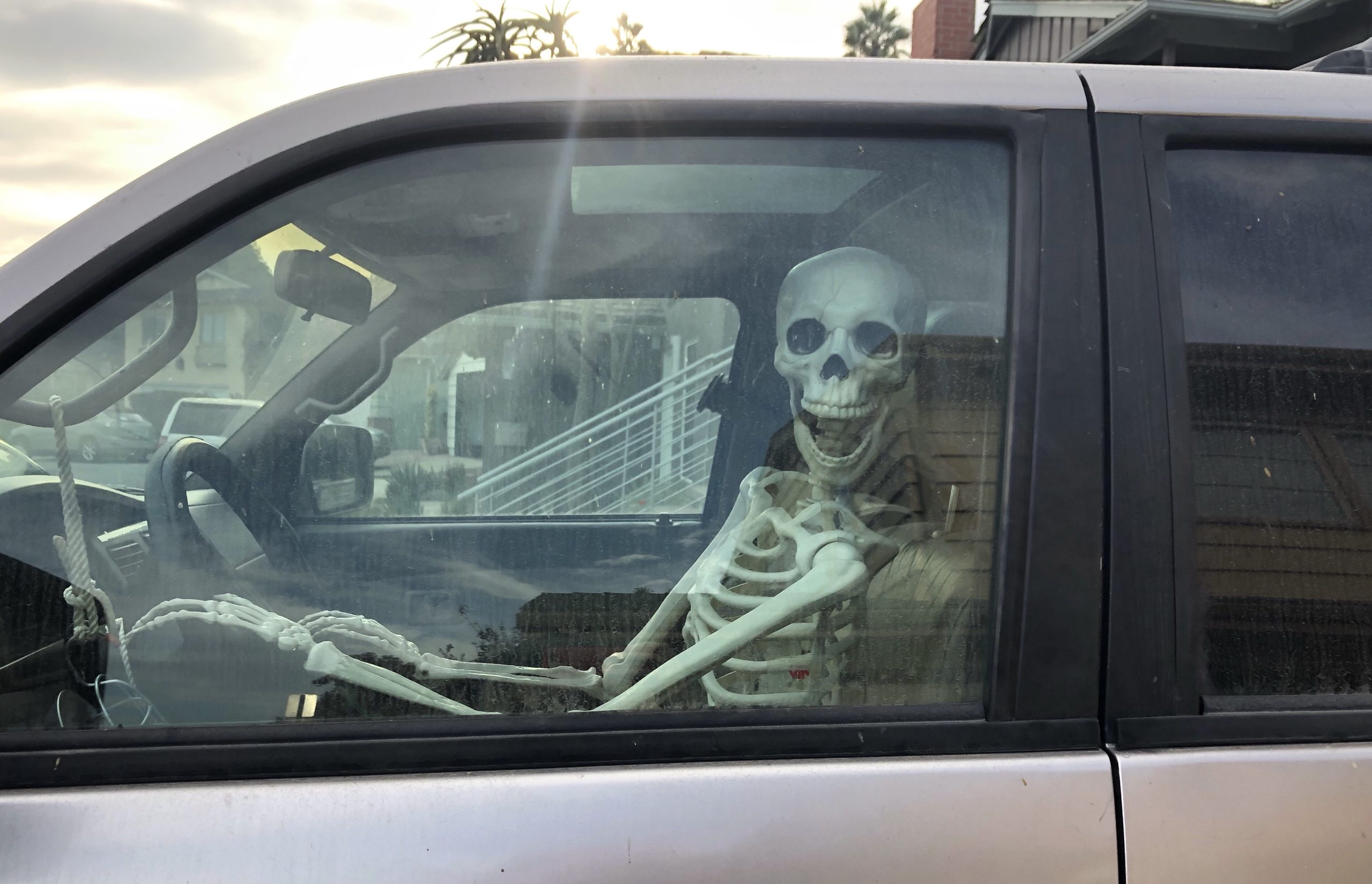 Here's the clip from Trump's Reading, PA rally: “If we win on Tuesday or — thank you very much, Supreme Court — shortly thereafter…”pic.twitter.com/erqh5uNMsk

You can tell from this trailer that Robert Machoian‘s The Killing of Two Lovers (Neon, 2.23) is something else. From Black Cape’s Sundance review, posted on 2.2.20:

“You can tell a lot from the opening scene of a film. First, there’s no music. Two people are asleep in bed. The camera pulls back to reveal a gun and then the man holding it. The loaded, cocked, and is pointed weapon is seconds away from changing the realities of everyone in this room. But wait, there’s the sound of an animal stampede, which parents in the audience will identify as young children rising for the day. Suddenly, our stone-cold killer is a mess of snot and tears. Soon he’s just a jogger on his way home in a small rural town that is just starting to awaken for the day.

“This is the beginning of The Killing of Two Lovers, starring Clayne Crawford as David, the almost murderer. The information trickles in from there. David and his wife Nikki (Sepideh Moafi) are separated, and Nikki is living in the family home with their four kids. They have agreed to see other people, but David is having a very tough time adjusting to this new normal. He wants it to be over quickly, but it’s obvious that Nikki wants something more. She finds it in a new man played by Chris Coy — the two [who] almost met their maker at the start of the film.

“This story is one that is playing out all over America, in working-class families. Some are forced into odd relationships because of financial barriers to divorce or separation. Others face a housing and/or logistical problems. Whatever the case, the couples need distance to heal but can afford to have that distance. This leads to misplaced emotions and especially sticky situations when one starts dating again. That’s the part of The Killing of Two Lovers’ audiences will relate to.

Four years after posting a 3.8.16 Kickstarter reach-out video, Alex Winter‘s Zappa (Magnolia, 11.27) is finally about to open. The lure is a trove of unseen material. Frank Zappa was The Man, and I don’t feel a need to explain that sentence. Winter’s doc chronicles “Zappa’s unconventional music career, as well as his many brushes with politics as an anti-censorship advocate and his interest in running for president of the United States as an independent in the late ’80s,” etc.

Yesterday in Texas a caravan of Trump-supporting dickheads surrounded and attempted to slow down Joe Biden‘s campaign bus, according to The Daily Beast‘s Kelly Weill. The incident happened on highway 35 between San Antonio and Austin. (I was on that road last March so don’t tell me.) There was enough of a hassle that Biden’s campaign canceled an event in Austin, Texas.

Isn’t attempting to blockade the bus of a Presidential candidate against the law? Doesn’t it qualify as terrorism on some level? I presume some Biden staffers wrote down some license plate numbers.

Excerpt: “When the Biden campaign bus drove to Austin [from San Antonio], it was greeted by a blockade of pro-Trump demonstrators, leading to what one Texas House representative described as an escalation ‘well beyond safe limits.'”

“Historian Dr. Eric Cervini was driving to help with the Biden campaign stop when he filmed a line of pickup trucks along the highway, many of them flying Trump flags. The drivers were ‘waiting to ambush the Biden/Harris campaign bus as it traveled from San Antonio to Austin,’ Cervini tweeted.

“’These Trump supporters, many of whom were armed, surrounded the bus on the interstate and attempted to drive it off the road,’ he alleged. ‘They outnumbered police 50-1, and they ended up hitting a staffer’s car.'”

This is a traffic violation and attempted homicide. Why hasn’t anyone been arrested? pic.twitter.com/QnfF4vXMQn

Sean Connery, the coolest, studliest and most commandingly masculine 007 of all time (especially in the first two Bonds, the mostly tech-free Dr. No and From Russia With Love) and a bald man among men when he cast aside the toupee and carved out a formidable (if spotty) post-Bond career with firmly grounded performances in The Hill, The Man Who Would Be King, The Wind and the Lion, The Untouchables, The Name of the Rose, Indiana Jones and the Last Crusade and The Rock…beautiful Sean Connery has risen from terra firma and is now hovering with angels.

A part of me feels a bit glum and forlorn, but then again the Scottish-born Connery had an amazing 90 years on the planet — 25 or 26 years of struggling to become a reputable actor, a bit less than 35 years at the top of the heap (Dr. No to The Rock) and the last 15 in luxurious retirement on New Providence Island in the Bahamas, in the flush Lyford Cay neighborhood.

Connery’s best Bonds (in descending order): Dr. No, From Russia With Love, Goldfinger, Thunderball, Never Say Never Again. (I’m sorry but I rewatched You Only Live Twice a while back and it hasn’t aged well.)

Finest post-Bond films: The Hill, The Red Tent, The Molly Maguires, Zardoz (a respectable failure), The Wind and the Lion, The Man Who Would Be King, Robin and Marian, A Bridge Too Far, The First Great Train Robbery, Five Days One Summer, The Name of the Rose, Indiana Jones and the Last Crusade, The Hunt for Red October, The Russia House, First Knight, The Rock.

Mixed-bag Connery-Hitchcock outlier: Marnie, an interesting film if not exactly a good one.

Temperamentally Sean was rarely…well, not always a day at the beach. Nor did he need to be. He came from a working-class, rough-and-tumble background, and could flash a serious temper when riled. I’ve also heard he had quite the libido. Around the time of Wrong Is Right I heard a story about an impulsive sexual matinee with a journalist in a hotel room. I know nothing, just loose talk.

The wham-slam-bam train compartment fight he had with Robert Shaw in From Russia With Love is one of the greatest hand-to-hand bouts in cinema history.

Connery will always be remembered for dressing down Nic Cage in The Rock with the following line: “Your best? Losers always whine about their best. Winners go home and fuck the prom queen.”

Director-screenwriter Jonathan Hensleigh (Armageddon, Die Hard With A Vengeance, the forthcoming Ice Road) confides that the “prom queen” thing was “one of the earliest lines contributed by Ian La Frenais and Dick Clement, when they came in at Sean’s request to polish his dialogue.”

At that juncture Hensleigh “was working literally day and night to smooth out all the plot wrinkles required when Sean insisted that his character, SAS Captain John Patrick Mason, be re-imagined as a British national, thus requiring the almost overnight invention of the ‘aging James Bond’ character buried away in Alcatraz by the CIA and MI6.

“It’s a sad day,” Hensleigh remarks. “I loved Sean. He was difficult and demanding and made my life hell for six months, but [The Rock] was his comeback role and believe me, he knew it. I loved working with him.”

When the late William Goldman said “nobody knows anything,” what he meant was that (a) no one is an absolute Jedi master at this business, (b) there’s very little you can really take to the bank, (c) nobody knows anything for an absolute dead certainty, (d) there’s always an element of doubt and (e) hunches, intuitions and gut calls aren’t what they used to be.