Watching As We Speak

From Adrian Horton’s Guardian review of HBO’s The Perfect Weapon:

“The hacking of Sony emails by a North Korean-backed team in China — a bizarre response to the studio’s planned release of a movie co-written by Rogen, The Interview, which depicted the fictional assassination of Kim Jong-un — marked a shift in the public understanding of corporate vulnerability to cyber-attack. But the concerns over security and kowtowing to the hackers’ will (the studio ultimately pulled the movie from most theaters) was frequently overshadowed by the gossipy contents of the hack itself, a media pattern repeated and refracted to more insidious effect in 2016, with the Russian hack and WikiLeaks release of Democratic National Committee emails.

“The Perfect Weapon argues, as numerous cyber and media experts have pointed out, that zeroing in on the content of the emails, and in particular on the narrative of a Democratic party ‘rigged’ against Senator Bernie Sanders, played into the Kremlin’s intention to roil the election with destabilizing noise. Even the specter of Russian meddling created an environment where ‘nothing is real and everything is possible’, says John Podesta in the film. ‘That really destroys the credibility of democracy, and that’s what Putin wants.”

“’America is uniquely susceptible to these kinds of attacks because of our openness, because we have a public square,’ said Maggio. ‘Disinformation, the hack-and-dump kind of attacks, are very effective at sowing a lot of chaos.’ Cyber weapons do not need to strike to be effective, due to what Sanger called the ‘perception hack’ — the recognition of foreign meddling as a possibility in any unclear scenario, a caustic understanding which erodes trust in American democratic processes and opens the door for muddled disputes of illegitimacy.'” 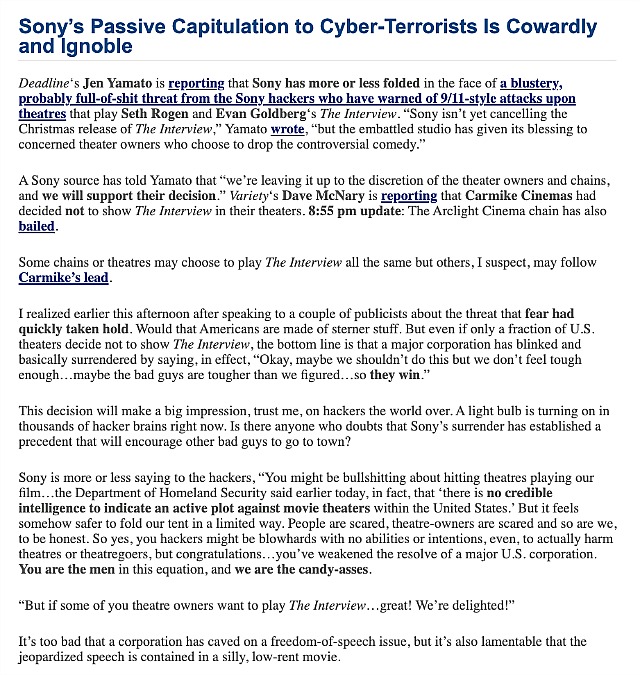 “The blustery, vitriolic language in some of these messages is classic Hollywood hardball stuff. The personal insults are hilarious. I can only marvel at the reaction of Angelina Jolie and for that matter Brad Pitt when they read she’s been regarded by a certain party as ‘a camp event and a celebrity and that’s all…a minimally talented spoiled brat,’ and what Annapurna’s Megan Ellison will think when she reads that she’s been described as a ‘bipolar 28 year old lunatic’ whose liking of this or that Hollywood player may or may not depend on whether ‘she took her meds.’” — from “Leaked Sony E-Mails Over Departed Jobs Project Are Part Mamet, Part Albee,” posted on 12.9.14.