A few days ago I read about Eric Clapton, 75, recording an anti-lockdown song (“Stand and Deliver”) and supporting Van Morrison‘s anti-lockdown campaign to bring back live concerts. Damn the facts, damn reasonable preventive measures, damn the torpedos. So God Clapton is a political bedfellow to, say, Alain Delon? I somehow never glimpsed that possibility until three or four days ago.

Clapton is currently residing in the woke shithouse, I gather. My loathing of wokester fanatics temporarily aside, I agree with whatever Twitter shamings and other punitive measures that have been taken against Clapton. Influential people need to understand that venting thoughtless, selfish opinions about irresponsible pandemic behavior is a no-go.

Excerpt from an 11.27 Wrap piece by Jeremy Fuster:

“Jeffrey St. Clair, editor for news and commentary site CounterPunch, said that news of the song ‘confirms everything I’ve ever thought about Clapton, a musician who has spent his entire career appropriating black music and now records his first protest’= song against meager restrictions to slow a disease that is ravaging black communities.”

“’What the fuck is wrong with these rich assholes?’ asked The Mountain Goats, the band behind the pandemic anthem “This Year.” ‘I ask this as a Van Morrison fan.’

Tweeted by novelist Hari Kunzru: “Last time Clapton weighed in on politics they had to start Rock Against Racism. Clapton is the worst. He has always been the worst. He was even the worst member of Cream. Van Morrison is also the worst.”

What does it mean to be “the worst member of Cream”? Surely not the worst musician or the least famous. Does it means Clapton did the most drugs? Or was the least progressive or something?

Among Entertainment Weekly contributors in the ’90s, the general rule was that a trend story needs three examples. Find three and you’re good. Hence a trio of 2020 and ’21 award-season contenders — Paul Greengrass‘s News of the World (Universal 12.25), George Clooney‘s The Midnight Sky (Netflix, 12.23) and Eduardo Ponti‘s The Life Ahead (Netflix, now streaming) — sharing a basic character-plot strategy.

A crusty, grizzled protagonist of advanced years and pracarious positioning (Clooney’s Augustine Lofthouse, Tom Hanks‘ Captain Jefferson Kyle Kidd, Sophia Loren‘s Madame Rosa) is suddenly responsible for the well-being of an anxious, distant, shell-shocked youth who needs someone to provide comfort and direction and a bit of love. 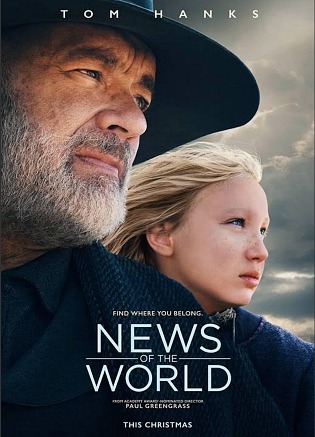 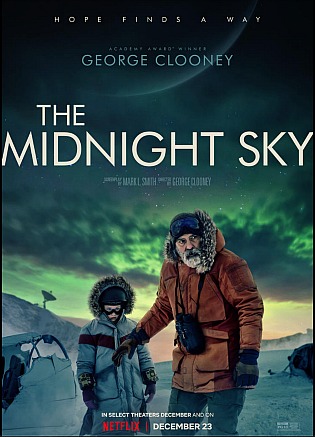 From “How Francis Ford Coppola Got Pulled Back In to Make The Godfather, Coda“, a 12.2.20 N.Y. Times piece by Dave Itzkoff:

“Where The Godfather, Part III (’90) ended famously — some might say notoriously — with the elderly Michael slumping in his chair and falling dead to the ground, Coda shows him old and alive as the scene fades to black and a series of title cards appear. They read, ‘When the Sicilians wish you ‘Cent’anni’, it means ‘for long life’…and a Sicilian never forgets.’”

“In fact, for his sins, he has a death worse than death,” Coppola tells Itzkoff. “He may have lived many, many years past this terrible conclusion. But he never forgot what he paid for it.”

From Richard Rushfield’s latest chapter of The Ankler: “What makes Chappelle’s slow-burn rumination so unusual is that you’ve got here a performer at the peak of his powers, publicly outing the business practices of a pillar of the corporate community, and there is nothing they can do to him. Not a thing.

“This dust-up will only enhance [Chappelle’s] status with his audience and, given his prominence, any streamer would still kill to be in business with him.

“But again, this shows why Netflix continues to run circles around Hollywood as a matter of pure adroitness. Just as Chappelle refers to, having someone who wasn’t there 20 years ago, let alone 100 years ago, who isn’t deeply, culturally at the DNA level resistant to fighting tooth and nail any change to The Way We Do Business, allows them to pick up the phone and say, Yeah, we don’t like that. Take it down.

“There was a time when if an actor on one studio’s payroll made a fuss about his contract of yore at another studio, his current employer would’ve taken him aside and had a little conversation about how things work around here and why are you jeopardizing the launch of your new season carrying on about your personal, etc etc. Netflix does not play that game. And now it’s going to be a lot harder for anyone else to either.”

“This may be the most important speech I’ve ever made,” the Whiny Little Bitch begins. And then, a day after his very own attorney general stooge announced that election fraud wasn’t enough of a factor to alter the election outcome, Trump goes into the crazy (i.e., “tremendous and horrible fraud” in battleground states, Dominion rigged the election) for 42 or 43 minutes before summing up with…nothing.

I thought he was going to say “they’re going to have to drag me out of the White House because the winner never surrenders what is rightfully his. ” Or “I’m hereby announcing a counter-inauguration event to celebrate America and deplore widespread voter fraud” or something in that vein.

In yesterday’s “Evolving Prom Thread” I mentioned that Some Like It Hot is one of my favorite musicals.

Obviously it’s not a traditional song-and-dancer, but if you accept that performative musicals are legitimate permutations and that A Hard Day’s Night and Cabaret are two prime examples, you have to allow that Some Like It Hot also qualifies.

We all understand that classic integrated musicals are about characters breaking into song to express deep-down emotions. But musicals can also be defined as films in which the emotional states of major characters pop through as musical numbers. The key is that separate songs have to be heard three times.

It doesn’t matter if the musical numbers are integrated or performative (a la Some Like It Hot, A Hard Day’s Night and Cabaret). The point is that the songs are (a) telling the audience how this or that main character is feeling, or (b) conveying some aspect of the social milieu, or (c) both.

There are four songs performed in Some Like It Hot — “Runnin’ Wild”, “By The Sea”, “I Wanna Be Loved By You” and “I’m Through With Love.” They convey the successive moods of Marilyn Monroe‘s Sugar “Kane” Kowalczyk (and to a lesser extent those of Tony Curtis and Jack Lemmon‘s Joe and Jerry) as the story moves from Chicago to Miami and as Sugar falls for (and then temporarily loses) “Junior”, the phony Shell Oil heir played by Curtis’s Joe.

Earlier today HE’s “filmklassik” wrote that it’s “absurd” to describe Billy Wilder‘s 1959 classic as a musical. “The emotional state of major characters pops through big-time during the ‘La Marseillaise’ scene in Casablanca,” he wrote. “[By that token] do you consider Casablanca a musical?”

HE reply: No, because (a) the playing of “La Marseillaise” is Casablanca‘s only big number, and a performative musical needs a minimum of three (3) songs. Plus (b) ‘La Marseillaise’ expresses a communal emotion or mood rather than an individual one, or one shared by lovers or close friends.

Just For Variety‘s Mark Malkin is reporting that Chris Nolan‘s Tenet, which has never played Los Angeles theatres due to the pandemic, will play at a central Hollywood drive-in from 12.5 through 12.16. The venue is the Hollywood Theater Legion Drive-In at Post 43 (2035 N Highland Ave, Los Angeles, CA 90068, just south of the Hollywood Bowl). The booking is a warm-up for the 12.15 release of the Tenet Bluray.

There are three problems. One, watching a big-event, large-format film like Tenet from inside your car is a waste of time as only a modest fraction of the total intended impact would be absorbed.** (I saw Tenet three months ago at a Flagstaff Harkins plex, and it was heaven.) Two, the per-car admission is $65 (including drinks, candy and popcorn for the whole family or posse). And three, seeing the film without subtitles guarantees you’ll miss most of the story particulars, due to Nolan’s notorious sound-mix aesthetic.

I’ll be waiting until the subtitled 4K Bluray comes along, thanks. I’m actually excited to watch it this way. 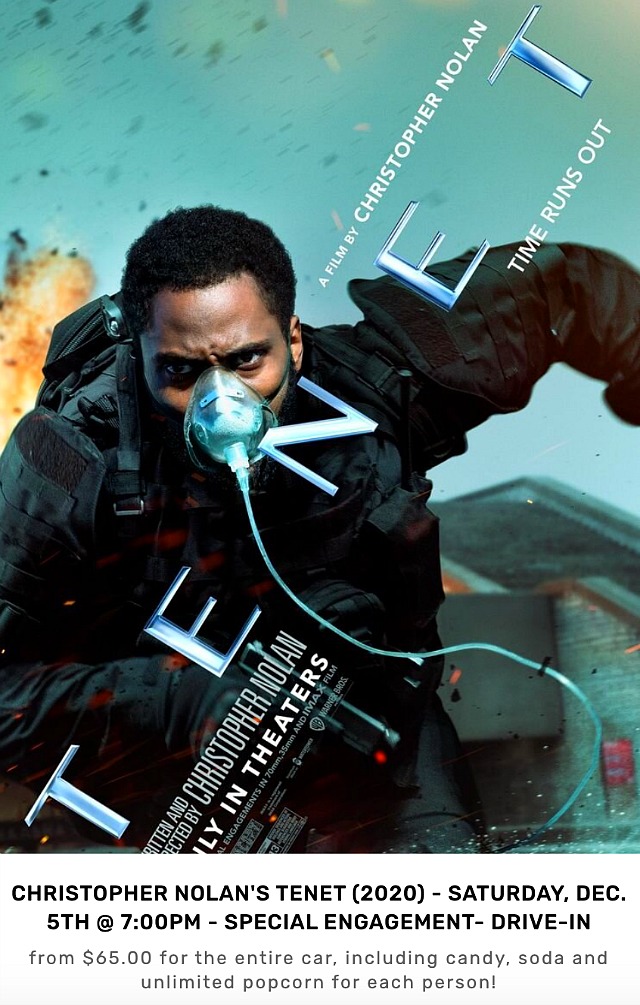