In the last paragraph of his review of Ryan Murphy‘s The Prom, New Yorker critic Anthony Lane alludes to hinterland loathing of strident p.c. badgering, which we know was a factor that favored President Trump, particularly in the run-up to the 11.3 election.

My reaction to The Prom was mixed-positive. I was just as uncomfortable as Lane was about the

as militant wokester instruction. And yet I melted toward the end because it plucked my parental heartstrings. Anyway… 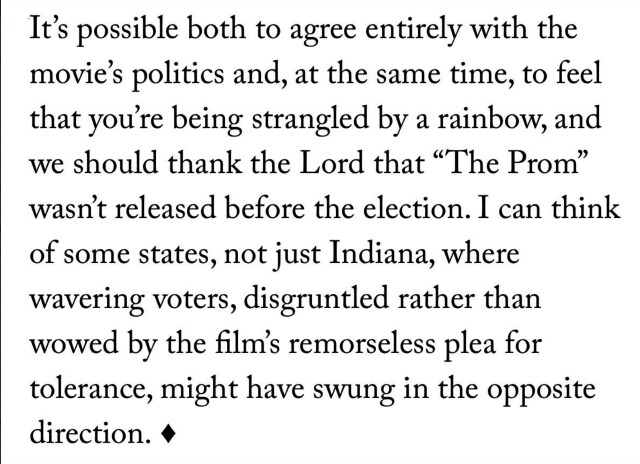 Three nights ago (Friday, 12.18), Orange Plague “discussed naming Sidney Powell, who as a lawyer for his campaign team unleashed conspiracy theories about a Venezuelan plot to rig voting machines in the United States, to be a special counsel overseeing an investigation of voter fraud, according to two people briefed on the discussion.” — from 12.19 N.Y. Times story by Maggie Haberman and Zolan Kanno-Youngs.

From Forbes‘ Nicholas Reimann: “On Thursday, [the pardoned] Michael Flynn said that Trump could deploy the military to swing states he lost to President-elect Joe Biden in order to “rerun” the presidential election.”

Early this morning Variety‘s awards-handicapper Clayton Davis posted some thoughts about what pretty much everyone wants Amazon to do — i.e., enter Steve McQueen‘s Mangrove as a Best Picture contender and submit the other four as an Emmy award hopefuls. Because at 128 minutes, it happens to be 2020’s best feature-length drama.

Nobody will argue with a straight face that any of the other Small Axe films — Red White and Blue, Lovers Rock, Alex Wheatle and Education — have the horses to compete in the Best Picture race. But Mangrove (which I re-watched a night or two ago with Tatiana) clearly and obviously does. Everyone understands that McQueen is a masterful director working at the top of his game. Given the across-the-board praise for Mangrove, what Oscar strategist would insist that its proper place is with the Emmys?

Davis was responding, of course, to the LAFCA foodies yesterday giving the the entire Small Axe package their award for Best Picture.

As Davis notes, “Since LAFCA was established in 1975, no piece of art like McQueen’s has ever been awarded the top prize.” And no made-for-British-TV miniseries has ever been Oscar-nominated en masse. But this is a weird year, and there’s no clear dividing line between theatrical and streaming. There may be unmovable rulebook obstacles, but what a shame all around if so.

Davis has raised three questions — let’s cut to the chase.

1. Can Amazon make the pivot from Emmys to the Oscars?

Yes, if Amazon decides to. Davis: “Under the current guidelines, it looks as though Amazon would have to submit each of the five [Small Axe] films individually. A feature film only has to be at minimum 40 minutes, but that would mean McQueen would be competing against himself for five separate films. It’s hard enough to get AMPAS voters to choose between two films or performances released in the year by the same artist, and Amazon would have to build a consensus around one.” HE: Yes, they need to build a consensus around Mangrove.

2.. What was Small Axe intended for, and doesn’t that matter most?

No, it doesn’t matter. Small Axe was originally intended for British TV, yes, but things change. The pandemic has completely changed the rulebook. Mangrove began as one thing, and is now something else as a result of critical acclaim. It’s simply a matter of Amazon saying, “Okay, maybe the Mangrove fans have a point. Maybe we need to re-think and adapt rather than hold our ground, Alamo-style”

Davis: In January 2017, Variety reported that directors Joel Coen and Ethan Coen worked on their first-ever TV series with Annapurna Television. In August 2017, it was announced that Scruggs would debut on Netflix, and still, it was labeled as a ‘TV series.’ It wasn’t until July 2018, ahead of its world premiere at the Venice Film Festival, that it was announced as a film and headed for the awards season. The film had six separate stories, with no narrative thread, with the film being named after the first segment. So is this just a marketing issue?”

3. Can you submit Small Axe as a single movie?

Nearly two years have passed since Peter Jackson announced his intention to make The Beatles: Get Back, a doc that draws from 55 hours of unused Let It Be footage that was originally shot by director Michael Lindsay-Hogg. And yet, according to Jackson, he and his editors are only about half done. Covid interrupted everything, of course, but Jackson and his team couldn’t work remotely from home?

The forthcoming Disney release (due to stream on 8.27.21) will focus on the Twickenham Get Back sessions of very early ’69. Jackson has tried to convince prospective viewers that the Twickenham sessions were happy and jolly. Maybe they were in some respects. The clips in Jackson’s new teaser suggest that the Beatles, Billy Preston and George Martin were in good spirits (loose, playful), or at least when the cameras were on.

Jackson in January ’19: “The 55 hours of never-before-seen footage and 140 hours of audio made available to us ensure this movie will be the ultimate ‘fly on the wall’ experience that Beatles fans have long dreamt about. It’s like a time machine transports us back to 1969, and we get to sit in the studio watching these four friends make great music together.”

Due respect but this sounds like hype and salesmanship. In no way, shape or form has the Let It Be album ever been “great.” The proof is always in the pudding, and anyone will tell you that the Beatles were obviously in a semi-shitty, dysfunctional place during the Let It Be sessions. Because — hello? — Let It Be is a mostly shitty (if randomly interesting) throwaway effort.

“Working on this project has been a joyous discovery,” Jackson has insisted. “I’ve been privileged to be a fly on the wall while the greatest band of all time works, plays and creates masterpieces. I’m thrilled that Disney has stepped up as our distributor. There’s no one better to have our movie seen by the greatest number of people.”

Any half-honest person will tell you that the Let It Be album is a sluggish, retro-lazy, downish, uninspired thing. Let It Be Naked has value, but the remixed Phil Spector version is arguably the worst album the Beatles ever issued.

The Beatles got their mojo back, of course, when they recorded Abbey Road between March and August ’69. What I wouldn’t give for 55 hours of footage that covers that final period…one in which they seemingly created and performed as a band with a more or less unified spirit…or at least a simulated one with George Martin at the helm.

Or even better, how about a doc that covers their creative peak years in ’65, ’66 and ’67 — Rubber Soul, Revolver and Sgt. Pepper. Or one that covers that whole era of revolutionary change throughout the industry?

The terrible plague of 2020 began last February and thereby launched the single worst year of our lives — a pandemic that will likely continue in a very real and suffocating sense for another four or six or (God help us) eight months or even (good God, please no) into the fall of ’21.

I just want it fully understood that there’s nothing the least bit funny about 2020. There can never be anything funny about 2020…ever ever ever. Not sardonically, bitterly, obliquely or ironically…2020 and the word “funny” will always be separated by vast oceans and deserts and mountain chains.

I thought I had it bad when I was a kid — little did I know. My despair and depression years began when I was six or thereabouts, or when I began attending Devil’s Island grade school. Junior and senior high were even worse.

Save for the fantasy release of TV and especially movies as well as books I actually wanted to read (Robert Benchley, Charles Dickens, Ernest Hemingway, Joseph Conrad) as opposed to ones I was forced to read in school, my life was a miserable gulag existence until I hit my early 20s, and even then it mildly sucked until I finally got going as a writer in my mid to late 20s.

And then came the age of woke persecution and Khmer Rouge re-education, and the lugging of heavy sacks of salt and coal and trudging barefoot through the snow with nothing to keep me warm but the hot breath of the Cossacks.

Life will never be a walk in the park and will always be subject to the usual swings of luck and fate, but before last February I’d never begun to even imagine such profound feelings of stillborn lethargy and empty purgatory, such a paralyzing state of oddly levitating nothingness, as I came to know when the pandemic settled in big-time last March. My soul didn’t “die” exactly, but it stopped vibrating. Life, as I had known it for so many decades, stopped.

Nearly all of us feel the same way, I presume. What an awful draining thing to live through. Okay, not as bad as the Black Death that afflicted Europe for seven or eight years (1346 to 1353) but still…