What Time Is Now Forgetting

Critic friendo to HE: “Regarding your 10 Best of All Time list, nothing before the end of WWII? No Lubitsch, Keaton, Welles, McCarey, Hawks? I guess I can understand this, but I’m still surprised.”

HE to critic Friend: One, when you’re restricted to naming 10 films (I actually threw in a second roster, #11 to #20), you have to he hard. Two, the specific criteria I mentioned — films that seem to echo some aspect of today’s culture, or which reflect something about human nature that seems especially pronounced now — leaves out many great or noteworthy films of the ’20s and ’30s. And three, I guess I didn’t want to sound old fogey-ish.

2021 is about to manifest, and you can’t look back too much. Many if not most Millennials regard the ’80s as the somewhat rickety old days, and Zoomers see the ’90s in a similar light. And they both see the ’60s and ’70s (when GenXers like Barack Obama were growing up) as remnants of a dusty, mostly irrelevant past. To them…hell, to some people in their 40s the 1920s and ’30s are like something out of the Paleozoic era.

If someone asked for a Ten Best of the ’20s, ’30s and early ’40s, off the top of my head I would list F.W. Murnau‘s Sunrise, William Wellman‘s The Ox-Bow Incident, Hawks’ Only Angels Have Wings, Buster Keaton‘s The General, Fritz Lang‘s Metropolis, John Huston‘s The Maltese Falcon plus King Kong, The Wizard Of Oz, Bringing Up Baby, Sullivan’s Travels, Casablanca, The Lady Eve, Gunga Din, The Grapes of Wrath, Orson Welles’ Citizen Kane, John Ford‘s The Informer, Abel Gance‘s Napoleon, Abbott & Costello‘s Hold That Ghost, Leo McCarey‘s Duck Soup, Renoir‘s The Rules of the Game, Battleship Potemkin, All Quiet on the Western Front, James Whale‘s Frankenstein and The Bride of Frankenstein, McCarey’s The Awful Truth, Lubitsch‘s Trouble in Paradise plus My Man Godfrey, Que Viva Mexico, Twentieth Century, The Philadelphia Story, Sherlock, Jr., Tod Browning‘s Freaks, I Am A Fugitive From a Chain Gang, Shadow of a Doubt, The Public Enemy, Michael Curtiz‘s Robin Hood, Hawks‘ Scarface and Curtiz’s Yankee Doodle Dandy, Selznick/Fleming’s Gone With The Wind and Hitchcock’s Rebecca and Lifeboat. What’s that, a little more than 40? 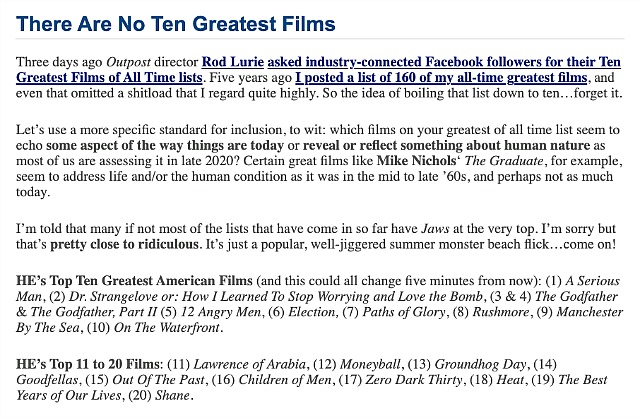