I’ve seen Randall Kleiser‘s Grease exactly once. Ironic ’50s nostalgia had been a thing for roughly a decade when it opened on 6.16.78, and Grease did nothing to advance or upgrade the basic package. It was made strictly for the chumps, and this resulted in a haul of $366 million and change. Definitely not my cup, but now that this John Travolta-Olivia Newton John musical is a topic du jour, I’m thinking about re-watching it. British woke twitter is apparently condemning it for being “racist, rapey, homophobic and slut-shaming.” 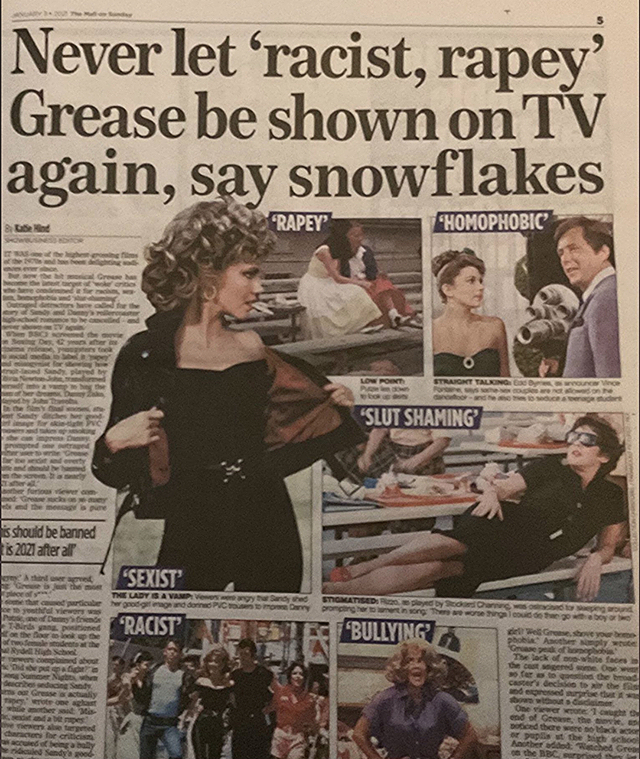 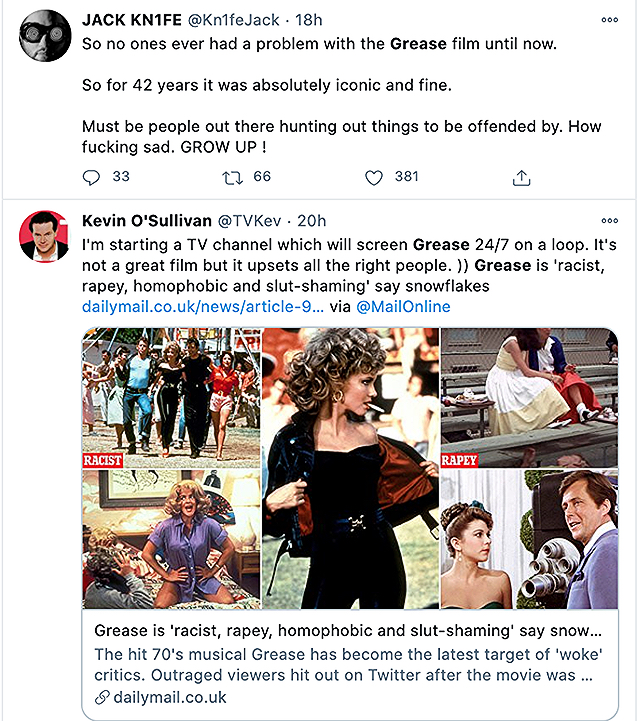 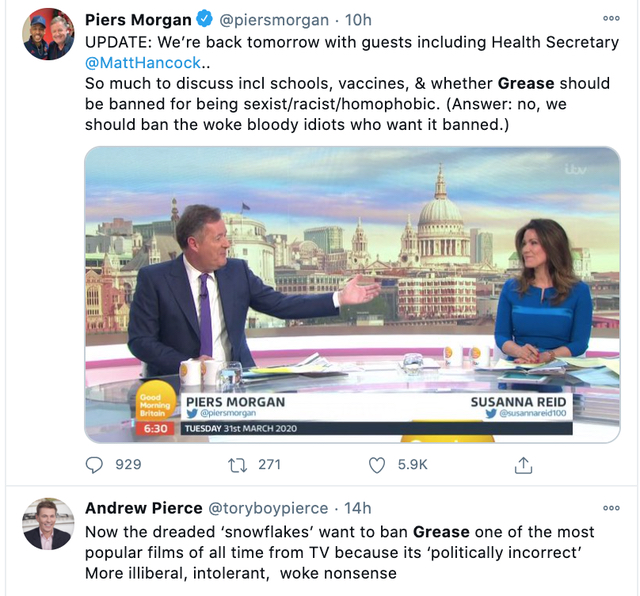 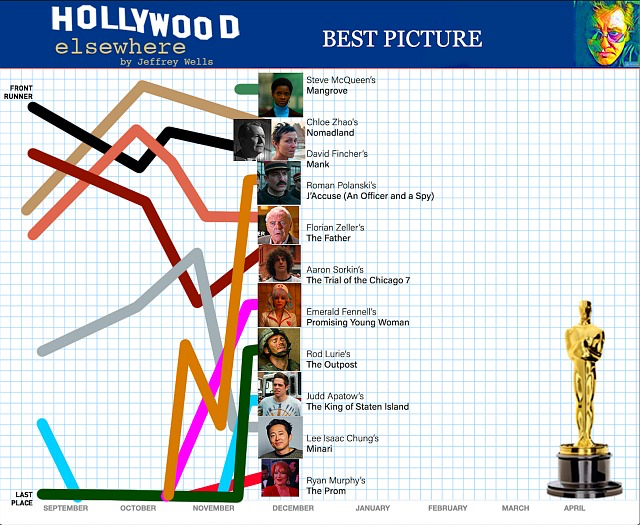 “Bitch” is a term of derision or dismissal. It has a few different applications, but mainly it’s a blunt, angry, aggressive noun — used mainly in heated kitchen arguments or muttered under one’s breath — directed at a woman whom the accuser regards as cruel, heartless, harshly dismissive, ruthlessly resentful or viciously manipulative.

Jane Greer in Out of the Past, Meryl Streep in The Devil Wears Prada, Rachel McAdams in Mean Girls…that line of country.

The male term for such behavior is, of course, bastard.

The implication in this History of Swear Words clip is that perhaps only woman-haters use “bitch” and that in a perfect world it would be as verboten as the “n” word. Okay, but does that go for “bastard” also? Because that would be fairly ridiculous.

The truth is that on a daily basis certain guys unfortunately earn this epithet and then some, just as certain women have arguably behaved in a way that more or less justifies their being called a bitch or “beeyotch.”

Marriages and relationships are not always a bed of roses. Arguments happen, tempers ignite and combatants sometimes deliver harsh judgments.

I was called a bastard once, back in the mid ’80s. A woman friend told me that a friend of hers, whom I knew slightly, liked me and that I should think about giving her a call. “But she’s not my type,” I said, looking to be polite. “You don’t know her…give it a chance,” my friend said. “What I mean is that I don’t find her particularly attractive,” I said. “You bastard,” she replied.

Orange Plague to Georgia Secretary of State Brad Raffensperger in a call yesterday (Saturday, 11.2), and posted today by the Washington Post:

“So look. All I want to do is this…I just want to find 11,780 votes, which is one more than we have. Because we won the state….Brad, what are we gonna do? We won the election…this is a faulty election result…because of what you’ve done to the President a lot of people aren’t gping out to vote, and a lot of Republicans are going to vote negative because they hate what you did to the President…you have a big election coming up on Tuesday.” 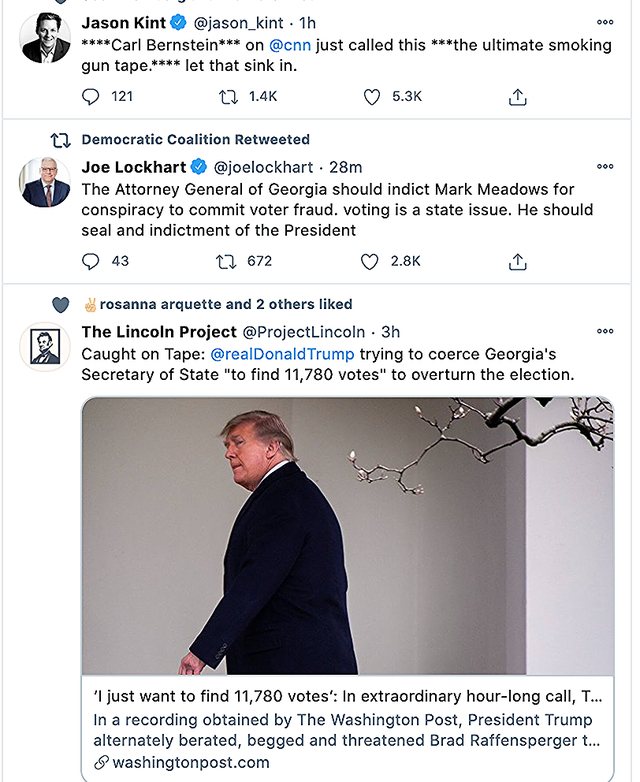 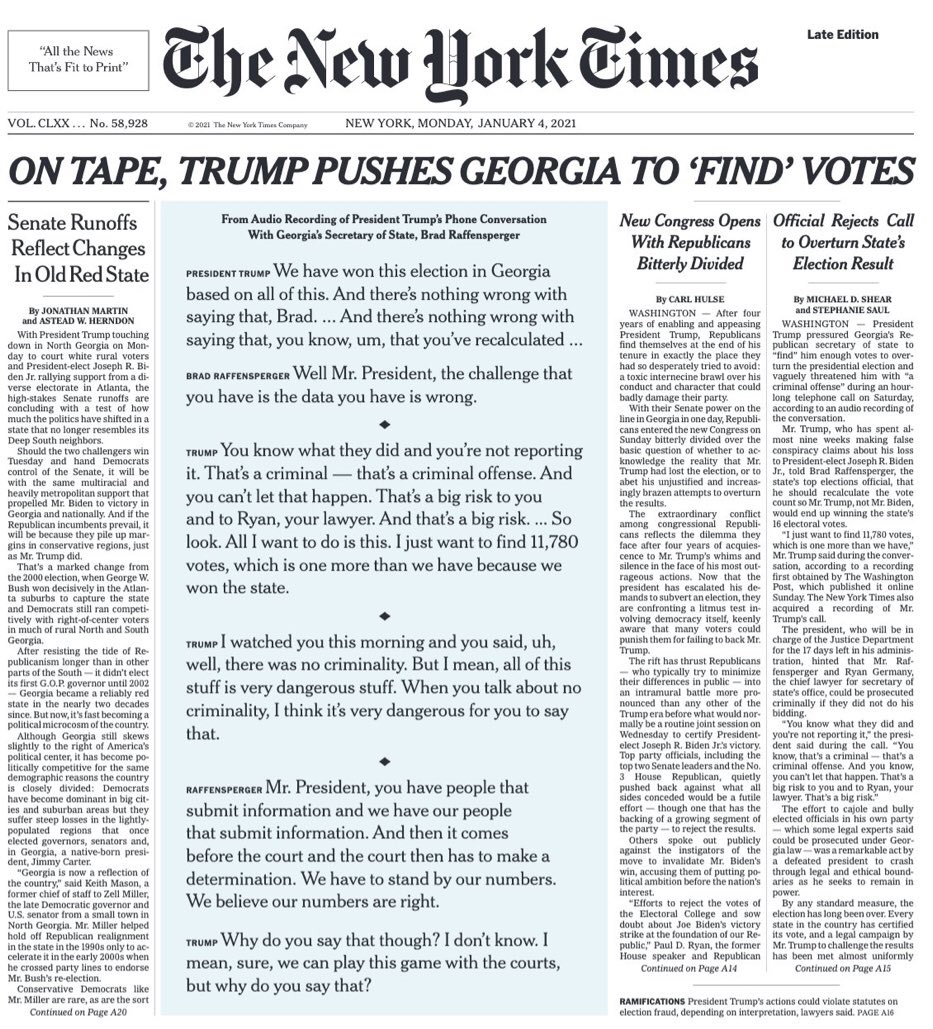 Condolences offered to the fans, friends and family of the irrepressible Gerry Marsden, the smiling, spirited leader of Gerry and the Pacemakers and a cultural ambassador for Liverpool over the last 56 years. Marsden died yesterday at age 78.

I wouldn’t call Gerry and the Pacemakers a one-note, flash-in-the-pan group, but they pretty much stopped mattering when serious British bands began shifting out of spunky pop formula and into the next phase (deeper lyrics, complex recordings, psychedelic imaginings) in ’66 or thereabouts.

In any event we can’t all be lion tamers. Gerry is/was a beloved figure among long-of-tooth Liverpudlians. The poor guy had ticker troubles going back to a triple bypass heart operation in ’03. Marsden had a second heart operation in 2016. He announced his retirement in November 2018.

Boogahloogahloo, muh babay…this Boston Dynamics robot video surfaced last Tuesday (12.29). As always, Hollywood Elsewhere is Johnny on the spot…five days later. How many days, weeks or months of work did it take to iron out all the dance kinks? The point, as Lt. Vincent Hanna would say, is that these guys (Boston Dynamics) are good. Most impressive robot demo ever.

YouTube comment (“Baudgaud“, early this morning): “I remember just a couple of years ago when these same automotons had horrid balance and articulation problems. I particularly enjoyed watching the bipeds fall over like a drunk doing field sobriety tests, and seeing the quads rolling forward and backward like a solid-state slinky while trying to go up and down stairs. I expected the new demo to show improvement, but this is just fantastic. Perfect song for the new generation of balance and movement tech!”