Journo pally on yesterday’s “Gotta Be Mulligan” riff: “I talk to a lot of AMPAS voters including actors, and I keep hearing enormous enthusiasm (unsolicited) for Sophia Loren‘s performance in The Life Ahead. I wonder why she isn’t on any of these handicapper lists? And I haven’t heard anyone mention Vanessa Kirby (Pieces of a Woman) or Zendaya (Malcom & Marie) at all.”

HE to Journo Pally: “You’re mostly talking to long-of-toothers, right? Or are you also talking to the Leonardo DiCaprio, Jonah Hill crowd? Loren is excellent in Edoardo Ponti’s remake of Madame Rosa, and it’s wonderful to see her in a good role again. I’m guessing some of them are feeling a nostalgic or generational kinship with Loren. She’s very good in the film — solid gravitas, earnest, compassionate, quietly affecting.

When a well-known actor breaks through with a potential Oscar-calibre performance, it’s either because they’ve delivered the best default performance…the ultimate version of the kind of character they’re strongly identified with (Gregory Peck in To Kill A Mockingbird, Al Pacino in Scent of a Woman). Or because they’ve broken some kind of new ground, and nailed it to boot.

Loren definitely did the latter in Vittorio De Sica‘s Two Women (’60) and Ettore Scola‘s in A Special Day (’77). Her performance in The Life Ahead is not a groundbreaker but a quality-level ratifier of a classic Sophia Loren signature role.

Last night I was watching this Crimson Tide scene, which I happen to regard as a thing of beauty. Several Naval officers sitting around a mess table and discussing the nature of war and military command, etc. Sounds academic, right? And it might have been with a less-efficient helmer and a script that hadn’t been written and re-written to perfection by a packed roomful of screenwriters (including an unbilled Quentin Tarantino). It could have played like one of those boilerplate scenes that directors need to include for the sake of basic exposition and defining the lead antagonists, but which are usually dispensed with as quickly as possible for fear of losing tension, or even boring the audience.

Instead director Tony Scott, aided and abetted by dp Dariusz Wolski, editor Chris Lebenzon and Hanz Zimmer‘s subtle scoring, makes this three minute and 33-second scene feel gripping and vital. Because he’s foreshadowing — letting you know exactly what’s coming. During my first viewing I quickly sensed this strategic undercurrent. And I melted with pleasure at the 2:20 mark when Zimmer’s all-male choir began to gently hum as Denzel Washington explains what Carl Von Clausewitz actually meant when he said “war is a continuation of politics by other means,” and that ultimately “the nature of war is to serve itself.”

At this exact moment last night it hit me how much I miss dialogue scenes of this kind — expert applications of exactly the right kind of undercurrent at exactly the right moment. I’m not calling this kind of thing especially deep or profound, but it pushes the pleasure button just so, and makes you feel great. (And yet if the music isn’t applied with just the right emphasis and at just the right point, it can usurp audience trust.) Call it high enchantment or a ring-a-ding-ding effect — a massage-y feeling that gets you in the gut. The best mainstream commercial films often communicate in this fashion. They how to sell themselves like cagey hustlers pulling off a clever scam — they know it, you know it, and they know that you know it and nobody cares. Because you want them to keep it up.

Music-enhanced dialogue scenes that work as well as this one aren’t all that plentiful these days. A lot of directors probably think that Scott is resorting to some kind of sappy, old-hat trick — but it’s not if you do it right. I’m trying to think of an equally affective moment in Nomadland, Trial of the Chicago 7, Ma Rainey’s Black Bottom, Mank, One Night in Miami, The Father, Minari, Da 5 Bloods, News of the World, Promising Young Woman and Soul. Give me some time…I’m working on it. 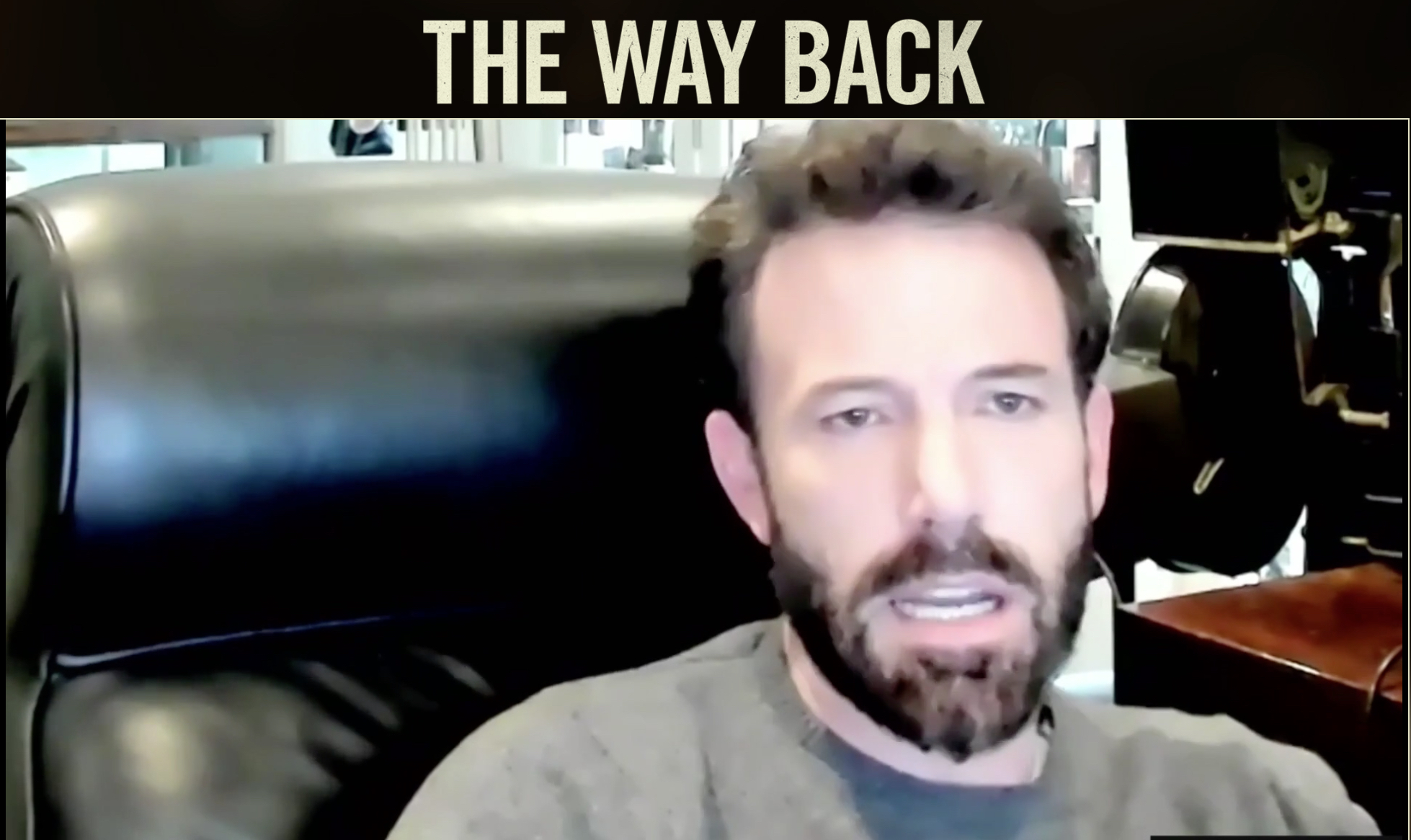