This is a terrible, terrible ending….”that really sucks, lady!” But a little riff by Esquire‘s Anna Grace Lee kinda blows too.

The first snafu is the headline — “An Alternate Titanic Ending Has Been Revealed and Boy, Did They Dodge a Bullet.” The alternate ending was actually posted on YouTube seven and a half years ago — 9.27.13.

And then Lee describes the last shot as follows: “And then we watch the epic transformation of the dark ruins into the vibrant vision that was the ship before disaster, where all the passengers greet young Rose as she reunites with Jack.”

Yeah, true, except what we’re actually seeing is Rose being greeted by dead people (characters who knew Rose before going down with the ship) as she enters a dreamscape version of the first-class grand salon.”

What makes this fantasy scene perfect is that it’s a musical number from a stage production of Carousel sans melody, especially with Leonardo DiCaprio waiting atop the staircase and facing the grand clock. And because it confirms what we all want to believe, that upon the moment of death we’ll be greeted by friends and family as we return to some form of life eternal, and with white light streaming in.

“What do you…Rita! how are you!…Bob, how do you explain that lifeless Alexander The Great flick with Richard Burton, Claire Bloom and Fredric March? I mean, that movie just laid there like an uncooked, unseasoned filet of flounder. You need to jump into something, man…I don’t know, some kind of intense, contemporary, character-driven thing. Something about pool sharks or street gangs, something loose and jazzy and French New Wavey…” 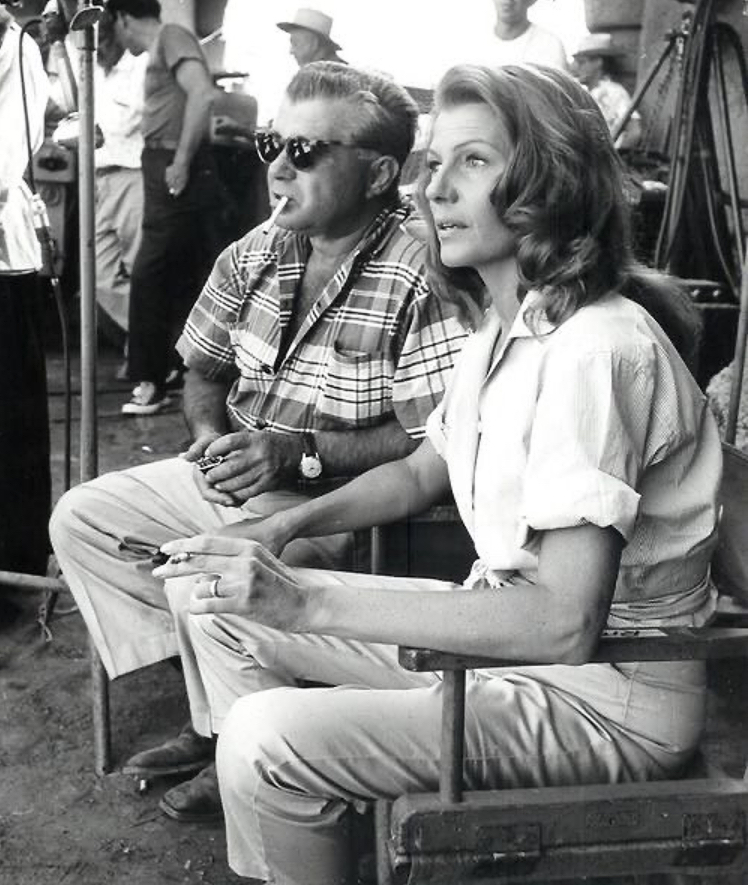 39 Comments
Feelings of Dread and Despair

Last night I marathoned through all four episodes of Kirby Dick and Amy Ziering‘s Allen v. Farrow (HBO Max, 2.21.). Speaking as a longtime Woody Allen admirer and defender, I found it unsettling, more than a little disturbing and, I regret to say, a half–persuasive hit job. I was impressed with the chops, the craft and the sculpting, but I took notes as I watched and here’s a sampling:

“This is a hit job, probing but selectively so…a one-sided presentation, a stacked deck…Mia’s tale is so sanitized, so chaste…beware the perverted monster…I have to admit that it feels creepy…’smothering energy, suffocating closeness‘….Woody was clearly too invested in an emotionally intense, overly touchy relationship with Dylan…directions on how to suck his thumb?…this is so FOUL…give me a break!…so the Yale-New Haven investigators were determined to exonerate Woody?…why would they go to such lengths to distort?…why would they destroy their notes?…Paul Williams was muzzled?…what about the three kids who died under Mia’s care, two of them by suicide?…this is very bad for Woody but at the same time it’s not an open book, warts–and–all approach…the doc is totally in the tank for the Mia narrative.”

All through the first three hours (the fourth is mostly wrap-up) I was…be honest…quietly horrified. A pit of my stomach feeling that began to spread into my spleen. A terrible sensation. As in “oh, no…”

For 29 years I never realized (and nobody ever told me) that Soon-Yi is pronounced Soon-EEE, not Soon-YEE. Five words: “Jeff, the ‘Y’ is silent.”

Allen v. Farrow is a hit job, all right, but at the same time I was persuaded that what was being presented was honest as far as it went. The doc DOES lie by omission quite a lot, but I was also persuaded that the overly intense affection that Woody exhibited for Dylan was wrong. I could feel it. Diseased. Not right.

Then again Showbiz411‘s Roger Friedman might have had a point when he wrote that someone needs to give Mia a special Oscar for the performance of her life.

I just can’t understand Moses Farrow and his 5.23.18 “A Son Speaks Out” essay. What he wrote doesn’t square AT ALL with the Mia, Kirby & Amy narrative that sank into my system last night. So who’s lying? Mia is obviously lying by omission, but so, it seems (what else am I to think?), is Moses apparently, and I feel so angry about the possibility that he might’ve led me down the garden path.

What kind of diseased dysfunction would goad Moses into blowing that much smoke? How could he write what he wrote and not mean it? I’m almost beside myself with fury.

Moses’ essay, after all, has been the cornerstone of my belief in Woody’s presumed innocence for three years now.

And really…how is it that in all of his 85 years Woody never ONCE violated or over-stepped with anyone else? It’s so baffling. One single five-minute horror episode that happened on 8.4.92 when he was 57 years old, and the rest of his life is essentially spotless. My understanding of human behavior argues with what I saw last night. At the same time there was that awful feeling…

How in God’s name did those nannies let Woody take Dylan away like that? They had been put on HIGH ALERT, for God’s sake. “Don’t let him be alone with her,” they were told. He clearly had what seemed like pervy or at the very least inappropriate inclinations, etc. What kind of sociopath nanny would let Dylan go off with him? They looked for Woody and Dylan for 20 minutes and couldn’t find them? Frog Hollow isn’t that big.

I just took Clayton Davis‘s “How To Avoid Being Too Much of a White Person When You Vote for Year-End Awards” quiz. The idea is to check off all the current award-seeking films that (a) meet the Academy’s forthcoming diversity requirements, and (b) fall under the categories of Representative (20), LGBTQ (10), Taboo Issues (5), Disabilities (5) and Women Filmmakers (15). One point per film. 55 points total.

Clayton statement #1: “It’s important to say what this form is NOT. It is not a demand that you vote for these films. It is not a guide for a diversity quota so more people of color are represented in the film industry. It is not a document made to make a voter feel guilty about liking Green Book more than Roma or preferring Crash to Brokeback Mountain.” [HE comment: In 2018 and early ’19 there was definitely a coordinated campaign to shame and belittle fans of Green Book — it won the Best Picture Oscar anyway.]

Clayton statement #2: “It’s deeply believed that if industry voters have enough films of diverse and inclusive voices, there will never be a need for any quota or mandate, as people fear or suggest. To go further, Hollywood executives and producers will see the return on those investments with box receipts. Films like Lee Daniels’ The Butler ($116 million) and Get Out ($176 million) were smash hits with modest budgets, with the latter winning an Academy Award for best original screenplay (Jordan Peele).”

2020 films that are vaguely or mostly Anglo-favoring, non-representative, non-LGBTQ, non-taboo, etc.: Underwater, Dolittle, The Gentlemen, The Last Full Measure, The Rhythm Section, Birds of Prey, The Lodge, Horse Girl, Fantasy Island, Downhill, The Last Thing He Wanted, The Night Clerk, The Invisible Man, The Way Back, The Burnt Orange Heresy, Swallow, The Hunt, Lost Girls, The Roads Not Taken, Never Rarely Sometimes Always, Resistance, The Main Event, Extraction, Bad Education, The Wretched, Capone, Blood and Money, The Lovebirds, Artemis Fowl, The King of Staten Island, You Should Have Left, Irresistible, Greyhound, Palm Springs, An American Pickle, Waiting for the Barbarians, Tesla, Bill & Ted Face the Music, I’m Thinking of Ending Things , The Devil All the Time, The Nest, Blackbird, The Trial of the Chicago 7, Kajillionaire, The Boys in the Band, On the Rocks, The War with Grandpa, A Rainy Day in New York, Borat Subsequent Moviefilm, Jungleland, Let Him Go, Hillbilly Elegy, Mank, Dreamland, Sound of Metal, The Christmas Chronicles 2, Uncle Frank, The Prom, Let Them All Talk, Wonder Woman 1984, News of the World, Promising Young Woman, Pieces of a Woman.

When your constituents are suffering from a lack of electricity during extremely cold temperatures, only a stone sociopath Senator would fly to Cancun in order to bask in mid ’80s heat. It doesn’t matter what Ted Cruz‘s administrative abilities may have been to help alleviate the situation. Winging off to Mexico at the height of a major disaster is comically atrocious theatre.

It’s basically a rightwing thing — the world is for the few — some are able to climb to the top but most struggle in the middle and many slide to the bottom….that’s life!

Truth-Serum Cruz: “I happen to be one of the few creme de la creme types with the option to escape this Arctic nightmare. What do you want me to do, hand out free blankets and extra underwear off the back of a truck? Hand out free hot coffee? If you don’t like the fact that I’m in Cancun, tough shit. Try and vote me out if you can, but let me tell you something — the dumbshits who support me like the fact that I’m chlllin’ in Cancun. Because they’d like to be here with me.”