Maher again: “72% of GenZ say they’d like to be an online celebrity, and 54% of GenZ and Millennials say they would become an influencer, ‘given the opportunity’. If, you know, it wasn’t too much work, like making a sex tape. Speaking of which…

[Starting at 4:40] “I can’t be in this time when we’re madly on the hunt for anything with the slightest whiff of white privilege, and then feel badly for…Paris Hilton? Quite the reverse — maybe it’s Paris who owes us an apology. For being Patient Zero for today’s vapid, entitled, famous-for-nothing culture. She kind of birthed the world in which every 15 year-old with a phone aspires to be an influencer. She’s the face that launched a thousand little shits.

You can usually spot the likeliest Best Picture contenders from a pretty fair distance. Narrative, brand-name filmmakers, strong performances, woke-friendly theme, middle-class or family values, likely to be strongly promoted. By my count there are roughly 40 2021 films that could conceivably make the grade. But when you boil it all down and eliminate those are seemingly too popcorn, too genre, too weird or too indie-marginal…well, it cuts the list down.

Here’s a wild spitball roster based on intuitions, gut feelings, hairs on the back of the neck and little devils and angels sitting on either shoulder. By my count there are three films of color, and they’re all big musicals — Liesel Tommy‘s Respect, Lin-Manuel Miranda, Quiara Alegría Hudes and John Chu‘s In The Heights and, I suppose, Steven Spielberg‘s West Side Story, which is half Puerto Rican. The latter two could become contenders.

Plus the two Shakespeares — Joel Coen‘s The Tragedy of Macbeth (A24, presumably late ’24) and Robert Eggers‘ The Northman (more or less based on the Hamlet saga, Focus, late ’21).

That’s a total of 8 plus the two musicals makes ten.

What am I missing? Which of the top ten picks seems questionable?

Plot-wise, there isn’t a Bluray on my living room bookshelf that couldn’t be complained about by the 2021 woke mob. Bill Maher is correct — they’re almost all offensive by today’s standards. I’ll just put on a blindfold and pick at random…

Here’s one…Howard Hawks‘ Red River (’48)…a racist cattle baron from Texas (John Wayne, who vented his racist views in a 1960s Playboy interview) assembles a team of white cowboys to drive his cattle herd to Missouri, where the cattle will fetch a decent price. White guys and steers, white guys guys and steers…start to finish, no let-up. (And there were definitely Black cowboys in the Old West.) Despite the appalling history of what western white settlers did to Native Americans in the late 19th and early 20th Centuries, the natives are depicted as whooping savages looking to kill innocent whites. The one Native American character with dialogue, Chief Yowlachie‘s “Two Jaw Quo”, is described in denigrating terms to Walter Brennan‘s “Groot” character.

Here’s another…Tony Gilroy‘s Michael Clayton (’07) — a seemingly racist New York law firm (not a single prominent POC attorney in sight) is defending a chemical manufacturer called U-North in a multibillion-dollar, six-year-long class action lawsuit, the company having been accused of killing numerous users of a weed killer. George Clooney‘s titular character, an Irish “fixer” with a Black secretary but without Black friends or colleagues (and who regularly plays in a downtown, mostly all-white-guy card game), is told to handle an embarassing episode involving a white colleague, Arthur Edens (Tom Wilkinson)…enough.

One more…Michael Mann‘s Collateral (’04) — In a story that works as an across-the-board metaphor for white exploitation of Black victims, a Los Angeles cab driver of color is more or less forced by a sociopathic (and possibly racist?) white male assassin to passively participate in a series of murders. Worse, the white sociopath shoots an older man of color in a jazz club and thereby traumatizes the cabbie. Still worse, the sociopath charms the cab driver’s mother in a hospital room and thereby creates feelings of rage and resentment in the cabbie. Finally the white sociopath forces the lethargic cab driver to wake up, man up, save the life of a beautiful but vulnerable U.S. attorney who’s taken a shine to the cabbie, and to basically take charge of his life. Basically a film about trauma, terrorism and heartlessness, totally unmitigated by the climactic killing of the white sociopath by the cabbie, and the body of the dead assassin left sitting on a metro car and just making laps around the city, nobody noticing or caring. None of this matters — what matters is that a black cabbie is totally pushed around by a white killer.

Critics and audiences live on separate planets. And critics live within and certainly write for their own cloistered community. Joe and Jane Popcorn know this and regard their opinions accordingly. There are several independent, X-factor, emotionally attuned, basic instinct critics and columnists (like myself), but most critics wear the same monk robes and the same open-toed sandals and drink the same goat’s milk.

Plus critics tend to herd together for safety’s sake. Right now that means most of them are bending over backwards to praise films of a woke caste. Everyone knows or at least believes this. Nothing new here.

I’ve just read through a 3.15 report by statistician Stephen Fellows, titled “Are Film Critics Losing Sync With Audiences?” The answer, boiled down, is “yeah, but not actually or not altogether, or at least not so you’d notice.”

A 3.19 Daily Mail summary of Fellows’ report, written by Adam Schrader, concludes the following: (a) Fans are more likely to agree with films rated highly by critics than those rated poorly by critics; and (b) Fellows’ study concludes that a “de-synchronization” between how fans and critics review movies has taken place consistently over the past 20 year..

Fellows also notes that “factors that influence the discrepancies are a film’s budget and genre.” This seems to indicate what most of us have known for decades — audiences are more generally more supportive of tried-and-true familiarity — and therefore more willing to trust and submit to large-budget genre films than critics. Likewise critics tend to be more accepting or supportive of small-budget indie and non-genre films. Is anyone shocked?

Near the end of Fellows’ report, he states the following three conclusions:

“(1) There is a strong correlation between the average scores of critics and film audiences; (2) However there was never been complete synchronization; and (3) there has been a de-synchronisation taking place fairly consistently over the past two decades.”

So critics and audiences tend to agree about the good and the bad, but they’ve nonetheless been drifting apart for the last 20 years? What does that even mean? Fellows report is tell us nothing we don’t know, except he’s injected a tone of fuzzy vagueness.

HE default #1: “Most critics tend to be dweeby, cerebral, analytical-to-a-fault types. You can tell that by just looking at some of them. Guys who never got the girl in high school — portraits worth a thousand words. And for the most part they process films in cerebral, academic terms — as objects of study rather than journeys.

“Hollywood Elsewhere has always gotten the feeling thang, of course, along with a relative handful of top-dog critics — Ann Hornaday, Owen Gleiberman and Todd McCarthy, not to mention the late Roger Ebert, Pauline Kael and Andrew Sarris. An old truism still holds. If you suppress or sidestep the emotional current, you’re missing the essence of a film or certainly a good portion of it.” — “What 90% of Critics Don’t Understand,” posted on 4.26.20.

HE default #2: “[There’s long been] an elite cadre of ivory-tower snobs who have done and are continuing to do their level best to convince Average Joe ticket-buyers to be highly suspicious of critical opinion, if not utterly dismissive of it.

“RT & Metacritic ratings can certainly nudge them or intensify already established feelings or suspicions, but it’s rare when a tide is totally turned. Silver Linings Playbook was a rare example of a movie that really turned and gathered a following after an initial ‘naaah, don’t think so’ attitude on the part of younger women. There are exceptions, thank God, but mostly audiences can ‘smell’ something they want to see or vice versa.” — posted on 8.3.17.

Good Samaritan Tatiana wanted to cheer me up, and so she insisted on treating me to a dinner at Spago on Canon. “It’s so loving and good-hearted of you, but I don’t want to go to a place that attracts tourists,” I said. We went anyway.

We sat in the indoor, open-air patio section with a nice view of one of the fires. We shared three dishes — risotto something-or-other, Black Sea Bass and pizza with Scottish salmon and sprinkled with red caviar.

Me to Tatiana: “Oh my God!…this is the most delicious pizza I’ve had in years, perhaps decades…it’s wonderful!…thank you so much, mon cheri, for insisting on doing this!”

20 or 25 minutes later the actual, real-deal Wolfang Puck, smiling and gentle-mannered and wearing a white chef’s jacket, came over to to wish us well. “How are you guys?” he said. I repeated my wild salmon pizza enthusiasm and Tatiana said everything was great. She didn’t know our visitor but that was okay. The mood was cool and easy.

Tatiana: “Hello, I’m Tatiana, I’m from Russia.” Wolfgang: “I’m from Austria.” Tatiana: “Are you chef?” Wolfgang: “Well, yes…I’m the owner actually.” Tatiana: “What is your name?” And he told her, of course. 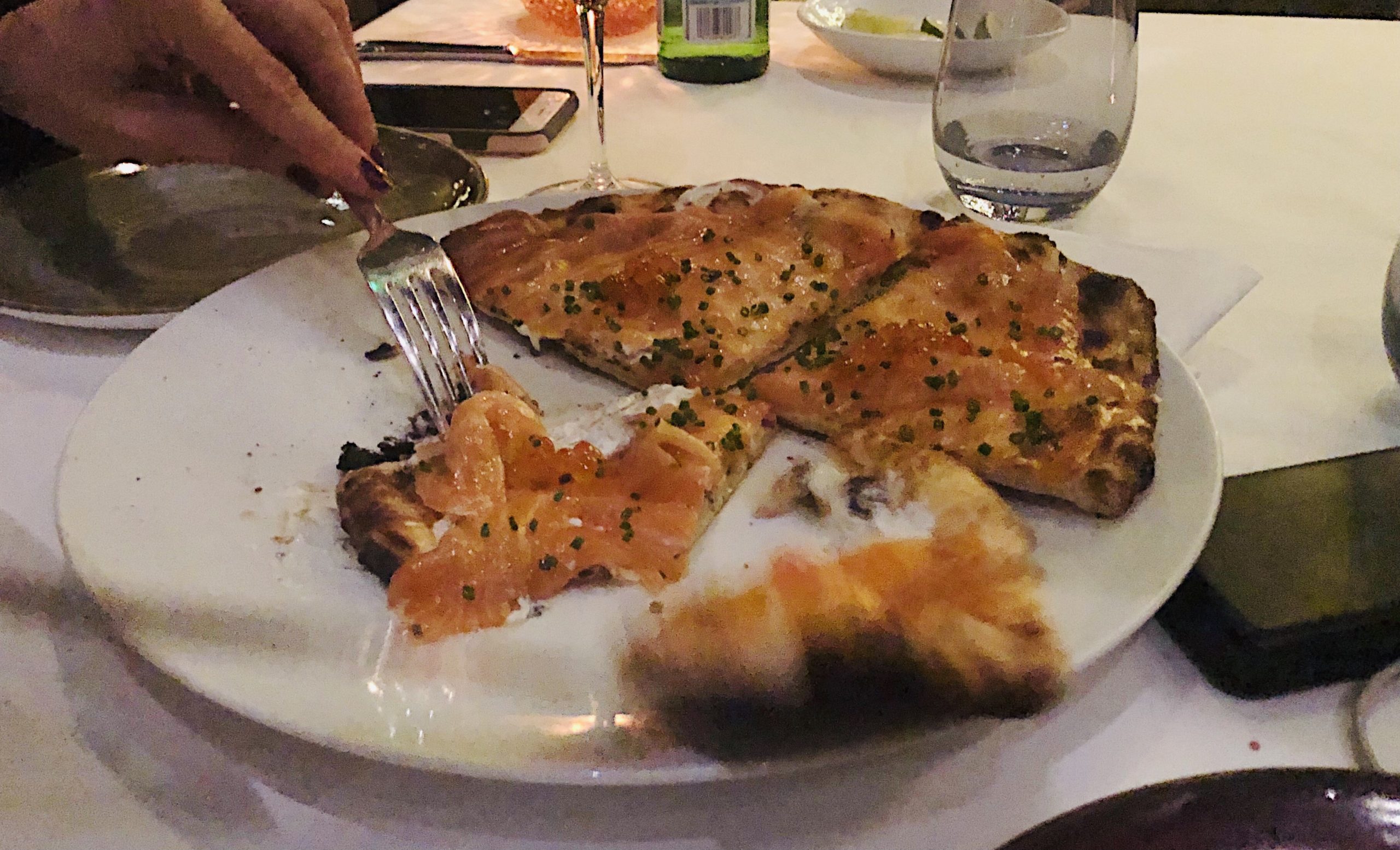 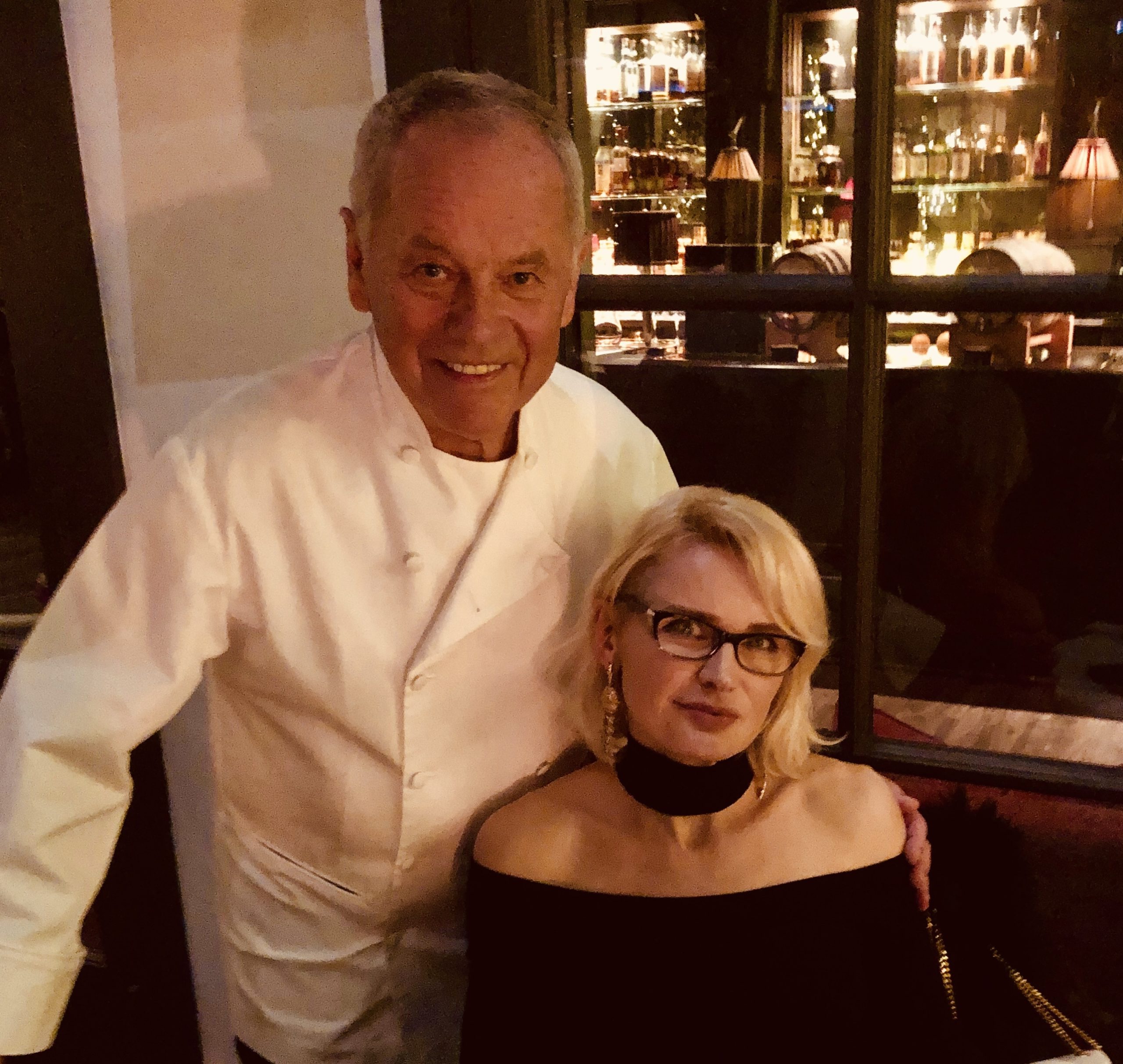 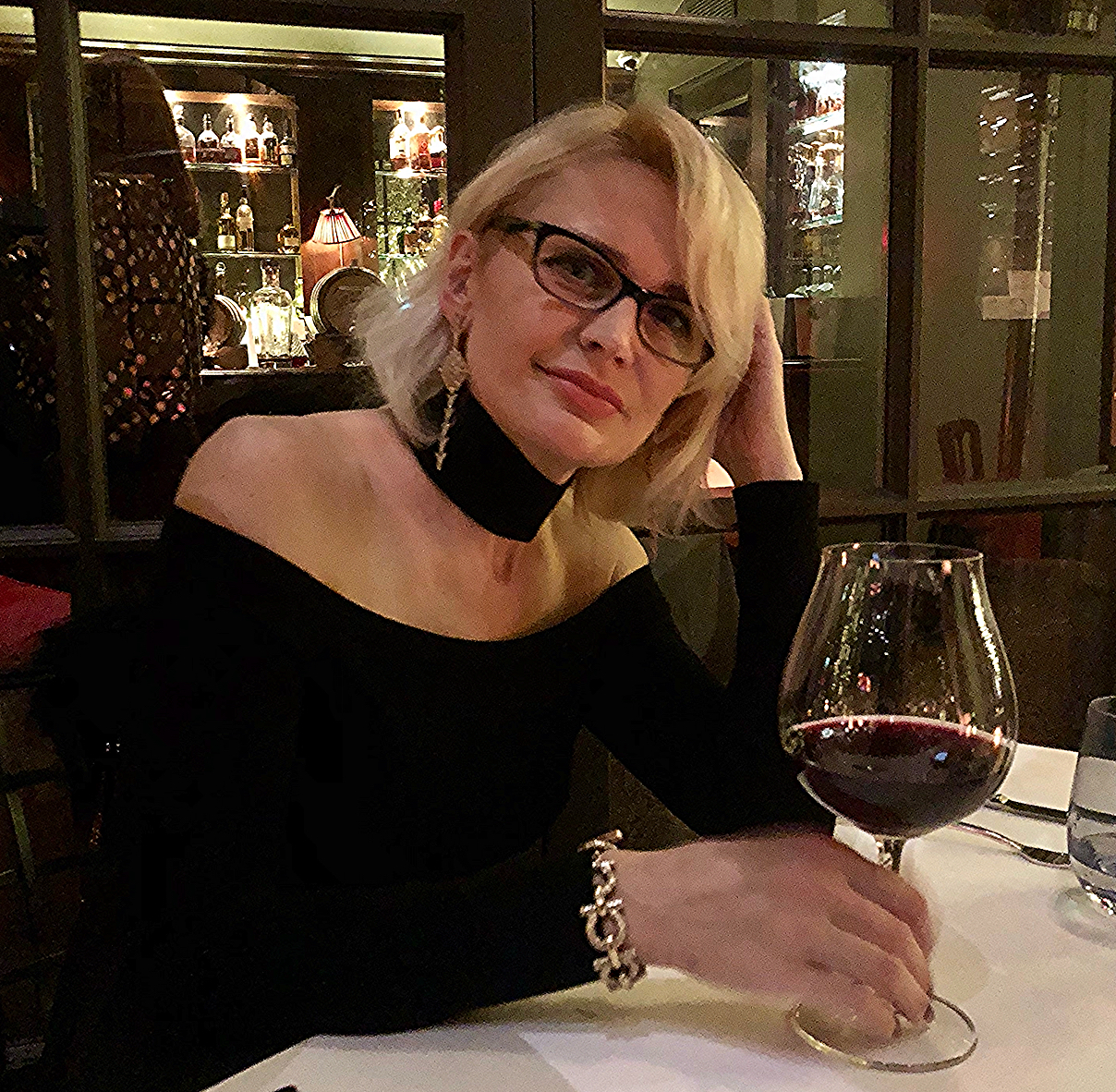 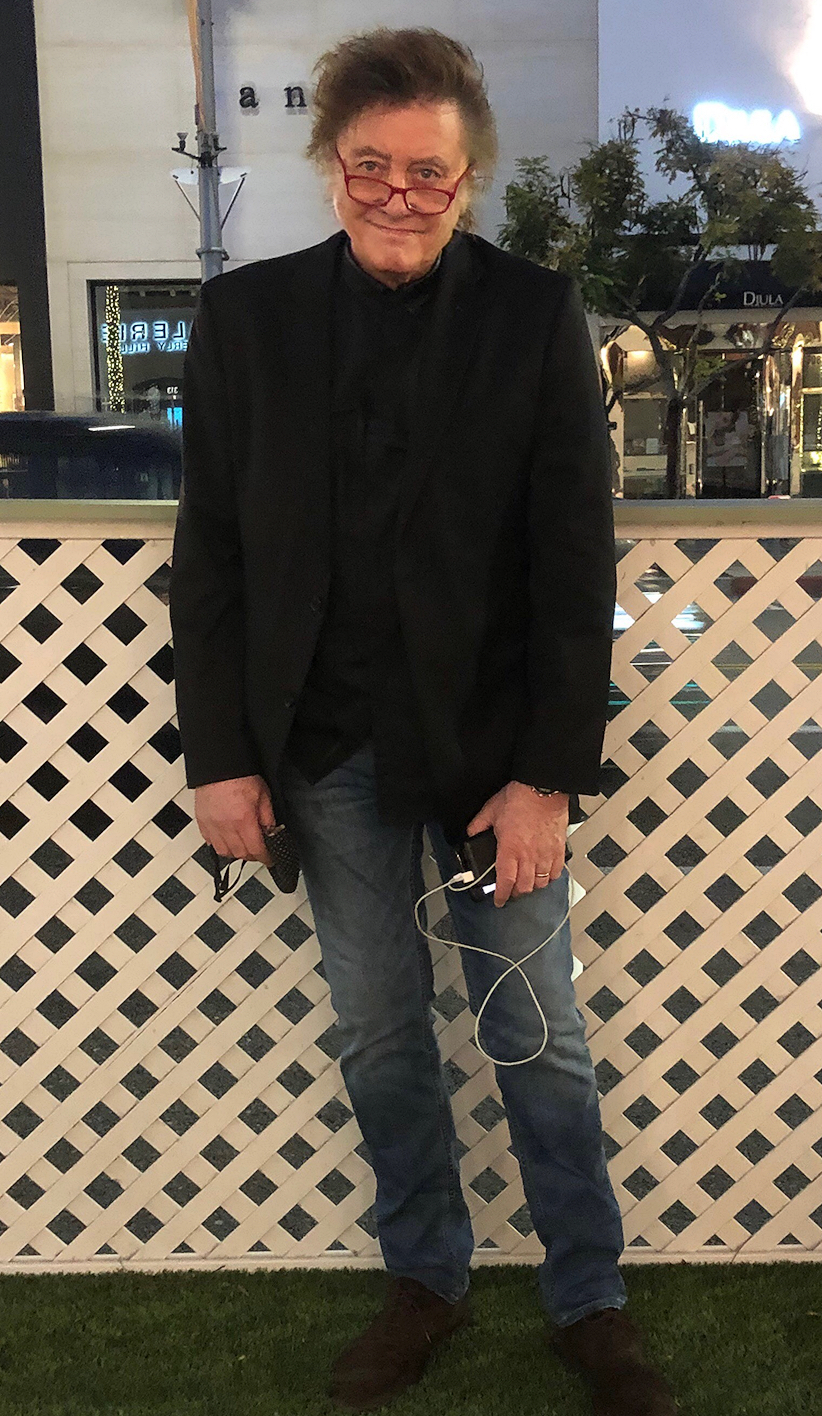