Reality Must Be Faced

The daily jazz-spewings and soul-searchings of Hollywood Elsewhere have been totally free-of-charge for 16 and 2/3 years, starting in August ’04. I really wish I could keep going like this, but ad revenue has been dwindling over the last three years, largely due to Khmer Rouge wokelisting. I regrettably have no choice but to convert HE into a paywall site. It breaks my heart but the situation is the situation.

I became a significant journo player in the early ’90s when I began with Entertainment Weekly and the L.A. Times “Calendar” section. I became a weekly LA Times Syndicate columnist starting in the fall of ’94, and then a biweekly online columnist (Mr. Showbiz, Reel.com) in October of ’98. HE independently launched in August ’04, and the daily bloggy-blog format kicked in in the spring of ’06.

Alas, Wokester Robespierre-ism (i.e., pushed by the sensibilities of Millennial and Zoomer-aged agency buyers) has resulted in moderately diminished ad revenues over the last three years. 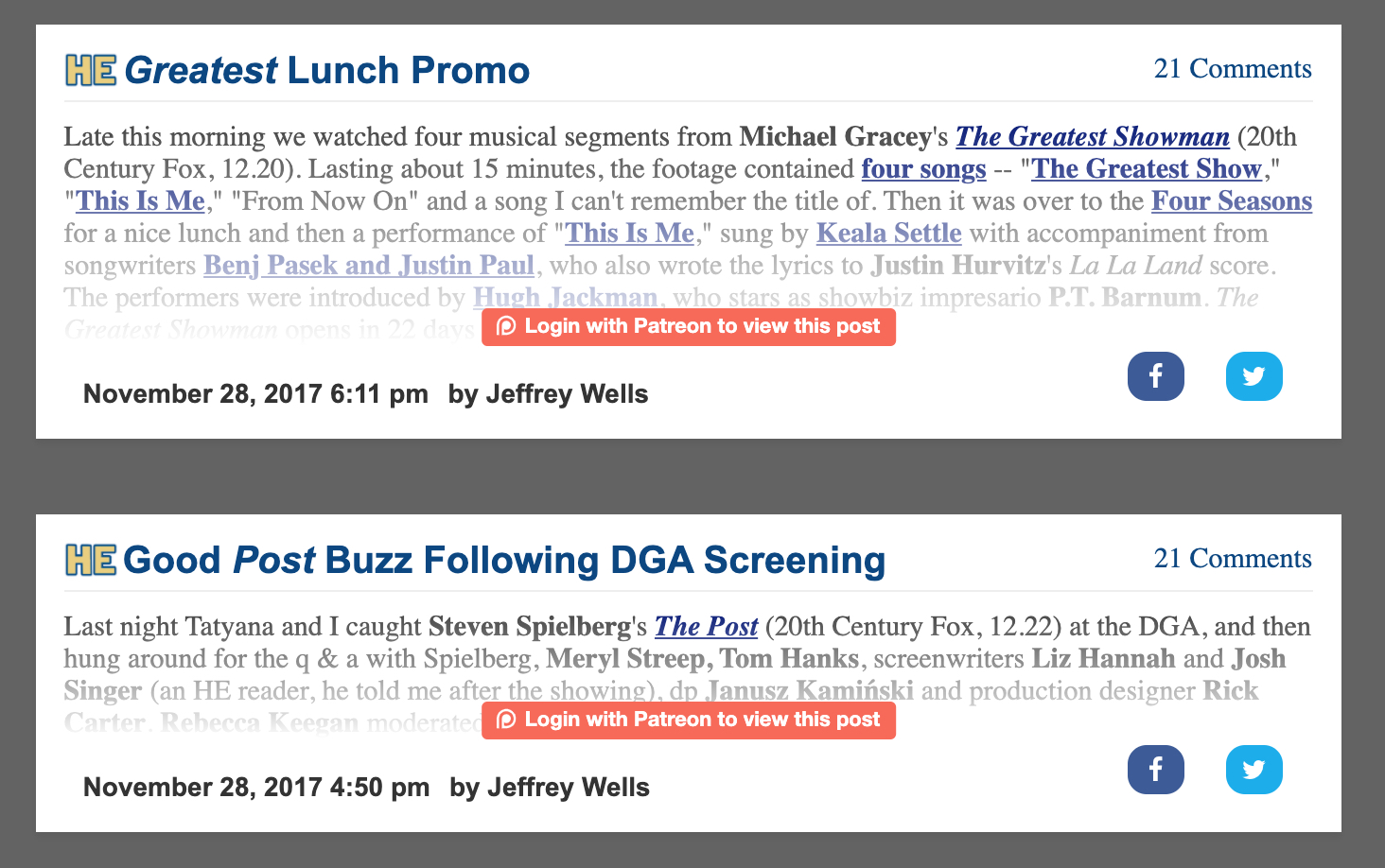 Just to be clear, HE will NOT become a Patreon site but a similar self-created paywall site of my own specific design and contouring

I’ve been working on trying to transfer HE into a total paywall site (or a mostly paywall one) for the last three months or so. In December-January my son Dylan, who’s always been super-brilliant at this stuff, created a test system with Patreon. Except I’ve decided that I don’t want HE to be a Patreon site. I want to have my own paywall revenue going straight into my PayPal account.

And yet I want to create the same kind of deal that the Patreon thing would have been. Readers would be able to read the first four or five lines of each story before it fades into grayness and then nothing….unless they’re a subscriber. Or something like that.

In ’18 and ’19 I tried a separate paywall site called HE Plus — the idea was that one or two stories would be paywalled on HE Plus. But doing this made me feel overwhelmed, like my head was a cantaloupe being split in two. I tried and tried but it was driving me crazy. I couldn’t continue it. I was ready to shoot myself.

I’m figuring that for the new thing I would charge a $5 monthly cheapie rate OR $10 monthly for an enhanced HE experience — (a) regular daily column plus (b) access to bimonthly serialized HE novel installments plus (c) a bi-weekly podcast plus (d) access to ’90s and early aughts columns archived and re-formatted and re-examined. Or a $70 annual flat rate for the highest access of everything.

This is similar to what Graydon Carter‘s Air Mail and the Daily Wire charges.

I’m currently speaking to a couple of people to help install this new system. It’s not that tricky. WordPress has a paywall function. I’m sure it will all pan out. I want to be up and rolling by May 1st or May 15th…sometime around then.

HE to loyal readers who’ve been with me since ’98: I’m very sorry that economic conditions have forced me to do this. I wish I could just keep going for free. Alas, I can’t. Ad revenue will continue (Oscar + Emmys) but as long as wokesters are making the ad-buying calls it won’t be enough.