The following is a rough blend of a riff I wrote this morning along with friendo reactions…it’s a bit of a bumpy ride:

Friendo #3: “Here’s the one thing I’d add, and I think it’s crucial. It’s not going to be like this, year in and year out. We’ll have some of that vibe, but this is a fad, a fetish, a current obsession of WWS (woke white supremacy). It’s really a pure expression of white supremacy. That’s one of the reasons it’s so fucking embarrassing. Last night wasn’t just jaw-dropping — it was high camp. ”

Friendo#1: “The awards attendees reflected the huge number of POC nominations, voted upon by the increasingly diverse membership.

“Even so, the event did seem more like the BET awards. And three Black visitors watching in my home were embarrassed by the over-wokeness of the whole enterprise. ‘Trying way too hard’ was the judgement.

“In short, the white woke Academy is still over-compensating for its recent #OscarsSoWhite past.

“Plus there was no FUN…no entertainment, no clips. The nominees looked like wax figures as they were introduced.”

THR‘s Scott Feinberg: “The Oscar telecast producers also leaned into diversity in their selection of presenters, which is admirable, although one can’t help but wonder what middle-America made of the fact that only four of the 18 presenters — Bryan Cranston, Brad Pitt, Harrison Ford and Joaquin Phoenix — were white males.”

HE: I’m hesitating to share an impression that millions probably had last night. I’m even hesitating to mention it to you guys. The impression (I’m emphasizing the “i” word as opposed to something more specific) is that the Oscars had suddenly become much more diverse, dominantly so, and that the lethal nightmare of police bullets was hovering or massing just outside Union Station.

It wasn’t all that, of course, with a healthy but modest amount of palefaces (Glenn Close, Laura Dern, Reese Witherspoon, Harrison Ford, Brad Pitt, Carey Mulligan) sprinkled into the smallish, Greek amphitheater dinner cafe. But still…

The fact is that for the last 90 years (or since the telecast began appearing on home screens in the early ‘50s) the Oscars have largely reflected an industry that has…well, actually not mirrored but under-represented the racial makeup and character of this country — currently around 61% Anglo, 13% to 14% African American, 18% Latino, 5% or 6% Asian percentage and a smattering of other tribes. The truth of the makeup of the film industry was probably honestly reflected in the mostly-white complexions of those who attended in decades past…

But all in a flash, Americans who watched last night were suddenly contemplating a new mandated reality, and in strikingly visual terms — an African American Oscar community that was happy to be there and to celebrate diversity and achievement but was also grieving over the deaths of so many African Americans by hair-trigger cops.

For those relatively few Americans who watched the show it almost certainly came as a bit of a shock…trust me, for those accustomed to the notion of the 61-39 split and those who live in the suburbs and rural areas where the Anglo percentage is almost certainly higher, and even to those who reside in mostly white and largely gay West Hollywood…

And especially for movie mavens who’ve been watching since the JFK, LBJ and Nixon eras, the visuals in last night’s show said “roll with it, America…this is the progressive vision of 2021 America…of diverse, progressive, inclusive Hollywood and the America it believes in…a culture that is now (to go by visual impressions) half Black — not 13% or 14% African American but seemingly or possibly 50%…a culture in which progressives have decided that the experience of African Americans has been under-represented and under-respected for too long, and that for the best of reasons it’s time to (am I allowed to think this?) over-represent the POC experience (not to mention the #MeToo perspective and the LGBTQ current), in part due to a general urban-liberal consensus that hinterland white folks and especially older alpha white males are bringers and enforcers of evil (racism, murdering cops, Trump supporters, Proud Boys, Oath Keepers, Fox News watchers, U.S. Capitol occupiers, mask refusers, Republican-controlled legislatures that are now conniving to suppress voters of color by passing new-styled Jim Crow laws) and that the stain and toxicity of white privilege has to be trimmed, Twitter-whipped, schooled, diminished, Critical Race Theory’ed and Robin D’Angelo’ed in order to make the US of A into a more just, compassionate, fair-minded society. 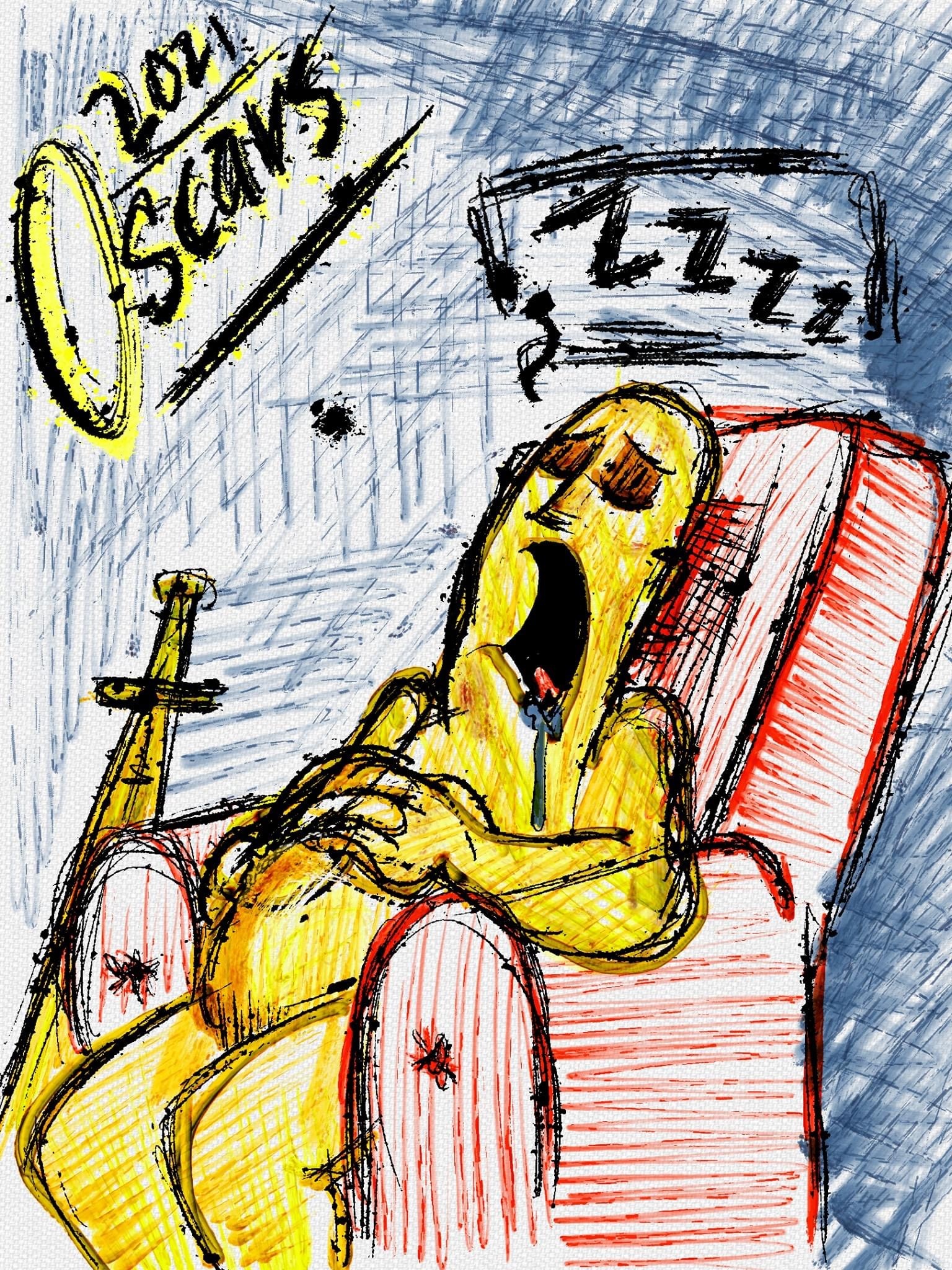 All of this came WHOMPING out of TV screens last night, and on top of (a) the decision to emphasize origin stories and warnings of police shootings in the acceptance speeches, (b) the absence of film clips, (c) no red carpet gowns, (d) no sassy humor, (e) no singing or dancing as well as Chloe Zhao wearing Chinese pigtails and white sneakers and the whole odd feeling of alternate Union Station rules and regulations, including Frances McDormand’s vaguely surreal wolf howl…

It was a strange, at times sodden or sad, and even a mildly alienating night of 170 stars or more precisely attendees…I hate to even think this but I fear that if I, an eccentric if reasonable left-center WeHo fellow, felt a teeny bit jarred by the import of last night’s show then many millions of older Joe and Jane Bumblefucks out there also felt a tiny bit “whoa!”-ed out by the Soderbergh Oscars, then I fear that the midterm elections of 2022 will be affected by this impression. I hate to say it, but I fear it.

Friendo #3: “All true, and all brilliantly stated on your part. And, of course, no one else would say it so honestly. Everyone in America saw it the way you described it. Period.

“Yes, McDormand and Hopkins won the top two acting awards, but were the votes that supported them a reflection of the idea that the industry is ‘ambivalent’ about diversity? Or were they a reflection of the fact that their competitors simply didn’t deserve to win?

HE: “Except that Frances McDormand wasn’t the best — Day was. So it’s never really about that. It never really has been. It’s about what makes you feel good by voting for this or that nominee. Plus this was the first time since the mid ’90s that the winners of the Globe and SAG didn’t take the Oscar. So you see something was radically different. What’s funny sort of is that the Globe voters were being chased around and called racists and yet their wins were more inclusive — Andra Day (who deserved to win) and Boseman. Tough call with Hopkins, who was very, very good.

Friendo #3: “Yeah, but newcomers like Andra Day never win, and Frances McDormand was much, much better than Viola Davis.”

Jordan Ruimy: “The Oscars overdid the inclusivity portion of the ceremony. My semi-woke sister was complaining to me via text last night about how they were shoving a message down our throats.”