On or about 11.18.21 Jett Wells and Caitlin Bennett, who were married on 9.22.17, will be bringing a daughter into the world. The burden will be on Cait, of course, with Jett offering the usual spousal backup. Jett was born on 6.4.88 at Valley Presbyterian Hospital in Van Nuys. Possible names: Maeve, Ripley, Parker. Cheers all around. 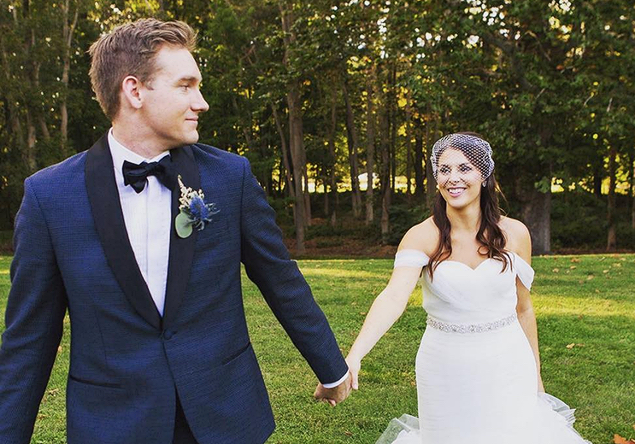 Definitely The Queen’s Gambit Anya Taylor Joy and Mare of Easttown‘s Kate Winslet. WandaVision‘s Elizabeth Olsen will also be nominated, I expect, but she won’t beat Joy/Winslet. I never watched Cynthia Erivo‘s Aretha (Genius), partly because I have this idea in my head that Jennifer Hudson‘s Respect will be more definitive, Aretha biopic-wise. I haven’t yet watched The Underground Railroad (I’m told it’s a chore) or I May Destroy You so I have no opinion about Thuso Mbedu or Michaela Coel. For what it’s worth I agree with the below-stated opinion of Daniel Fienberg. 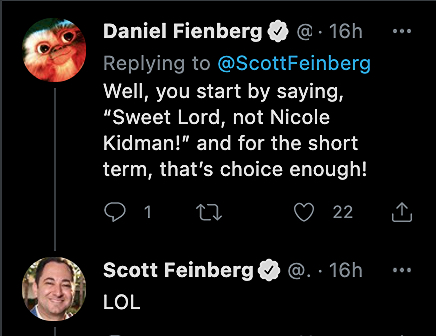 Angie Dickinson: Who knows more about movie cameras? You or me?
Dean Martin: Maybe you.
Angie: Ever directed anything?
Dean: Nope.
Angie: How do you adjust the focus?
Dean: Beats me.
Angie: Is it this little wheel doo-dad?
Dean: Hey, how come you’re dressed like Cyd Charisse in a Fred Astaire movie?
Angie: Gee, Dean, I dunno. 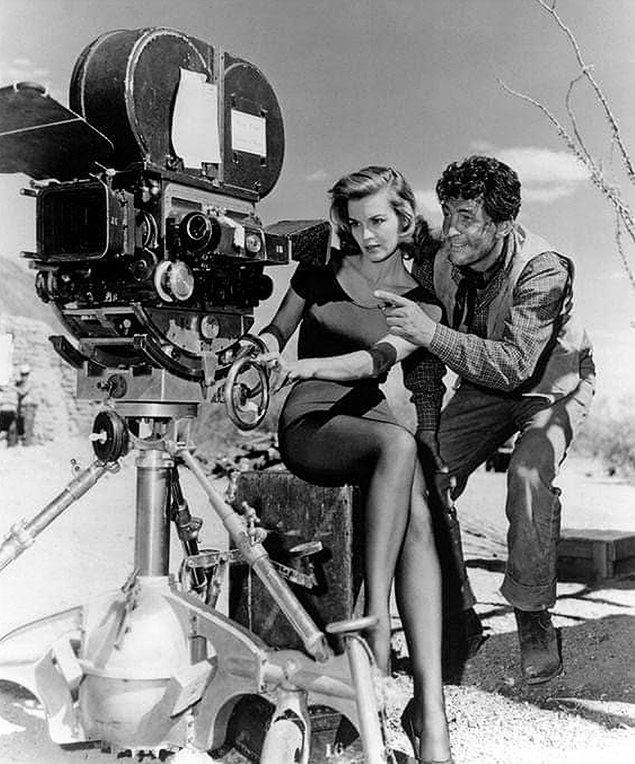 Dean: Because ya got great gams?
Angie: Howard told me to wear tights.
Dean: Can you dance?
Angie: Not like Cyd Charisse.
Dean: So what’s this movie about anyway? Besides me playin’ a drunk and Duke and I facin’ down the bad guys every so often? And singin’ a couple of songs with Ricky Nelson?
Angie: It’s Howard’s answer to High Noon.
Dean: He told me it’s a hang-out movie.
Angie: Yeah?
Dean: Yeah.
Angie: What’s a hang-out movie?
Dean: One that kinda ambles along.

In a N.Y. Times op-ed titled “Could Matthew McConaughey Be All Right, All Right, All Right for Texas?” (5.9.21), Texas Monthly executive editor Mimi Swartz asks “would Mr. McConaughey run [for governor] as a Democrat or a Republican? That’s as much a mystery as the meaning of his soliloquy at the end of True Detective.”

The basic impression is that McConaughey is a kind of “philosopher king” type, which may or may not add up tactically if he runs for Texas governor. The best way to get a line on MM’s thinking, apparently, is to read his self-penned “Greenlights,” a book of practical thoughts and philosophical guidance which published last November.

Swartz ends the piece with “may the best man win, man.” Translation: McConaughey is too vague and flaky-sounding to cut the political mustard.

The complaint is that the HFPA doesn’t really seem to mean it and/or hasn’t gone far enough in cleaning up their act. Giving their 2021 Best Director award to Chloe Zhao and their Best Actor and Best Actress awards to Chadwick Boseman and Andra Day were insincere gestures, the thinking seems to be. At this point the specifics don’t seem to matter. One way or another the HFPA seems to be more or less fucked. At least for now.

Nobody loved the HFPA dilletantes before — they were “tolerated” in a shoulder-shrugging, eye-rolling sense of that term, and now distributors and talent are saying “okay, fuck these guys…even with the announced reforms they aren’t woke enough, not by 2021 standards, and now, trust us, they’re about to understand the cost of their terrible folly.”

So if the Golden Globes are wiped out who takes their place as an Academy-reflecting body that hands out pre-Oscar awards and gets the buzz rolling? The Critics Choice Awards, right? I’ll bet those guys are gloating as we speak.

Not to defend the blithe, lackadaiscal HFPA, but we’re living through punitive, tumultuous times — a climate of institutional fear and intimidation — “think right, run your organization right and say the right things or your ass is grass, pal.”

Is the HFPA a secret stealth branch of former Ku Klux Klan members or something? Some of the HFPA-ers are known to be less than ardent in their support of wokester reforms, but mainly they’re just a group of gravy-train hustlers and opportunists. Nobody in the Hollywood promo machine had any serious problems with them before. Everyone played along. But now, out of the blue, Hollywood’s “woke” Twitter mob has given them the heave-ho. It’s an avalanche effect.

Nobody wants to be on the “wrong” side of this — if you’re not with the mob you’re suspected of being in league with suspected racists, or certainly people who don’t “get it.” You have to condemn without ambiguity these days. You have to come down hard. This is roughly analogous to what everyone did to stay safe in early ’50s Hollywood — they had to distance themselves from the accused, name names and declare loyalty to the established order.

Do Joe and Jane Popcorn care if the HFPA reforms are sweeping enough? Will they care if and when the GG awards don’t happen early next year?

NBCUniversal statement: “We continue to believe that the HFPA is committed to meaningful reform. However, change of this magnitude takes time and work, and we feel strongly that the HFPA needs time to do it right. As such, NBC will not air the 2022 Golden Globes. Assuming the organization executes on its plan, we are hopeful we will be in a position to air the show in January 2023.”

I began by dismissing Mare of Eastwood on the mere basis of atmospheric gloom and wretched characters with all kinds of downmarket maladies and addictions. But episode #2 put the hook in and I’ve been on board ever since.

As mentioned earlier I’ve managed to put aside my issues with Kate Winslet (cravenly apologizing for working with Roman Polanski and Woody Allen in order to curry favor with #MeToo Academy types and possibly land a Best Actress nomination for Ammonite) and have even become accustomed to the Easttown demimonde and their endless summonings of moods and vibes most of us would rather not absorb.

Winslet’s “Mare” is a good generational match for Guy Pearce‘s Richard Ryan, who’s been romantically appealing from the start, but it makes no sense at all for Evan Peter‘s Detective Zabel, her investigating partner, to have a competing interest — at 34 he’s way too young for the 45-year-old Winslet, and he seems like a fool to be saying stuff like “I’m only interested if you’re interested” and “Mare, all my cards are on the table.” Dude, you can do better.

James McCardle has a face I’d love to punch repeatedly, and his Deacon Mark Burton is obviously a dangerous sicko. I decided last night that I won’t be happy until a mob gangs up on his ass and maybe throws him off a bridge.

Earlier today I was hit with another “I can’t even” from another HE reader with the same old “why can’t you just focus on movie dreams and echo-fantasies while putting real-world unpleasantries aside?” I’ve lost count but let’s imagine this is the 47th such reply…

As a film obsessive since age 4 or 5, HE has labored to engage with everything worthy or even half-diverting in the movie kingdom (except for Marvel/D.C. and low-rent horror). I’ve been doing so 24/7 for 17 years straight (and 23 years if you count the Mr. Showbiz & Reel.com columns). There isn’t a single particle of “Hollywood fantasy meets metaphorical transportation” that I haven’t personally swooned over or attempted to grapple with…many decades under the influence.

Then again you’ve presumably noticed that the double-ass whammy of the pandemic + the white-liberal Robin D’Angelo virus are major political & psychological currents in the film industry right now, and that THINGS HAVE CHANGED in a way that begs comparison with what Paris suffered through in the early-to-mid 1790s.

Did you watch the Soderbergh Oscars by any chance? If you were a resident of Prague in late August ‘68, you’d be saying “God, enough with the focus on Soviet tanks already!” As an HE friendo remarked a while back, the building is on fire and you’re thinking it’s just a warm day.

There’s no separating the spaghetti from the sauce.