This morning a scolding, legend-in-his-own-mind type sent me the following clip… 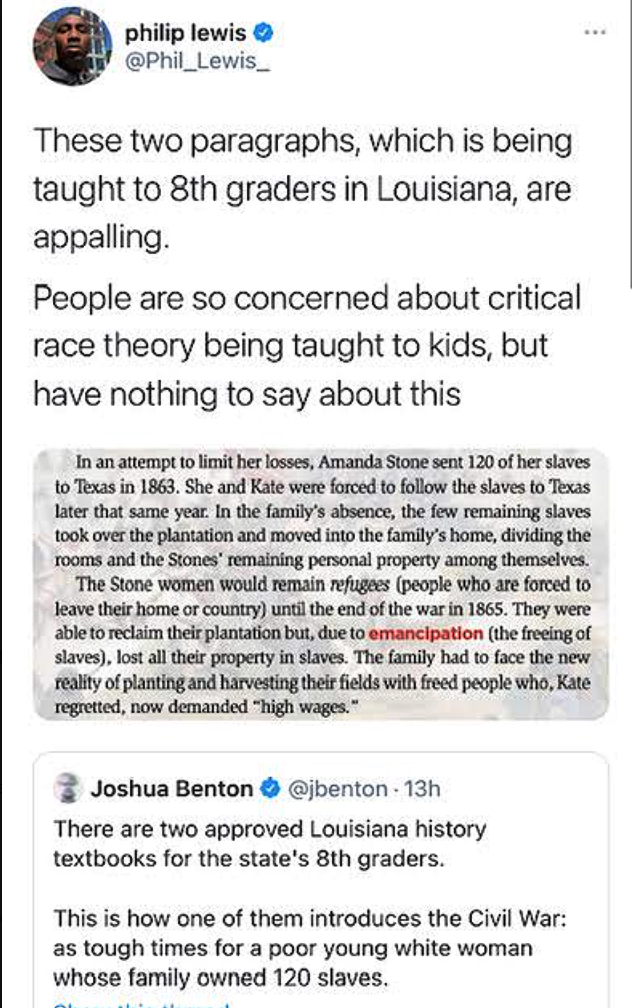 HE response: “Obviously a disreputable viewpoint…a delusional, racially-slanted view of Civil War-era history. What’s your point? P.S. — hooray for the slaves who took over the Texas plantation and moved into the bedrooms!”

Scolding guy: “The point is, contrary to your blinkered, ill-informed perspective on the topic, this is the sort of bullshit that Critical Race Theory — the actual material, not the Robin DiAngelo bullshit — seeks to correct. It’s not a ‘religion,’ it’s not ‘Marxism’…it’s a response to over 200 hundred years of lies and romanticization. And to the nonsense that complacent whites believe — like when a black business can’t get financing in a white neighborhood, it’s because they have a bad credit score.”

HE response: “Apart from correcting bad information, Critical Race Theory, as you well know, advances the side-door notion that there is an inherently evil, Satan’s spawn quality to whiteness. And that the only measure that can lift this stain of evil from Amrican Anglo Saxon culture is to submit to intense CRT training and study. You know this, I should say, but you won’t admit it.

“An army of fair-minded people…Bari Weiss, John McWhorter, Bill Maher, Joe Rogan and the entire left-centrist, centrist and conservative population and many, many sensible parents of grade-school children are appalled and horrified about kids being taught that whites are inherently evil. Everyone out there understands this bullshit plain as day….except for woke myopics and fanatics like yourself. Because of you and your brethren, we may be doomed to suffer under President Ron DeSantis for four or eight years, starting in January ’25. Historians of the future are going to despise wokesters like nothing before or since.”