I’ve rarely felt so bummed and thrown by a film as I was after seeing Paul Thomas Anderson‘s Inherent Vice at the 2014 New York Film Festival (10.4.14). I was so destroyed that I couldn’t find the spirit to attend the Tavern on the Green after-party. I just jumped on the IRT south…I had to get out of there.

“I need to think about Inherent Vice a bit before writing anything. It just broke an hour ago and then I just hopped on the train. I was thinking about it while I was watching but that only got in the way. A friend wrote and said ‘how was it?’ Here’s what I wrote: ‘Oh, dear God…maybe it’ll come into focus after I’ve seen it a second or third time, or when I catch in on Bluray and can access the subtitles. Maybe by then I’ll have grown enough as a person or as a moviegoer or as a dog catcher. Maybe someday I’ll be as perceptive as Drew McWeeny or Scott Foundas.

“One thing’s for sure and that’s that I just wasn’t hip or smart or observant enough tonight to really get down in the swamp with Inherent Vice. I kinda got where it was coming from but I couldn’t get to a place of delight. I certainly got portions of it. I know I chuckled at a few lines. But I’m basically too fucking stupid or my ears are too full of wax or something. So it’s me — I’m the problem and not PTA.

“Vice is a meticulous recreation of an early ’70s film complete with dirt and scratch marks…it’s like you’re watching a semi-decent print of a film made in 1971 at the New Beverly in 1986. It really is an immersion and a half. Beautiful atmosphere, perfect Nixonian vibe, bleachy lighting scheme, ultra-dry humor, Aryans, dopers, a Neil Young tune or two, endless manner of perversity and duplicity and what-the-fuck-ity…but I couldn’t figure out a whole lot. Some but not enough. It’s in, it’s out, it’s back in again, it moves left and right, it drops its pants, it takes a hit, it bongs out again…it makes your brain feel like cheese that’s been left on the counter overnight, and it goes on for…what, two and a half hours?

“If only I was smarter…if only I could hear more of the dialogue…if only I had several lines of heroin to snort while watching it. You know what? Forget the plot. Solutions are for squares, man. Just submit to the period-ness and let that be enough. Let Joaquin Phoenix‘s mutton-chops rule. Doobies, sandals, hippie chicks, waves, the residue of Manson, shiny 1970 cars…all of it, dude. Be a ‘yes’ person.”

“Vice Mets The Public“, posted on 12.14.14: I really don’t want to hang with Joaquin Phoenix‘s Doc Sportello again, man. I hated his company like nothing else. Vice is far from thoughtless or haphazard and certainly deserves respect for PTA’s meticulous composition and use of…was it one or two Neil Young tunes? But I didn’t give a damn who did what (and neither did Thomas Pynchon — I get that) and I didn’t care about anyone in the entire cast except Martin Short.

“Pynchon fans might argue that Inherent Vice is an entirely different bird than Robert Altman‘s The Long Goodbye and Joel and Ethan Coen‘s The Big Lebowski, but these films are still quasi-detective stories about low-rent loser types trying to make sense of a complex Los Angeles demimonde and scratching their heads and shrugging their shoulders at the perverse and ungainly sprawl of it all. I recognize that Vice is more liked than disliked by critics and that the HE comment symphony may take a few pokes at me, but I’m used to that.” 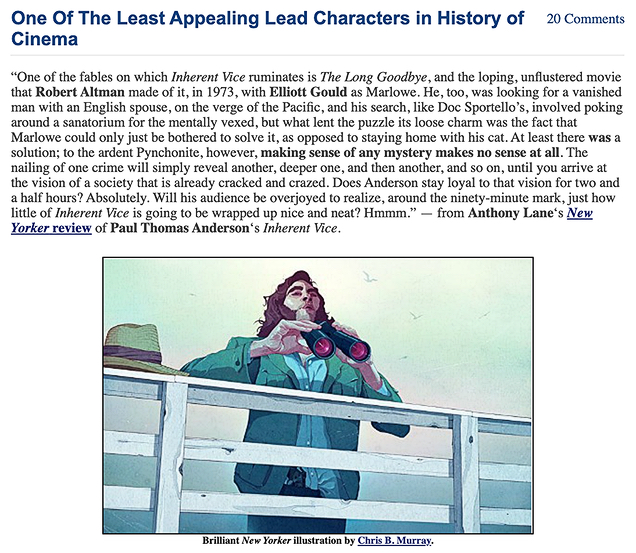 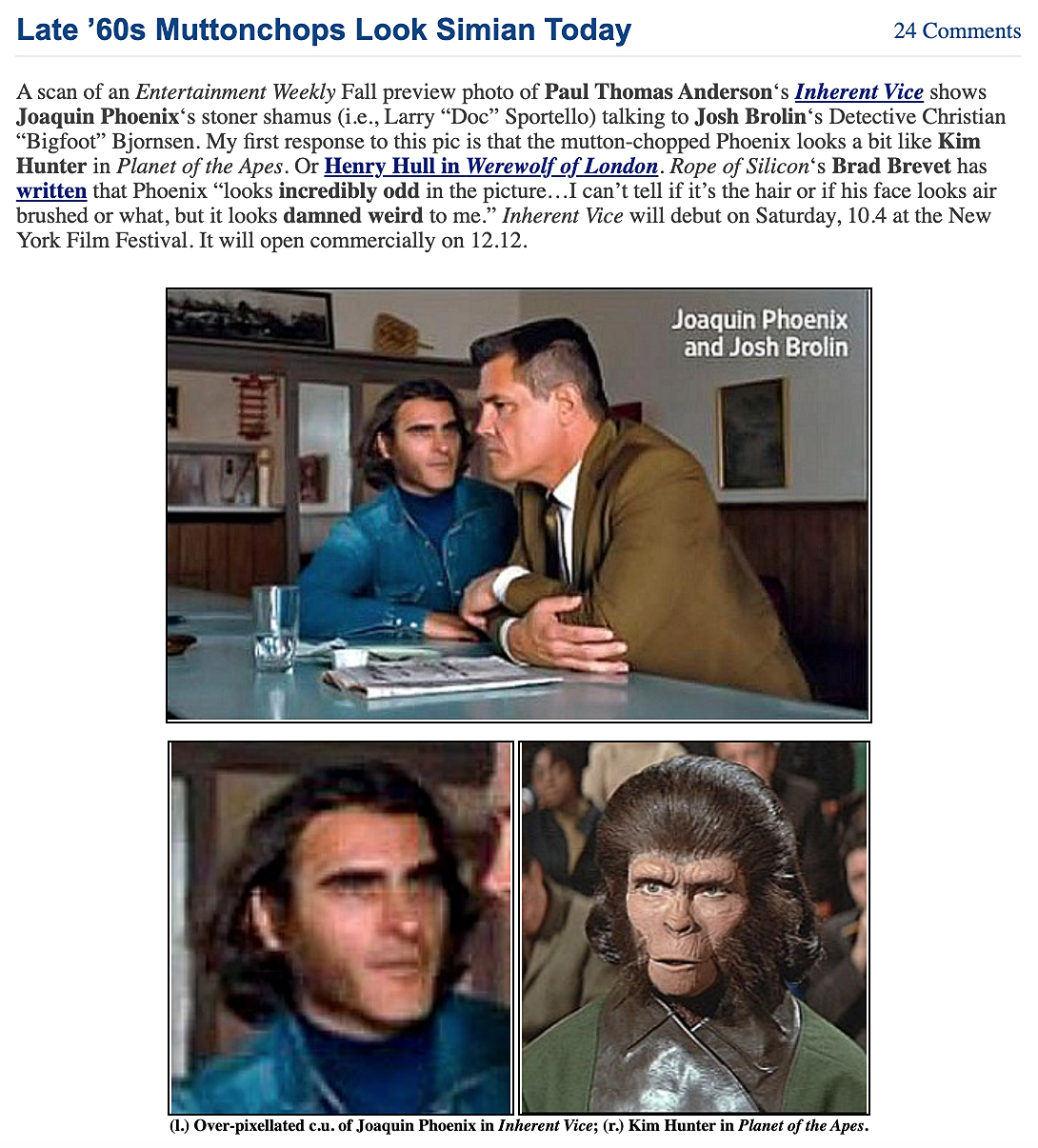