Support on Patreon Follow @wellshwood
41 Comments
No “Old” Specifics But…

I just saw M. Night Shyamalan’s Old. It delivers a hooky premise (wealthy tourists are unable to leave a cliffside cove in which the laws of time and biology are bizarrely suspended) but without much rhyme or consistency.

It’s interesting and trippy and semi-spooky — I was certainly never bored — but there are all kinds of loose ends and head-scratchy developments that don’t line up or unify. And yet despite the haphazard plotting it feels oddly intriguing.

In other words, the fact that the low-key horror elements don’t make sense or build into a cohesive whole strangely works in Old‘s favor. It feels like a first draft of an experimental creeper, written by someone new to the game who doesn’t care about following the usual rules. I was saying to myself “this is kinda sloppy but at least it’s different, and I’ve no idea where it’s going.”

And then during the final 15 minutes Old suddenly loses its nerve and turns logical — it tries to impose order by making sense of things (villains, conspiracy, arrival of law), and in so doing it betrays and destroys itself. A complete collapse.

As I left the theatre a guy booed. But without the imposition of logic and rationality during the finale, I’m betting that the booing guy would have been more accepting and perhaps even won over.

But of course rural bumblefucks don’t have common sense. Because they’re stupid bumblefucks who live in their own little vacuum-sealed Trumpian or Marjorie Taylor Greene echo chambers. 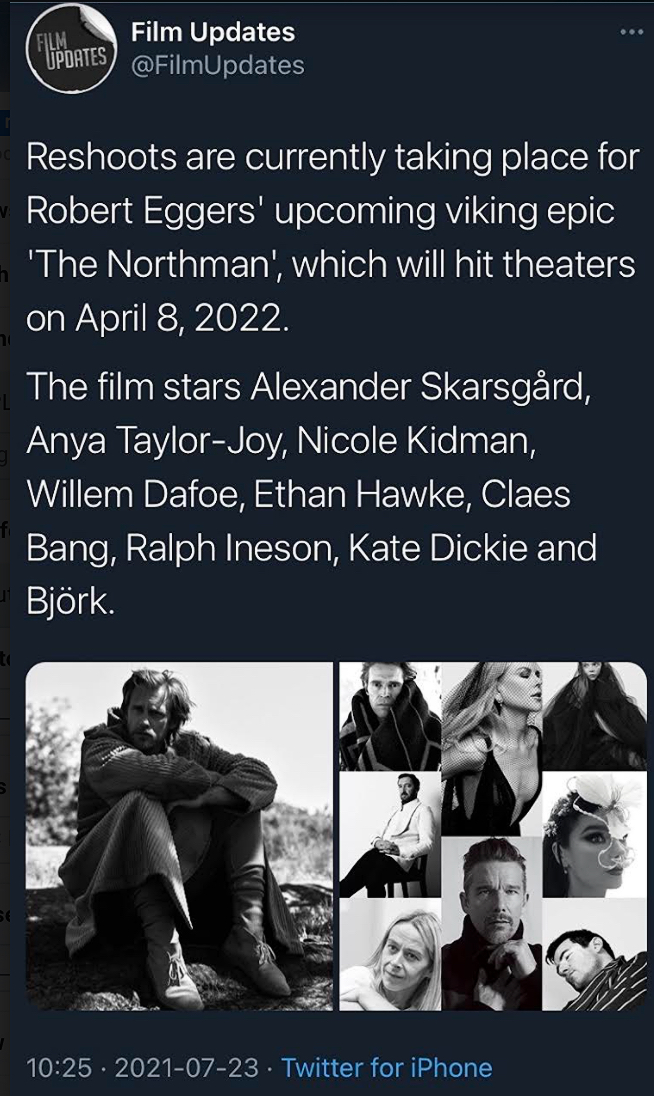 Bill McCuddy to HE (written last week): “I love you. You know that. I’ve been a fan for 20 odd years, but the column seems to be more for you than us. If this is The Sopranos, I want to be Tony, not Dr. Melfi. I know what I’m about to suggest involves more work, but the stories that I pay to see have to be mouth-watering. So far I’m dry coughing.”

HE to Friendo: “‘Mouth watering’? What am I, a hamburger chef? A gelato guy with a push cart? A trained seal? I bleed every day onto the keyboard and you’re saying ‘mmmm, I want more flavor, more gusto, better jokes, more pepperoni on the pizza.’ Jesus!”

McCuddy to HE: “The stuff we want to pay for has to be sexier and stickier, in my opinion. Air Mail is kind of getting it right but even they are struggling. I want you to succeed. Will keep you posted.

“P.S. For the record I’m fascinated with the evolution of the space and your battle with the Stalinist wokesters so, while I may in the minority, I’m good there. (Why not make all of THAT POLITCAL-CULTURAL SHIT the subscriber stuff?) And no, I’m not pissed that I wasn’t one of the insiders you gave a free pass to.”

HE to McCuddy: “Fine. Whatever. Thanks for the notes.”

McCuddy to HE: “Really or just being nice? Okay, I’ll take it either way.”

HE to Friendo: “What do you think I am, a news bureau here? A cable station with three anchors, four news writers, three tech guys, five producers and a couple of van drivers on call? I’m not Saturday Night Live, for Chrissake. It’s just me and the movies and whatever streams or opens and whatever happens on a real-deal basis…whatever comes to mind or pours out. I know you’re right, and that I have to generate more flavor, tastier ice cream, a dynamic twice-weekly podcast, steaks with more sizzle and drugs with more potency…I have to be a chef, a high-end drug dealer, a dramatist, a magician, an Uber driver, a comedian on the level of Dave Chapelle, a juggler, circus acrobat…all of that and more, and it still won’t be enough.

“Everything that happens or erupts goes into the column…everything including my entire 40 year history in this racket, my strange inability to see Nicolas Cage‘s Pig, not going to Cannes but going to the forthcoming Telluride Film Festival, my loathing of the Sundance and Toronto agendas, lost keys, trips to Prague and Zurich and Mexico, the souls of cats and kittens and pit bulls, lost wallets in the dumpster, side-eyes from fans of atrocious hip-hop at West Hollywood gas stations, lost iPhones, recollections of this and that…anything I can pull out of my head…fuck!

“Do you know of another one-man-band + long-standing bigmouth who generates even a third as much content? I’m not blah-blahing here…every day I’m digging fucking ditches.

“I’ve been grinding this shit out 24/7/365 since ’06 — 15 years straight. If you count the HE launch in August ’04 I’ve been doing it for 17 years. And 23 years if you count the launch of Mr. Showbiz and the other columns, beginning in October ’98. Every drop of blood I could squeeze out along the way, I’ve squeezed out. Every damn day and twice on Sundays, and it doesn’t matter. Nothing matters. And it’s not enough for Bill McCuddy.”

McCuddy to HE: “THAT’S NOT WHAT I’M SAYING. I’m saying to build a subscriber base you gotta reconfigure some of what you’re saying to make it more irresistible. It’s MARKETING, not changing. And what do mean ‘not enough for me”(?) I come at least three times a day!”

On 12.10.94 the Los Angeles Film Critics Association voted to give their Best Film Score trophy to Howard Shore‘s compositions for Tim Burton‘s Ed Wood. It may have been the first time that LAFCA has given such an award to an ironically composed score — one that was knowingly, wink-winkingly and brilliantly “bad”. Except that it wasn’t, of course. A better description might be that Shore was going for satirically banal.

Shore’s music was actually wonderful (and it still is), but you needed to listen to it with the right kind of ears. You had to understand that Shore had attempted to write music that might have been composed for an actual grade-Z Ed Wood film from the ’50s — cheesy-sounding but “in quotes.” Shore was more or less saying between the stanzas “do you get it?…the movie is kidding and so is the music.” There’s absolutely no question about Shore’s intent.

The LAFCA awards were handed out at the Bel Age Hotel on Saturday, 1.21.95, and longtime LAFCA member and L.A. Reader film critic Andy Klein presented the Shore award.

In his introductory remarks, or so the legend goes, Klein riffed on Shore’s music in a way that I’ve just attempted, calling it brilliantly insincere, satirically referenced, playfully composed, etc.

And yet to everyone’s surprise Shore was vaguely miffed at Klein’s remarks, or so I read afterwards. I don’t have a tape or a transcript of his acceptance speech, but I heard through the grapevine that Shore said something along the lines of “I don’t know what Andy Klein is on about but I didn’t write a score that was meant to be chuckled at.”

I asked Klein this morning if he could fill in the gaps. “The gist of what I said was that Shore managed to have it both ways — walking the line between being of the genre and being about the genre, as in campy,” Klein replied. “It was a compliment, suggesting he managed to do both. He took offense at the latter part, which struck me as weird.”

Question for HE commentariat: What other film scores could be fairly characterized as having been written ironically or with a general lack of sincerity? You could claim that almost any score for a comedy or a satirical genre spoof (like the score to The Spy Who Loved Me) might qualify as Ed Wood-like, but I don’t know. I’m not sure that anyone besides Shore has ever composed the same kind of score. You tell me.

I also believe that the opening Ed Wood credit sequence is absolute genius-level, and totally in keeping with the tone of the film.

I was going to say that Cleveland Steamers sounds cooler — that the idea of a baseball team steamin’ and chuggin along like a choo-choo train sounds more Cleveland-ish…a better fit for a rugged, working-class, rock-n-roll city like Cleveland. But then I looked up the local slang associations.

“We remember those moments, as we move forward with change / You see, it has always been Cleveland that’s the best part of our name.” — from ad copy read by Tom Hanks.

Together, we are all… pic.twitter.com/R5FnT4kv1I

All day yesterday I was telling myself “tomorrow is Thursday., and a chance to catch evening viewings of Old and Val.” (Wokester publicists are being their usual delightful selves in terms of screening invites. Love you guys!) This morning I was genuinely shocked upon realizing that today is Friday, 7.23.