Most Critically Loathed Kids Film Ever Made?

Richard Donner‘s Radio Flyer was mostly dismissed when it opened 29 and 2/3 years ago (2.21.92). People of taste were appalled. And yet this dreadful little film, which lost a ton of money (made for $35M, earned a lousy $4.75 million) has a current RT audience score of 73% — three out of four Joe Popcorn types approve!

I’m presuming that no one in the HE commentariat will defend Radio Flyer, but maybe I’m wrong. Obviously something about it appealed to people during the final year of the George H.W. Bush administration, but what exactly? The initial word was that it was a Spielberg thing, but of course it wasn’t.

HE question: What kind of diseased, depraved mother (i.e., Lorraine Bracco‘s Mary) marries an abusive animal (Adam Baldwin‘s unseen “King”) and turns a blind eye to abuse of her own sons? 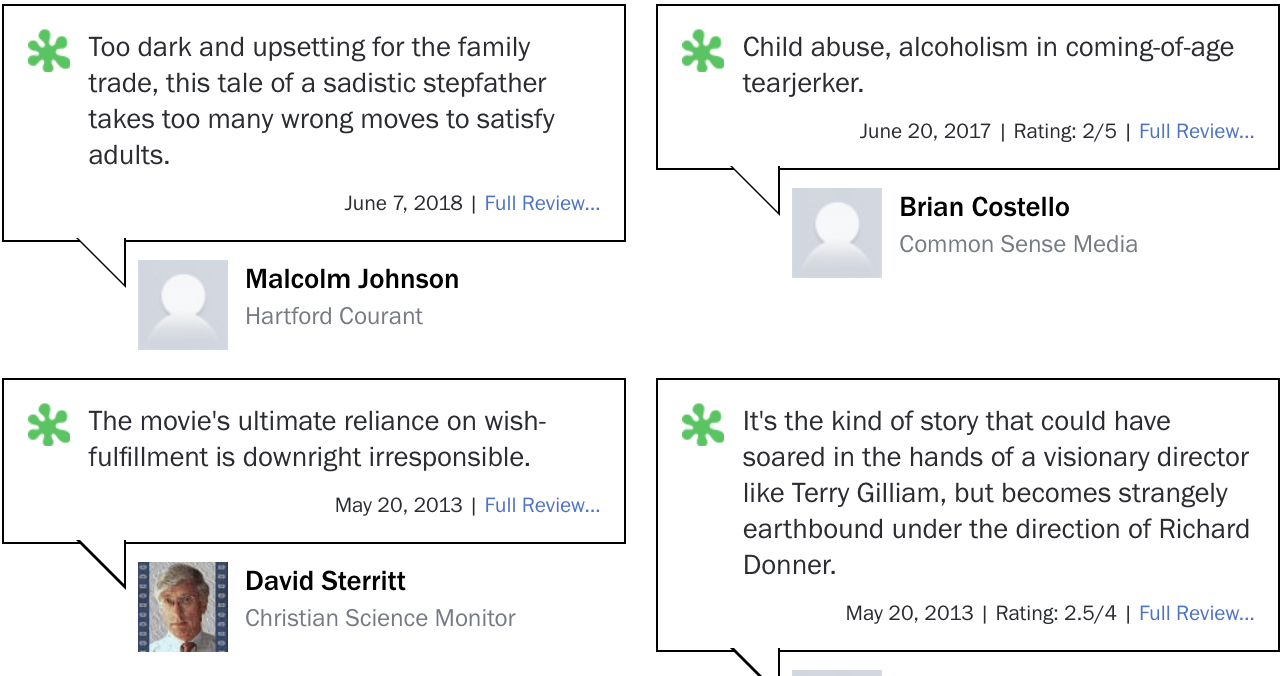 “As the boys roam their pastoral surroundings, each new encounter takes on the aura of a storybook adventure. They open the door to the toolshed, and a ‘monster’ pokes forth its bald, reptilian head; actually, it’s just the harmless old turtle who lives there. There are bullies to frighten them (and to frighten off with their trusty German shepherd). And there are wishful reveries inspired by their red Radio Flyer wagon — dreams of rolling off that big hill near the airport and flying, really flying, the way a boy named Fisher did years ago, when (according to legend) he powered his bicycle right up into the air.

“The music gushes, the late-afternoon sunlight glints, and one half expects to look up and see E.T. himself grinning from the nearest bush. Yet even as Radio Flyer seems a tribute to the magic of childhood, an undertow of darkness develops. The boys’ mother has quickly remarried; her husband (Adam Baldwin), a sadistic, beer-swilling roughneck, directs his rage toward quiet, defenseless little Bobby. We learn that he’s been beating the child, giving him huge brown welts all over his back. Bobby, though, is reluctant to tell his mother, and he makes Mike swear to keep his secret.

“For the entire movie, the stepfather’s face remains hidden in shadow. He appears, instead, as a malevolent specter: a hand reaching into the fridge for yet another six-pack, a voice barking out caustic threats. Radio Flyer wants to show us how a man this vicious could seem, in Bobby’s eyes, a kind of abstraction, less a human being than a monstrous force. At the same time, the movie suggests that children escape intolerable situations by withdrawing into a cocoon of streamlined fantasy.

“Donner keeps his camera at a serene distance, so that we seem to be eavesdropping on the two boys. Elijah Wood, in particular, holds the screen — he has a beautifully inquisitive face, with eyes like liquid marbles. Despite flashes of sensitivity, though, the movie is so rigid and programmatic about contrasting its light and dark sides — the horror and the dream-retreat — that it seems fundamentally schizoid.

“Donner, in essence, has implanted a Freddy Krueger movie in the middle of a Spielbergian reverie. Radio Flyer lulls you — and then gooses you. It gets you to swoon over the lost innocence of childhood, and then has you rooting for the stepfather’s blood.

A child, of course, can’t truly escape a hellish home life, at least not through fantasy. Yet that’s what the movie comes close to saying. In the end, Bobby sits in his souped-up, jet-propelled Radio Flyer and really flies. Or does he? On some level, the scene appears to be a deeply ironic metaphor for his death.

“Yet the irony — the darkness — is missing. As staged, Bobby’s ‘victory’ is so literal, so bathed in free-floating Spielbergian wonder, that the movie seems to lose its mind. It’s as if the filmmakers were saying that being a battered child isn’t so bad, as long as you get to escape into a blockbuster dreamworld.

“Have American movies become so mired in escapism that even a tragedy like child abuse can now be trivialized in such a blatant, cornball way? I’d recommend you keep your kids far away from Radio Flyer — less because it depicts anything they couldn’t handle than because it works like an exploitation film, transforming real-world anxieties into slick hooks. The movie starts out by evoking the primal, disturbing emotions of familial discord; it ends up telling you to have a nice day.” 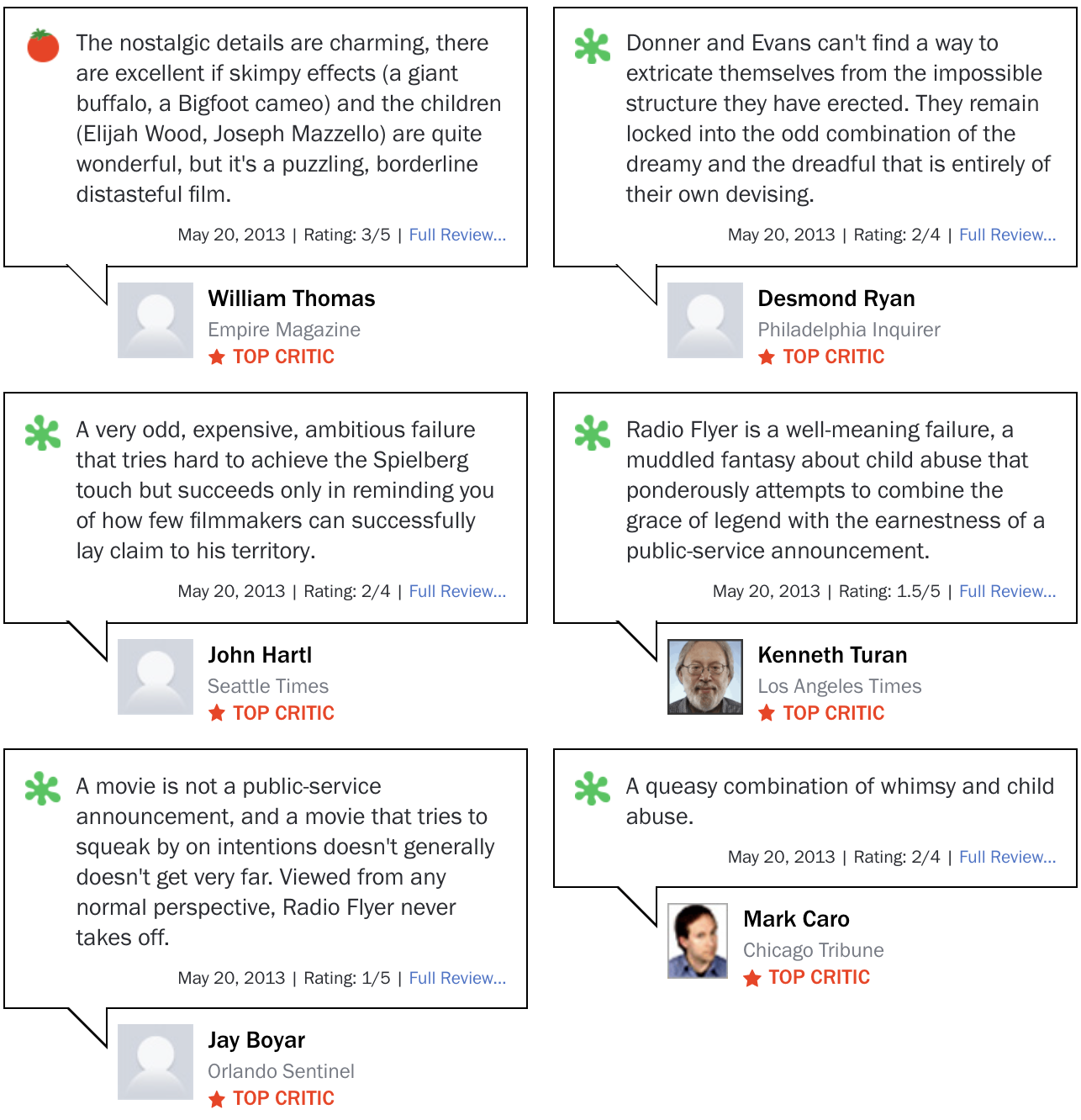