Prepare To Be Somewhat Let Down

You may or may not have read that David Chase and Alan Taylor‘s The Many Saints of Newark (Warner Bros./HBO Max, 10.1) is divided into two chapters and set four years apart.

The first half (maybe closer to 40% or 45%) happens in 1967, and is colored by (a) fraternal family stuff, (b) racial tensions, (c) Newark race riots, (d) sexual betrayal and (e) the absence of Michael Gandolfini. The young Tony Soprano is played in this portion by William Ludwig.

In fact, The Hollywood Reporter‘s David Rooney calls this section “the dominant storyline,” as in “more impressive than the second half.”

Michael, who resembles his late father, James, who headlined HBO’s legendary Sopranos series from ’99 through ’07, doesn’t turn up until the 1971 section, which is heralded, incidentally, by the Rolling Stones‘ “Sway.”

And in the view of Variety‘s Owen Gleiberman, the film’s final portion doesn’t persuade that Michael is on the path to becoming the reigning crime boss of northern New Jersey.

“The thing we most want from [Many Saints] is a sense of revelation. We want it to show us how Tony Soprano, growing up as a ‘normal’ Italian-American teenager, slipped onto the road that would lead him to become a gangster sociopath. We need to see him take that first step.

“The movie may have convinced itself that it shows it to you, but this Sopranos fan found Tony’s ‘evolution’ toward the dark side to be even less convincing than Anakin Skywalker’s transformation into Darth Vader at the climax of Revenge of the Sith.

“At the end, I felt like we needed a second prequel, or maybe just that essential TV thing: another episode.”

So let’s be honest — The Many Saints of Newark is only partly the return of Tony Soprano in the person of Michael Gandolfini (i.e., the second half), and it isn’t even quite that, in Owen’s opinion. 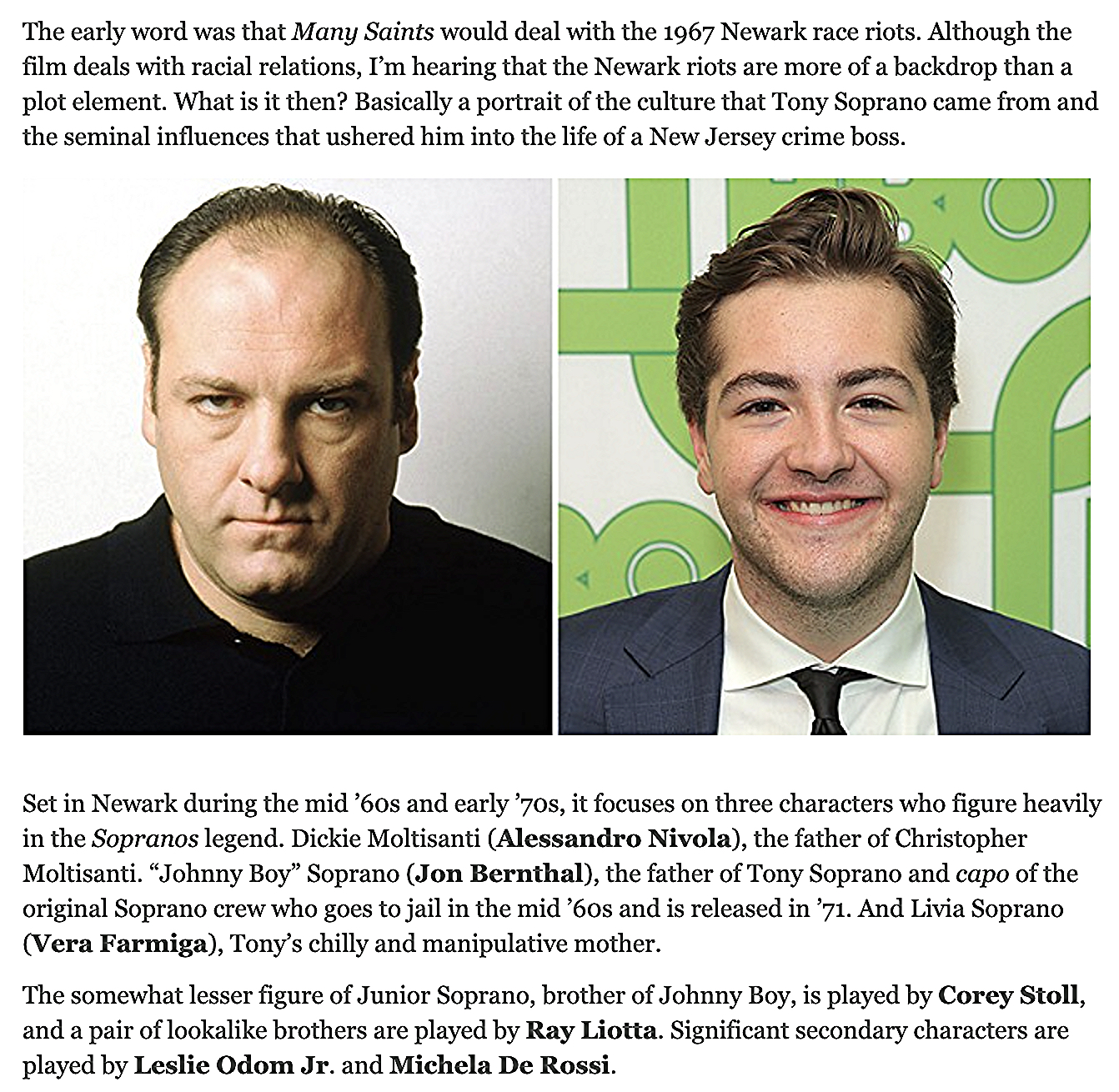 Michael Gandolfini obviously resembles his late father, James Gandolfini, but let’s not get carried away. Michael has his own (smaller) nose, doesn’t have his father’s toothy smile and he speaks in an amiable, mild-mannered way that doesn’t seem to suggest great volcanic currents within. Most significantly, he doesn’t have his dad’s deep-register voice. And he’s 22 now, so his voice isn’t likely to change. I haven’t yet seen The Many Saints of Newark (Warner Bros./HBO Max, 10.1) so let’s hold off on further observations. Any way you slice it Michael has his own life to live.