Wokesters are not letting the Dave Chappelle-Ted Sarandos–Closer thing go. They’re all piling on, the whole Film Twitter mob. All trying to get Netflix to pull The Closer and censor Chappelle, etc. Truly odious bastards. It’s so disgusting that this is the modern-day left. This is why I self-identify as a sensible left-center contrarian.

Then again a whole lot of people are watching the show, I’m presuming.

HE to Sarandos: You are the good guy, the freedom guy, the truth guy, the integrity guy…you are doing the right thing, and God adores you for it. Can anyone imagine Dave Chappelle calling for Hannah Gadsby to be flogged or excommunicated? The Closer cuts right through the woke smoke. It doesn’t deliver final, ultimate truth, but it’s honest, perceptive, fair and straight-up. And it’s certainly Chappelle’s truth. And you’re right to defend it, Ted. In the twinkling of an eye, you’ve become a man among men. 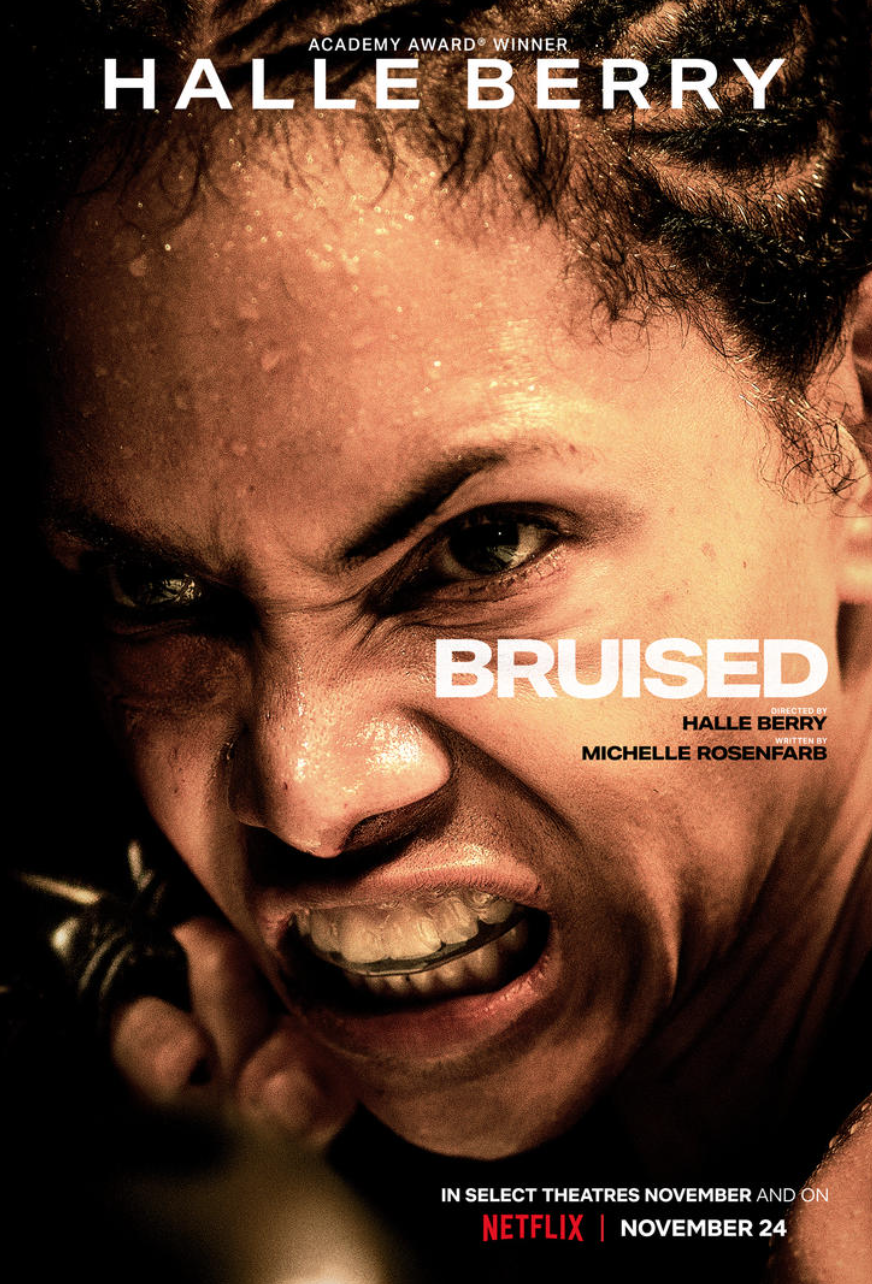 The House select committee investigating the Jan. 6 attack on the Capitol announced today that it will move to hold Steve Bannon in criminal contempt for not complying with its subpoena. And yet the committee “has opted to give other former Trump officials more time to comply with its subpoenas”, according to the Washington Post‘s Jacqueline Alemany and Tom Hamburger.

Why exactly is the committee going easy on the others? What’s the strategy?

Excerpt: “Lawmakers who sit on the panel — seven Democrats, two Republicans, all appointed by House Speaker Nancy Pelosi (D-Calif.) — said they are prepared to move quickly to pursue criminal contempt charges against witnesses like Bannon.”

And yet after a committee approves a contempt charge (presumably sometime next week), “the House must then vote on the matter. Once passed, the contempt referral would then be sent to the Justice Department. Then Attorney General Merrick Garland will have to decide whether to criminally prosecute an individual for failing to comply with the congressional subpoena,” etc.

Hollywood Elsewhere hates people who whoop…seriously. One “whoo-hoo yeahhh!” and you’re dismissed for life. William Shatner‘s asshat co-travellers were given a unique opportunity to reflect and meditate and merge with a Godhead consciousness afforded only to space travellers, and they reacted like idiots riding Superman: Escape from Krypton at Six Flags Magic Mountain. 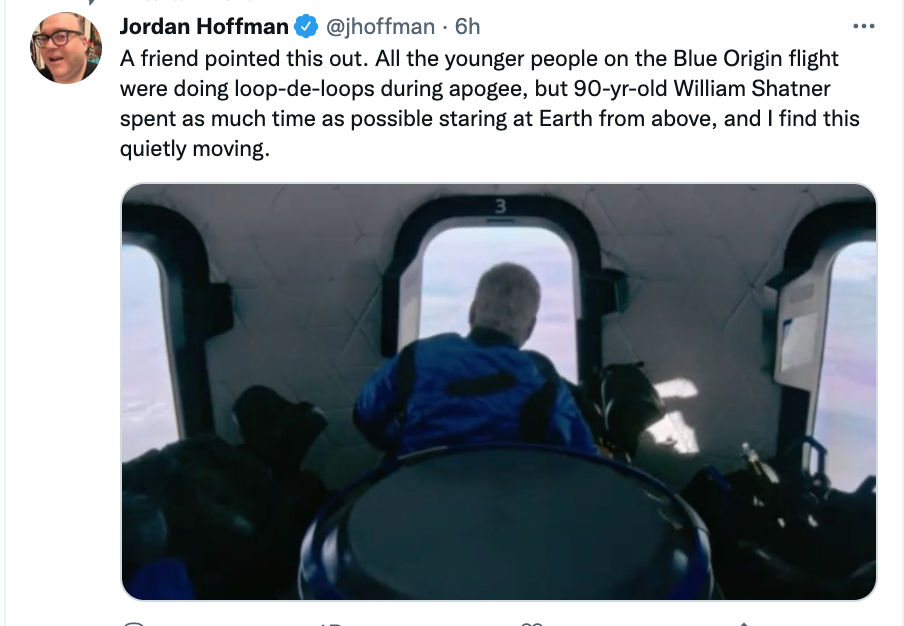 Yesterday Mark Harris tweeted a few statements about the Dave Chappelle trans thing, and his belief that this dust-up is “an important pivot point — not a pivot point about, as his defenders would have it, censorship or cancel culture or whatever false threat they’re imagining is central.”

Here’s the passage that got my attention: “But it doesn’t stop until a lot of people say ‘We’re sick of this, and that is what’s happening now. And all the angry response that we’re hearing is the whine of bullies having a weapon taken away from them. And all you can do is let them cry until they’re all cried out.”

Precisely! Except Harris has it ass-backwards. The people saying “we’re sick of this” are the normal, free-thinking, laid-back folks like Chappelle and Ted Sarandos and myself and Sasha Stone and the vast majority of Average Joes who loved watching The Closer, and the “bullies” are the Twitter shriekers…they’re crying and freaking out because they can sense their zeitgeist moment slipping away from them.

In other words: They’ve overplayed their hand and driven everyone crazy, and the normals are starting to wake up and say “nobody wants anything but love and agency and options for trans people but at the same time fuck the shriekers…they’re driving everyone nuts and we’re tired of attempts to destroy people over having the wrong opinions or standing with J.K. Rowling or whatever….we’re really fucking sick of mob Twitter justice.”

From Andrew Sullivan‘s 10.8 “Weekly Dish” column, “Dave Chappelle Is Right, Isn’t He?“: “Chappelle’s final Netflix special, The Closer, is a classic. Far from being outdated, it’s slightly ahead of its time, as the pushback against wokeness gains traction. It is extremely funny, a bit meta, monumentally mischievous, and I sat with another homo through the whole thing, stoned, laughing our asses off — especially when he made fun of us.

“The way the elite media portrays us, you’d think every member of the BLT community is so fragile we cannot laugh at ourselves. It doesn’t occur to them that, for many of us, Chappelle is a breath of honest air, doing what every comic should do: take aim at every suffocating piety of the powers that be — including the increasingly weird 2SLGBTQQIA+ mafia — and detonating them all.” 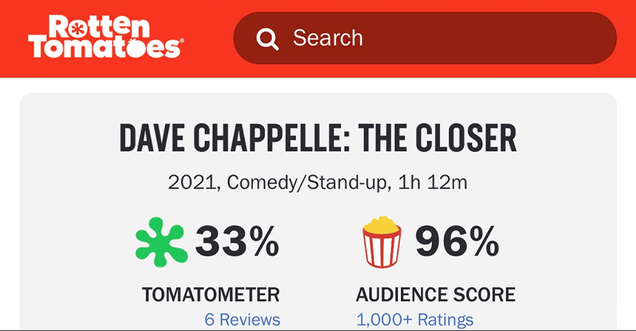 All American-made, bucks-up historical films try to soothe audiences with the usual upscale flourishes. In the case of The Last Duel the viewer is simultaneously living in medieval France and 21st Century America. The characters have to look as well-tended as the people we see in expensive clothing stores. Everyone is wearing perfectly tailored clothing, fresh from the cleaners, and they smell like nice cologne.

Hygiene standards in 1386 were almost certainly appalling by our standards, but we’re allowed to presume…okay, imagine that everyone slips into a hot bath each morning and uses a moisturizer and long-lasting anti-perspirant. This goes along with the great-looking garments and tunics, suede boots, expensive armor and high-style coifs (especially Ben Affleck‘s perfectly cut, canary-yellow hair). Jodie Comer‘s servants dressing and grooming her just so…very Maid Marian, very Kardashian.

And we all agree, of course, to not think about anyone answering the call of nature…get shut of it, shut it out, good God.

The only things that bother me (and I’ve mentioned these before) are the muted grayish-blue color scheme and Matt Damon‘s mullet. You know that Ridley Scott chose that mullet deliberately; he loved knowing it would rub people like me the wrong way.

The Rolling Stones have retired “Brown Sugar” from their stage show. An oft-performed track from their classic, half-century-old Sticky Fingers album, it’s a raunchy stomper about the sexual savoring of women of color. The lyrics use wicked images of 19th Century slave trade minglings as a fetid atmospheric element — the same hothouse that produced Richard Fleischer’s Mandingo (‘75).

Mick Jagger and Keith Richard have implied that the song’s excommunication may be temporary, and that it may return when the cultural mood shifts back into a semblance of sanity. Have they been talking to Ted Sarandos?