A week ago I read a N.Y. Times story about Bright Sheng, a celebrated University of Michigan music professor, being savagely attacked by campus wokesters for showing a lack of sensitivity blah blah.

Basically Sheng was forced to grovel and apologize and finally withdraw from teaching a high-profile class because he was dumb enough to show the students Laurence Olivier‘s Othello (’65), which in today’s universe is an obscenity because Olivier plays the title role.

Seriously — could Sheng bave been any more blind to the times and socially tone-deaf? Black actors can play this or that historically white character but whites can’t play blacks — not now and never again. How could Shern have not known that?

To wokesters there’s no difference between Olivier playing Othello in ‘65 (or, for that matter, the Muslim “Mahdi” in Basil Dearden’s 1966 Khartoum opposite Charlton Heston) and the worst minstrel shows. It’s all the same offense — the arrogance and temerity of a white person playing a non-white person. 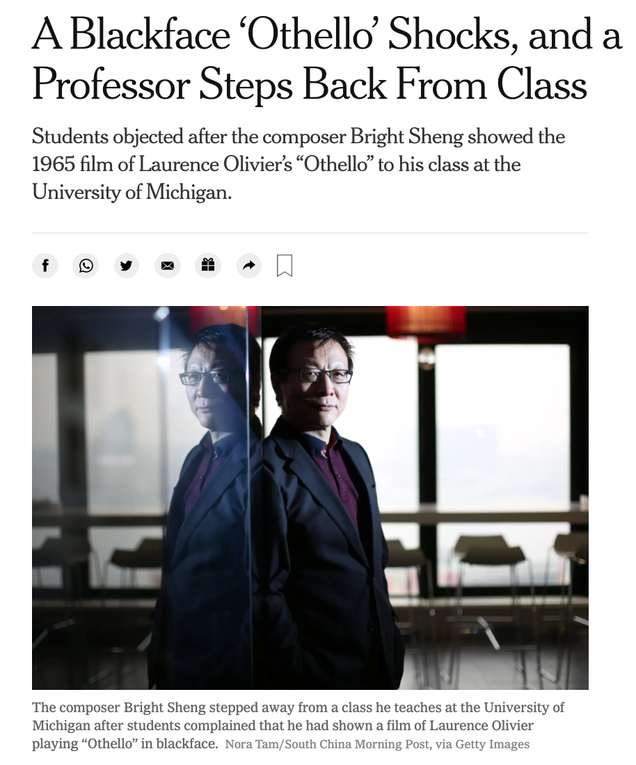 The fact that Olivier’s Othello is quite the tempest and suitably tragic (as was Orson Welles in his 1951 version) is, to woke lunatics, immaterial.

Would a white actor even flirt with the idea of playing Othello today? Of course not. But Denzel Washington can play a medieval Scottish social climber who was done in by his own (and his white wife’s) ruthless ambition. Actors of color can play anyone or anything they damn well please, but white actors have to respect ethnic boundaries or else. It’s simply the way it is now.

Shouldn’t there be respect for historical context and the social climate in which the Olivier and Welles versions were made? Answer: No way, Jose.

Great acting is great acting whatever the guise…right? Answer: Not in today’s climate.

By this same token Marlon Brando’s Emiliano Zapata performance in Viva Zapata! (‘52) also needs to be cancelled and forgotten. No less a personage than Guillermo del Toro once told me that he holds Elia Kazan’s 1952 drama in very low regard. “How would you feel about a Mexican-made film about Abraham Lincoln?”, he said. “And one that you might instantly recognize, as an Anglo American, as inauthentic and therefore disrespectful?”

I’m sure that University of Michigan wokesters would REALLY lose it if they were shown Black Like Me (‘64), a kind of African American or minstrel show-like version of Gentleman’s Agreement. It starred James Whitmore as a white guy who pretends to be black by coloring his skin. Remember that one? And it was made by good-guy liberals.