“You want me to drop the weapon?” the pudgy guy asked, mocking the mania. “Yes,” came the reply, “and then leave.”

I also love how a short anti-Chappelle demonstrator with a tennis-ball haircut attempted to push against the pudgy guy by holding his/her arms up, getting right into his 18 inches of private space. There was also a small woman with a shrieky, agitated voice shaking some kind of noisemaker at the pudgy guy. Talk about impolite, rude and disrespectful.

The pudgy guy nonetheless held onto a joshing, light-hearted attitude.

🚨#BREAKING: Dozens of Netflix employees and their supporters staged a walkout outside Netflix Headquarters

To protest the transphobic comments made by Dave Chappelle in his latest comedy special released earlier this month by the streaming giant pic.twitter.com/zkNnSDaE95

Official Focus Features description: “Written and directed by Academy Award® nominee Kenneth Branagh, Belfast (11.12.21) is a poignant story of love, laughter and loss in one boy’s childhood, amid the music and social tumult of the late 1960s.”

Herewith an acknowledgement of the 11.13 AFI Fest screening of David Fincher and David Prior‘s Voir.

One of the “visual essays about the love of cinema” is titled “Summer of the Shark” — a Jaws recollection by none other than HE’s own Sasha Stone. The essay is nicely narrated by the Awards Daily owner, and it tells about her cinematic awakening, if you will, when she first saw Steven Spielberg’s 1975 classic.

The photo is of a movie-set recreation of teenaged Sasha watching Jaws in her 1970s living room.

The other essays are “Ethics of Revenge” by Taylor Ramos and Tony Zhou, and “But I Don’t Like Him” by Drew McWeeny.

The entire thing will be shown on Netflix a few weeks hence. The trailer will also eventually pop through. 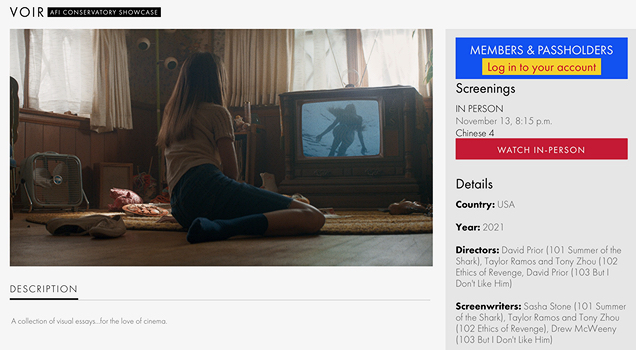 Based Elena Ferrante‘s same-titled novel, The Lost Daughter (Netflix, 12.17) is the directorial debut of Maggie Gyllenhaal.

Olivia Colman is Leda, a middle-aged professor vacationing in Greece for a week or two. Her obsession with Nina (Dakota Johnson) and her daughter causes Leda to reminisce about her own motherhood trials as a conflicted 20something.

“Plus the heartbreaking dialogue in Gyllenhaal’s adapted screenplay isn’t helped by the close-up shots that border on pretentious and the drawn-out narrative that prolongs the suffering of its key characters.

“Overall The Lost Daughter is an ambitious directorial debut. Colman shines as Leda but its overlong runtime and uneven supporting performances cause its dramatic effect to falter for the sake of style.”

I could and should have seen The Lost Daughter during Telluride, but I couldn’t fit it in.

“Scrub Your Ass With Sand”
Update: I'll say this much -- the coolest hombre in Dune is Jason Momoa's "Duncan Idaho, the swordmaster of House." Moma is beardless here, and so he looks a bit heavyish -- as if Joe Don Baker had succumbed to a cheeseburgers and beer and pasta diet after the success of Walking Tall. But Duncan has that macho mojo Han Solo thing going on. They should have ignored the Herbert narrative and kept him alive. Born in '79, Momoa is no spring chicken but he's got what audiences want. Login with Patreon to view this post
October 20, 2021 1:28 pmby Jeffrey Wells
6 Comments
Brian Laundrie Sleeps With Gators?
October 20, 2021 11:50 amby Jeffrey Wells

If it was my call and I had absolute power (and I’m not exaggerating for exaggeration’s sake), I would put Donald Trump‘s fat, half-naked ass into a Roman Colisseum-like arena and make him face three ferocious tigers, just like Russell Crowe in Gladiator and Victor Mature in Demetrius and the Gladiators. Yes, I would allow Trump to defend himself with a short sword, but you know he’d die anyway.

It goes without saying that Steve Bannon should suffer the same fate.

I’m not kidding — these guys are sociopaths, animals…hellbent on anti-Democratic revolt and sparking anti-Democratic insanity among the rural bumblefucks. They’re truly insane, and the crimes they’re guilty of deserve the ultimate penalty. A firing squad would afford them too much dignity. They need to face what Christians faced under the rule of ancient Romans.

Alternate scenario: Trump is murdered — stabbed to death — by the Praetorian guard, and in a mimicking of John Hurt‘s death scene in I, Claudius, he weeps and wails as the knives plunge in and out.