Support on Patreon Follow @wellshwood
No Comments
Any Stellar Film Years Since ’07?

I listed 25 2007 films of serious merit — American Gangster, Before The Devil Knows You’re Dead, No Country for Old Men, Once, Superbad, Michael Clayton, There Will Be Blood, Things We Lost in the Fire, Zodiac, The Assassination of Jesse James by the Coward Robert Ford, Atonement, 4 Months, 3 Weeks, 2 Days, I’m Not There, Sicko, Eastern Promises, The Bourne Ultimatum, Control, The Orphanage, 28 Weeks Later, In The Valley of Elah, Ratatouille, Charlie Wilson’s War, The Darjeeling Limited, Knocked Up and Sweeney Todd. Just as strong as ’99, and perhaps even a touch better.

The idea in re-posting this is to note that 15 years have elapsed since ’07, and to ask if anyone feels that any of these annums have measured up to ’07 or any of the previous banner years.

I happen to believe that everything started to go badly the following year — 2008 — with the debut of Iron Man and the subsequent increasing power of the superhero genre (DC Extended Universe, Marvel Cinematic Universe), and that “my” kind of movies haven’t been the same since. Strong, distinctive films have broken through every year, of course, but the pickings have been getting slimmer and slimmer since ’08, and especially since the Robespierre thought plague began to poison the water in ’17.

Is Hideo Nishijima‘s Drive My Car now currently positioned as the likely favorite to win the Best Int’l Feature Oscar? Probably. Okay, maybe not. Snooty critics carry only so much cred. I’m an Asghar Farhadi man myself.

77 Comments
When The Music Stopped

Herewith a tough but fair assessment from Variety’s Owen Gleiberman about why West Side Story (and it breaks my heart to say this) appears to be a flopperoo, at least as far as viewing appetites outside your X-factor Millennial, older GenX and boomer demos are concerned.

Not technique- or chops-wise but vision-wise in terms of reading the cultural zeitgeist, Gleiberman is saying that Spielberg’s instincts are perhaps no longer in synch with things, at least not in a razor–sharp way and certainly not like they were between Duel and Schindler’s List/Jurassic Park. He’s gotten older. It happens.

Spotty Acquaintance With Greatness
[Posted on 6.27.06 -- 15 and 1/2 years ago] "'Is it possible to be a great star without appearing in very many great movies?,' asks N.Y. Times DVD guy David Kehr in a brief riff on Clark Gable, before getting into the subject of Warner Home Video's new Gable box set.

Arrogant assumptions + klutzy presumptions that it wouldn’t all come out in the wash don’t translate into “disgrace” for ex-CNN anchor Chris Cuomo. He’s not a panting sexual animal, and isn’t in the same league with brother & ex-governor Andrew at all. It was rash and sloppy for the SNL team to slander him with the “d” word.

By the way, with Chris Wallace resigning from Fox is it feasible for the Trump-loathing Chris to fill his slot? Probably not, I would imagine. 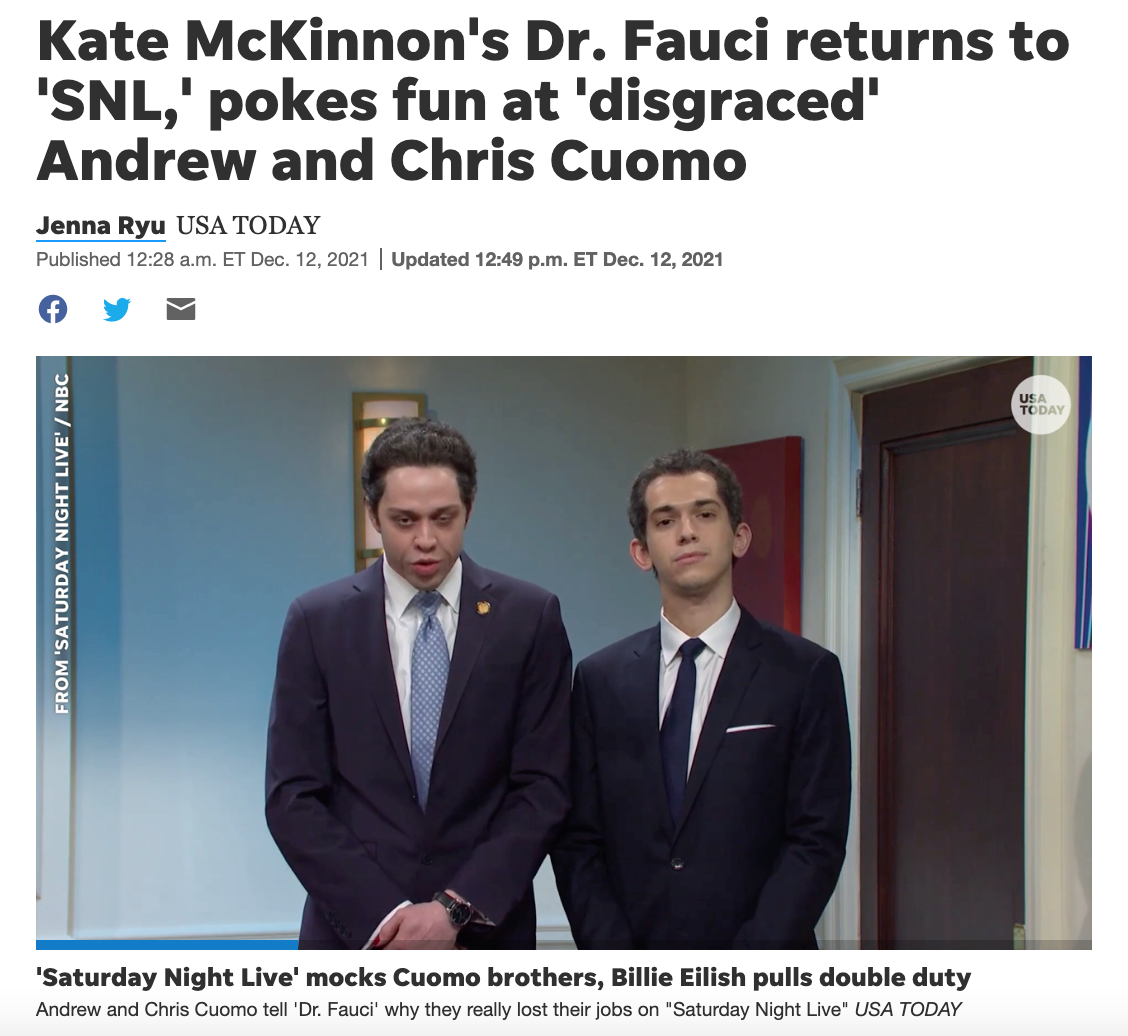 Initial first-weekend projections had it earning as much as $25 million; that figure dropped to the low teens after the first day of release yielded a lousy $5 million. The final opening weekend tally was $11.5 million. Shrieks of shock and disbelief echoed ’round the twitterverse…”what the eff happened?” In The Heights needed $200 million worldwide to break even, but ended up with $43.9 million…wipe-out.

It was generally surmised that Steven Spielberg‘s West Side Story would do better — ecstatic reviews, greater brand recognition, great songs, adored by older demos, respected by upmarket X-factor Millennials. Especially given that it opened without a competing day-and-date streaming option (which In The Heights had). Plus Jett and Cait wanted to see it this weekend at their local West Orange plex and every after-dinner weekend show was sold out — they had to settle for Monday evening.

As recently as yesterday morning it was projected by CNN Business’s Frank Pallotta to earn “roughly” $15 million. But WSS only managed a paltry $4.1 million on Friday (including Thursday previews) and will probably end up with a fizzly $10.5 million by tonight — over a million less than In The Heights. 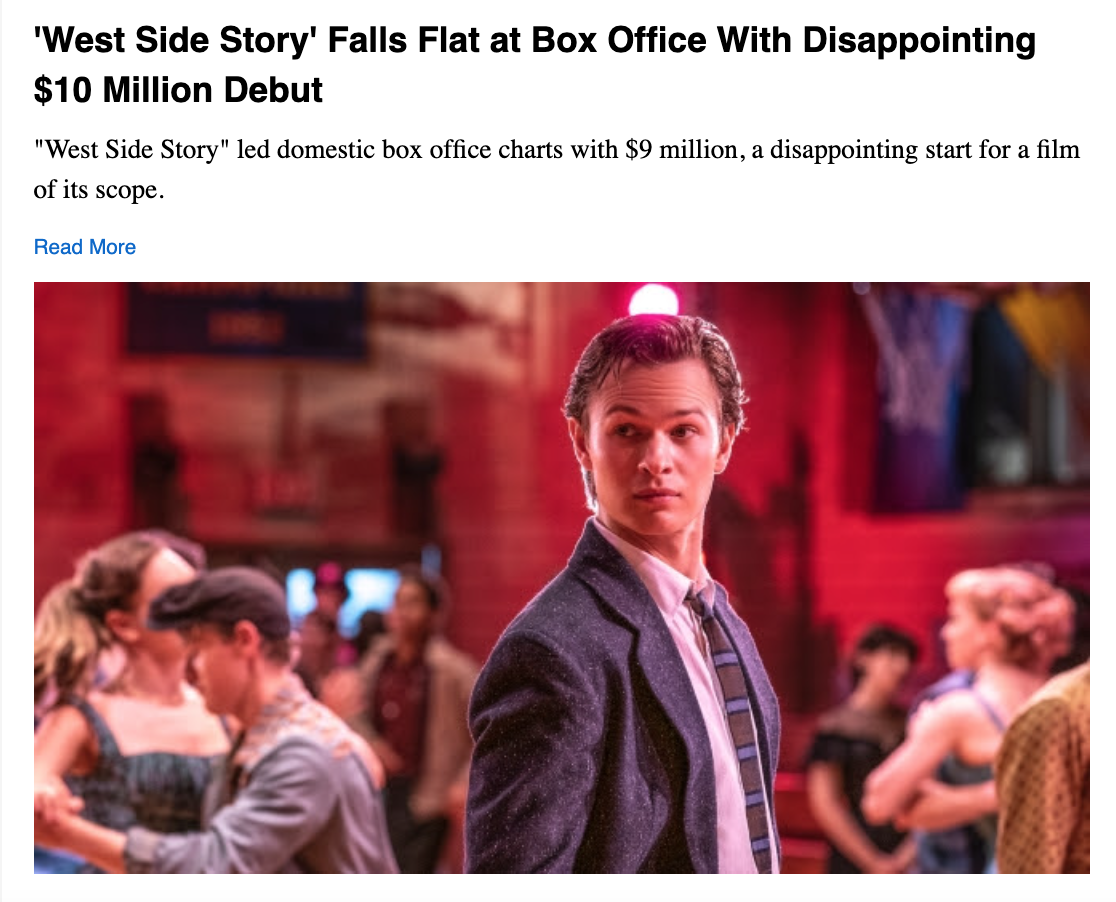 This basically translates into a big nope.

Deadline‘s Anthony D’Allessandro: “[While] the end game for West Side Story is a marathon [and] not a sprint, the mainstream box-office media [can now] feasibly write that a Spielberg film with a $100 million-plus production cost” — rumored to be as high as $130 million, and that’s without prints and ads — “is a bomb.”

Thanks, Millennials who fucking ignored this exceptionally well made and emotionally affecting film and yet intend to storm theatres next weekend for Spider-Man: No Way Home…thanks, Zoomers…and thanks older people (especially older women) who were too busy or too Covid-concerned to show up. You joined your various lethargies and worked together to help kill the theatrical aura (but hopefully not the long-term potential) of one of the finest and most alive-on the-planet-earth films of the year.

Yes, West Side Story is looking at a long game, but how do you work your way out of under-performing compared to In The Heights? Especially considering that West Side Story cost twice as much as Miranda’s film, and probably shouldered heftier p&a costs.

Jett (33 year old Millennial): “There was nothing about West Side Story that was new or immediate or star-driven or which felt like any kind of direct feed or boost from today’s culture. It’s not a streaming-age movie, and the here-and-now element is minimal. It’s basically a nostalgia show for older audiences, and not enough older viewers came out for it.”

No way around it — this was a shit-level opening for West Side Story. And if it finds no traction next weekend, what left will there be to say?

Nick “Action Man” Clement: “I find it interesting that anyone would have thought that this movie would have actually been a box-office hit. Nobody cares. This would have been the case pre-COVID, but mid-COVID? The movie was doomed from the start.

“I haven’t seen it yet — doubtful I’ll have the chance to see it on the big screen — but this spells the end of the studio-fortified adult drama-slash-big musical. If an ecstatically reviewed Beardo film can’t put butts in seats, what can?