Due respect and congratulations to the six women who earlier today were nominated for Best Actress by the Critics Choice Association — The Eyes of Tammy Faye‘s Jessica Chastain, The Lost Daughter‘s Olivia Colman, House of Gucci‘s Lady Gaga, Licorice Pizza‘s Alana Haim, Being The Ricardo‘s Nicole Kidman and Spencer‘s Kristen Stewart.

Five of the above were also nominated for the Golden Globe Best Actress award (i.e., Alana Haim didn’t make the cut).

The CCA nominated Haim for having tapped into something genuine and grounded and non-actressy, but CCA voters can’t tell me with a straight face that Haim gave a more affecting and relatable performance than Cruz did. C’mon…

All of the above connected (Gaga especially with paying audiences), but HE and the Movie Godz are again declaring that elbowing aside Penelope Cruz‘s just-right turn in Pedro Almodovar‘s Parallel Mothers was a wrongo — it really was. There’s no question in my mind that Cruz gave the year’s finest female lead performance — none whatsoever.

Based on a 1957 Patricia Highsmith novel, Deep Water was pulled last week from a Disney theatrical release (previously slated for 1.14.22), probably because it isn’t good enough and/or is regarded by Disney execs as a guaranteed money loser.

Disney has had a rough experience with almost every inherited 20th Century Fox release. The Last Duel disappointed ($100 million cost, $30,2 million domestic), and then West Side Story flopped, and now this.

Poor Adrian Lyne — this would have been his first film to hit theatres since ’02’s Unfaithful. 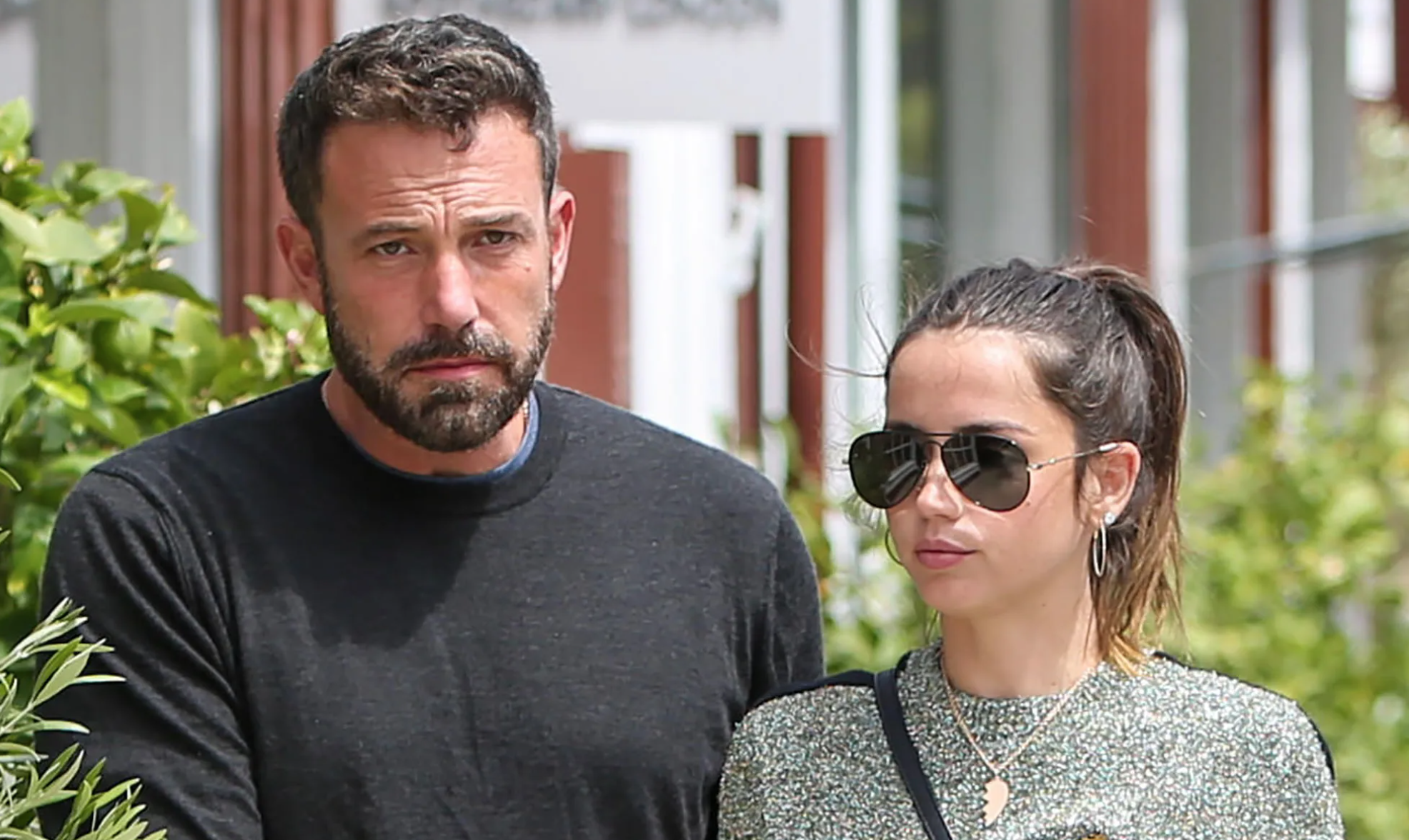 Nancy Reagan was the toughest, closest and most trusted adviser of her husband, Ronald Reagan, during his California governorship and U.S. Presidency. I never had any strong opinions about her one way or the other. I didn’t dislike her as much as I didn’t care. Except, of course, when she launched her infamous “Just Say No” anti-drug campaign in 1986, which nearly everyone regarded as an embarassment.

But my heart went out to her one day in the summer of 2013. It happened inside Alex Roldan hair salon, which is on the first floor of the London hotel in West Hollywood. She was driven from her Bel Air home to the salon every two or three weeks, my hair guy told me, but at age 92 she was obviously frail and her legs were apparently gone. I recognized the syndrome as my mother, who passed in 2015, was going through similar woes at the time.

Two people — a personal assistant and a hair salon employee — were trying to help Mrs. Reagan move from a shampoo chair into her wheelchair, and it was taking forever. I was about ten feet away and was on the verge of offering to help. It wasn’t my place, of course, so I just stood there and watched. The poor woman. Old age offers very little dignity, and no mercy at all.

Not only did the “owner of the car forgot to set the parking brake,” he/she also forgot to put the car in park or at least leave it in gear.

Whoa! Watertown Police say an unoccupied car rolled down a hill around 11 a.m. and jumped the curb landing on Main St by Echo Lake Rd. No injuries. There were no cars passing by either. The owner of the car forgot to set the parking brake & was issued an infraction. pic.twitter.com/i3McjGxd7I

I woke up this morning to the Golden Globe and Critics Choice Award nominations, and quickly succumbed to the same mixture of lethargy and depression that everyone else is feeling.

Not so much about the Globes — will anyone care which films they’ll celebrate? will their picks influence anyone or anything in any way? — but the CCAs.

I was primarily upset when a friend predicted this morning that the box-office collapse of West Side Story had dented its award cred (“Nobody likes to vote for a loser”) and that the odds seem to favor a Best Picture win for Kenneth Branagh‘s Belfast. With the CCAs, I mean.

When I heard this I went “wait…what?”

West Side Story is still the same emotionally affecting, inventively shot and cut, extremely well-made film it was before last weekend’s box-office calamity. It really is the superior contender out there, certainly by my sights.

The Globes won’t have their traditional NBC telecast because of the angry industry boycott over a previous lack of black members, but their show, set for 1.22.22, will be streamed.

I am swallowed in lethargy…drowning in the stuff. I used to feel such excitement for this and that awards contender. I used to be a big rooting fan of awards season favorites. I would cheer and whoo-whoo! when my “team” won. I was in heaven when Green Book won Best Picture and all the would-be wokester assassins seethed and muttered “curses!” Their rage was my joy.

Now there’s…I was going to say “nothing” but what I mean is that there’s not very much. I’m not feeling anything right now. The West Side Story collapse knocked the wind out of me.

I’ll get into the actor nominations and likely winners later. I’m too depressed to sift through it all now.

Awards Daily‘s Sasha Stone:
“It’s so many things at once. It’s COVID, primarily. It’s the comfort and isolation and security people have found in their homes this past year, with no desire to leave. It’s inflation — that is going to impact how people spend their money on stuff like movies since it impacts their gas prices and their grocery bill. Finding that extra cash to go out and sit in a movie theater probably isn’t a major priority at the moment. Richard Rushfield has been tracking the demise for a while now, with stories like “Will Movies Survive?” And “The Disappearance of Hollywood as We Know It” and “The Twin Plagues of Moviedom’s Assisted Suicide.”

HE Honestly? I don’t care how on-the-money Rushfield is with his doom-and-gloom assessments about how theatrical is basically finished, or certainly for people like me. I’m getting really fucking sick of hearing how horrible everything is, and how doomed we all are, and how the animals are doing their share and then some to bring this about.

Back to Sasha: “We can be aware of what’s happening. We can watch what’s happening. But probably only something like the news of West Side Story’s dismal box-office could provide that moment of ‘oh wow, everything really has changed.’

“It breaks my heart. There is so much content being produced every day that is occupying the attention spans of people that might have previously gone to the movies. At least we know teenagers are still going to go to the movies — for something to do on a Saturday night, for a place to go where their helicopter parents won’t follow, a place to go to make out. Parents will also still take their kids to the movies. The movies that will continue to thrive will be animation, fantasy, horror and genre movies.” HE comment: “That’s so sickening! We are truly witnessing the downfall of the “good movies are usually supported by smart audiences” holiday aesthetic. We are spiralling into decline. The end of a way of life.

Sasha: “I was hoping West Side Story would be our deus ex machina. Looks like we’re going to need a bigger boat.”

I travelled for over 11 or 12 hours yesterday, leaving Jett’s home at 1:45 pm New Jersey time and not arriving back home in WeHo until after 10 pm Los Angeles time (1 am by Jett’s clock). I had a great seat with ample leg room, right next to the main exit door. But I also paid a certain price for being more visible to the stewardesses.

For the first time since the pandemic hit 21 months ago and after five or six LA-NY round-trip flights, I was constantly pestered about my mask behavior. Pestered, in fact, four or five times by a fickle, pain-in-the-ass stewardess for not keeping my mask above my nostrils.

We all know the rules, but I like to go mask–casual after sitting down in a plane, a restaurant, a bar or some other commercial enclosed space. We take our masks off once we’re seated in a restaurant, but in planes we keep them on. I for one like to let my mask droop a bit below the tip of the nose in order to avoid all that warm steam fogging up my glasses. 1/3 of an inch below my nostrils…big deal.

For this I was hassled relentlessly by a certain stewardess. This has never, ever happened to me before. Nearly two years of this shit and I’ve never had a single dispute with any steward or waiter or security guard or anyone else about mask-wearing. I might have dropped the mask three or four times while sipping a drink and munching pretzels and whatnot. I didn’t argue or get snippy or argumentative, but it was awful. I am not a rule-breaker in this regard. I have always followed correct Covid protocols. Life is too short not to.

As a general rule of the future I think I’ll be avoiding United if at all possible. A very unpleasant flight in this regard.