10:45 pm: My fears and premonitions about Jon Watts, Chris McKenna and Erik Sommers‘ Spider-Man: No Way Home were unfounded.. I’m not saying that a big chunk of it, particularly during the first 60 to 65 minutes, didn’t numb me out and at times bore me to death. I looked at my watch at 9:15 pm and went “oh, God, another whole hour to go!” But a tiny bit later everything started to change and advance and coagulate, and the trippier, hall-of-mirrors aspects of the “multiverse” plot started to kick in, and the movie got quieter and more reflective and then joyful…the crowd broke out in cheers three times…and I was suddenly going “holy shit, this is really working!”

Ridiculous as this may sound, it is HE’s conviction that McKenna and Sommers’ SM:NWH script has resulted in one of the most cosmically out-there meta-Marvel experiences ever, not to mention one of the most emotional Marvel sink-ins (and that includes Avengers: Endgame).

As much as I hate to admit this, Spider-Man: No Way Home — despite all the flash-bang-jizz-whizz-whomp-thromp crap that occupies much of the first 60 to 65 minutes, which I hated — is easily one of 2021’s best films. It actually should be nominated for Best Picture because it turns the proverbial magic key — it turns audiences on. I was there and I felt it, dammit. This is what people go to the movies for. It even ends a little bit like Warren Beatty‘s Heaven Can Wait…almost. At the finish everyone applauded.

Yes, the early sections are an unfortunate lesson in FX chaos action editing, and at times the film felt like a fan-service mechanism, a machine, a greatest hits service tray. But the last 45 to 50 minutes are really good. I was totally sold. Call me flabbergasted. 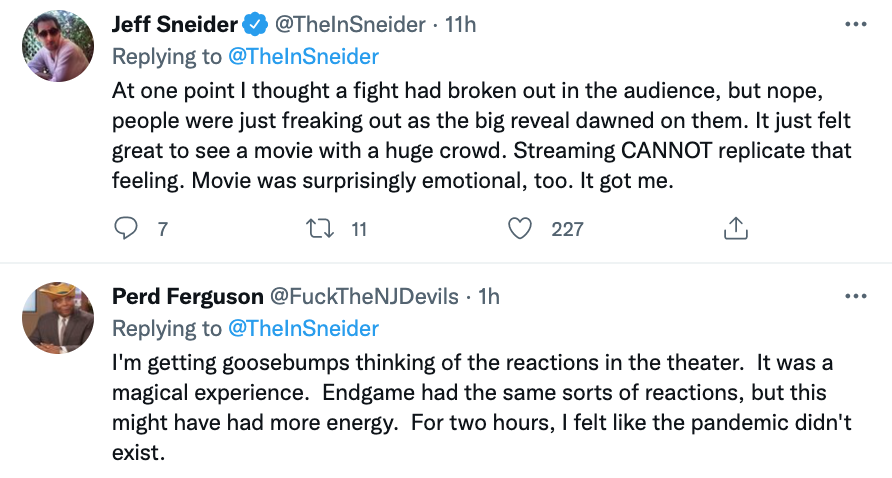 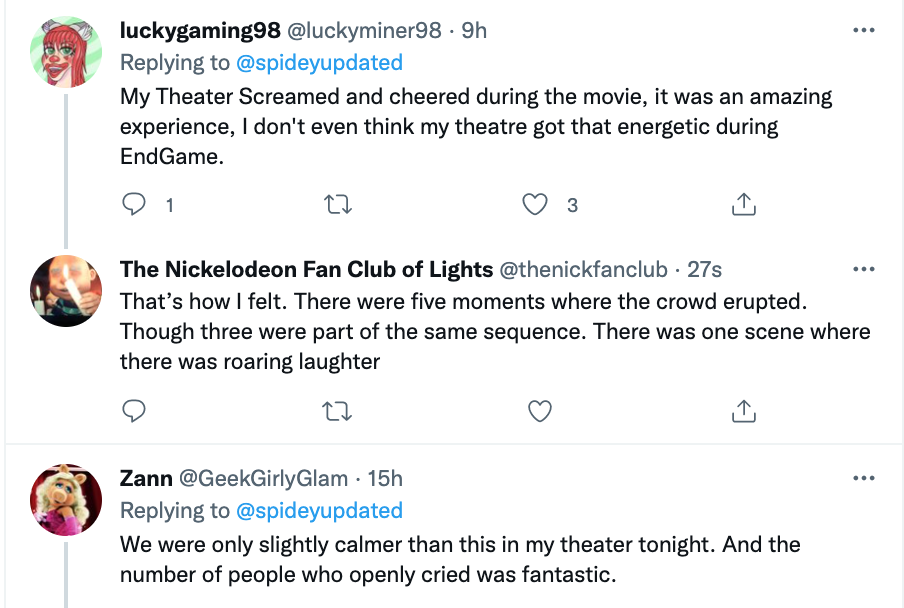 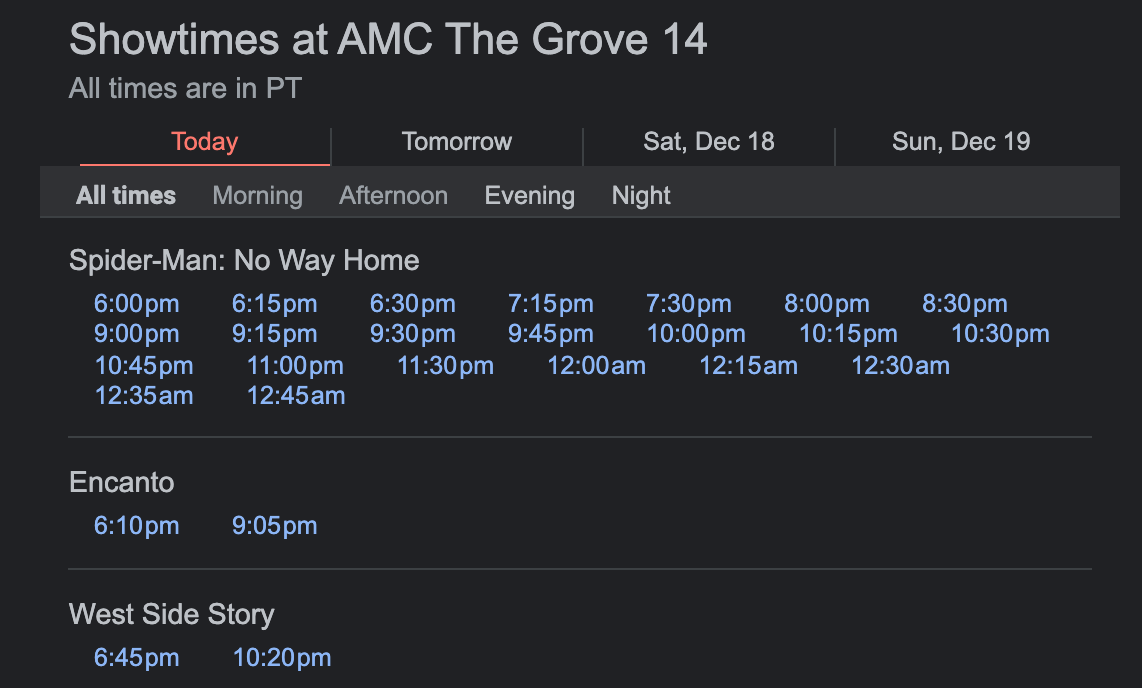 ..to the teaser for Ben Stiller and Dan Erickson‘s Severance (Apple TV+, 2.18.22) is something along the lines of “this is obviously a dry and intelligent limited series, and I’m there.” Getting a bit of a Downsizing meets 1984 meets THX-1138 vibe…who wouldn’t? About a mass man (Adam Scott) willfully submitting to corporate-think — “a group of office employees who have agreed to have their memories severed through an experimental medical brain procedure that will permanently separate their work and personal lives.,” etc.

Has Brad Pitt Lost His Mind?
Why would Brad Pitt degrade his brand by costarring in a obviously ham-fisted, aimed-at-blithering-idiots, piece-of-shit adventure comedy like The Lost City (Paramount, 3.25)? It's been 37 years since Romancing The Stone and nobody will give a shit anyway, but that's more or less the template. (Or, if you will, Romancing The Stone meets a slightly less bullshit-stuffed Jungle Cruise.) Kathleen Turner played a reclusive romance novelist back then and Sandra Bullock is playing a romance novelist now. Channing Tatum is the new Michael Douglas, a brawny hero with feet of clay. Beware of directors Adam and Aaron Nee. Login with Patreon to view this post
December 16, 2021 3:05 pmby Jeffrey Wells
63 Comments
HE to Barack Obama

Mr. President — Ever since you began posting your best-movies-of-the-year lists (when was that, late ’16 or early ’17?), Hollywood wags have doubted that they represented your own personal tastes. The assumption was that younger folks on your staff chose the right “tasteful” films and you signed off on them. I, for one, have always (naively?) trusted that your lists represented your own actual preferences, so I’m going to address my comments directly to you, the 44th president of the United States. Here they are…

(1) I’m going to assume you haven’t seen Pedro Almodovar‘s Parallel Mothers. Because if you had, there’s no way you would have omitted it in favor of Old Henry (who’s even seen that film?) or Passing (c’mon…a 1920s Manhattan-Harlem drama, one that barely had a pulse, about a completely unbelievable interracial marriage…the film’s admirers pretended that Ruth Negga‘s facial features could have passed as European-descended, even to a toxic racist husband who was hyper-attuned to such matters) or Pig (a movie about great organic cooking for the ages vs. blandly catering to to the know-nothings). These are all passable or pretty good films, but Almodovar’s is masterful. Did you not see it or something?

(3) Did you honestly feel that Drive My Car needed three hours to make the points that it made? Did you think that the director’s wife had betrayed him just that one time (which is what N.Y. Times critic A.O. Scott thought) or did you come to realize that she had numerous other sexual partners as a way of coping with the death of their child?

(4) Hat tip to your including The Worst Person in the World and Quo Vadis, Aida — both triple-grade-A, European-made films.

(5) In The Power of the Dog, did you honestly understand what had happened to Benedict Cumberbatch‘s Phil Burbank during the final reel? Because I didn’t. I had to ask friends and research it before I realized what had happened. Director Jane Campion certainly didn’t make it plain to the dumb people in the audience. This, to me, is not the mark of a triple-A film.

(7) I thought you would have included the excellent King Richard on your list of 14, but it didn’t make the cut. Why not? It’s the only 2021 film that said “this is what it takes to make it in a difficult realm….only the devoted and highly disciplined succeed.” Plus it has a fascinating lead character, which is arguably Will Smith‘s best performance. You can’t tell me you saw King Richard and didn’t greatly admire it.

(8) In sum, no King Richard and no Parallel Mothers constitute, no offense, a pair of glaring WTFs. 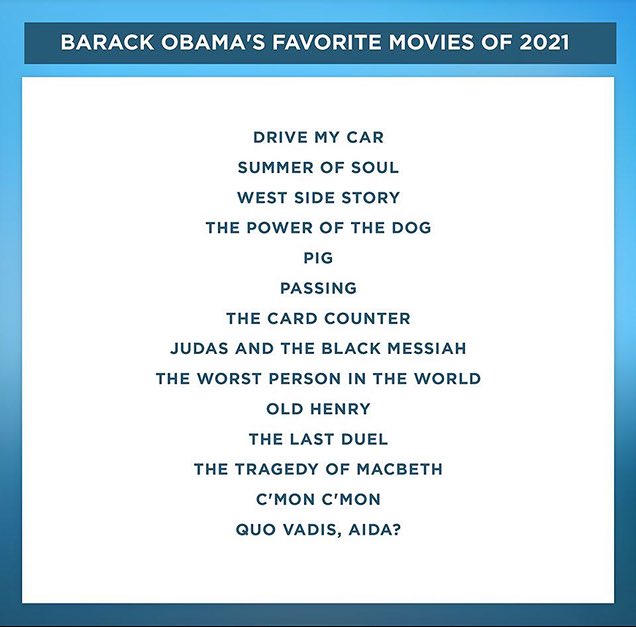 Not A Good Look But…
Last night Ben Affleck told Jimmy Kimmel that his reported remarks to Howard Stern about supposed links between his alcoholism and his waning marriage to Jennifer Garner, which sounded to a lot of people like "Jennifer made me an alcoholic," were taken out of context and turned into toxic click-bait by voracious online rewriters. Login with Patreon to view this post
December 16, 2021 10:50 amby Jeffrey Wells