If there’s no surrendering to a movie…if there’s no world to submit to and believe in…if there’s no belief in any “movie world” on the part of the filmmakers or the actors or the audience then what what the hell are we doing, man? Movies are always about slipping into a rabbit hole and swallowing the red pill and buying into whatever happens down below…the characters’ journey is our journey, and we’re all on it together. But if there’s no rabbit hole or journey or pill then why watch the damn thing?

If you’re willing to pay to sit through a film as smart and self-aware and cynically violent and relentlessly hollow as Matt Bettinelli-Olpin, Tyler Gillett and James Vanderbilt‘s Scream (Paramount, 1.14)…if all you care about is basically watching an “amusing” meta-satire of a slasher film that constantly steps back and assesses itself every couple of beats and says “okay, another time out so we can make fun of ourselves and our formulaic meta bullshit which isn’t as meta or bulshitty as it might seem at first because we’re acknowledging the meta bullshit each and every step of the way so guess what? You’re smart, you get it, and we get that you get it and you get that we get that you get it,” etc.

Just describing this narcotizing slasher satire is making me…okay, not exactly nauseous but certainly bored and listless all over again.

I saw Scream last night, and half the time I was daydreaming about how everything could be settled fairly quickly if David Arquette‘s “Dewey Riley” could somehow get hold of Tom Cruise‘s “Vincent,” the cartel assassin from Michael Mann‘s Collateral…let’s say Dewey somehow got hold of Vincent’s cell phone number 17 or 18 years ago and it’s still good, and he calls and Vincent picks up and Dewey says, “Vincent…whaddaya doin’? I need you, man…I need you to get your ass up to Woodsboro as soon as you can because fucking Ghostface is at it again, and you just need to step into this situation and drill this motherfucker in the chest three or four times…tight groups…and once more in the forehead for good measure. All he has is a knife, Vincent…he’s a sitting duck. Just take him out as a solid for me, bruh…waste his ass.”

I was with Vanderbilt and Guy Busick‘s script during the first few minutes…everyone will be. Ghostface calls the first victim, Jenna Ortega‘s “Tara Carpenter,” and before you know it they’re talking about horror films and Tara mentions that she’s a fan of elevated horror (The Babadook, It Follows, The Witch, Hereditary, Midsommar, The Lighthouse) and Ghostface says “isn’t that a little fancy-schmancy?” or words to that effect, and I was going “okay, I like this…the writers are acknowledging that Scream isn’t elevated but at the same time they’re honest enough to admit that there is a higher level of horror, so this is cool.”

But the meta thing quickly stops working, and by the half-hour mark you feel completely trapped.

There are two or three references to the fictional slasher movies called Stab (stands-ins for Scream), and you know what I was thinking of? A 1982 Meryl Streep-Roy Scheider movie that was originally called Stab before it was retitled as Stiil of the Night.

A friend sitting two or three rows behind to my right was going “aahh-hah-hah!” now and then…having a terrific old time. An hour or so later I emailed him and said, “I heard you laughing at that cold, cynical metaverse piece of shit. You’re too obliging, too generous. I liked it in the beginning but it very quickly begins to eat itself.”

Pally: “I thought it was LOL funny. Very much in the spirit of the franchise while winking at the whole thing. I had a good time.”

Pally; “Exactly. I had a great time.” 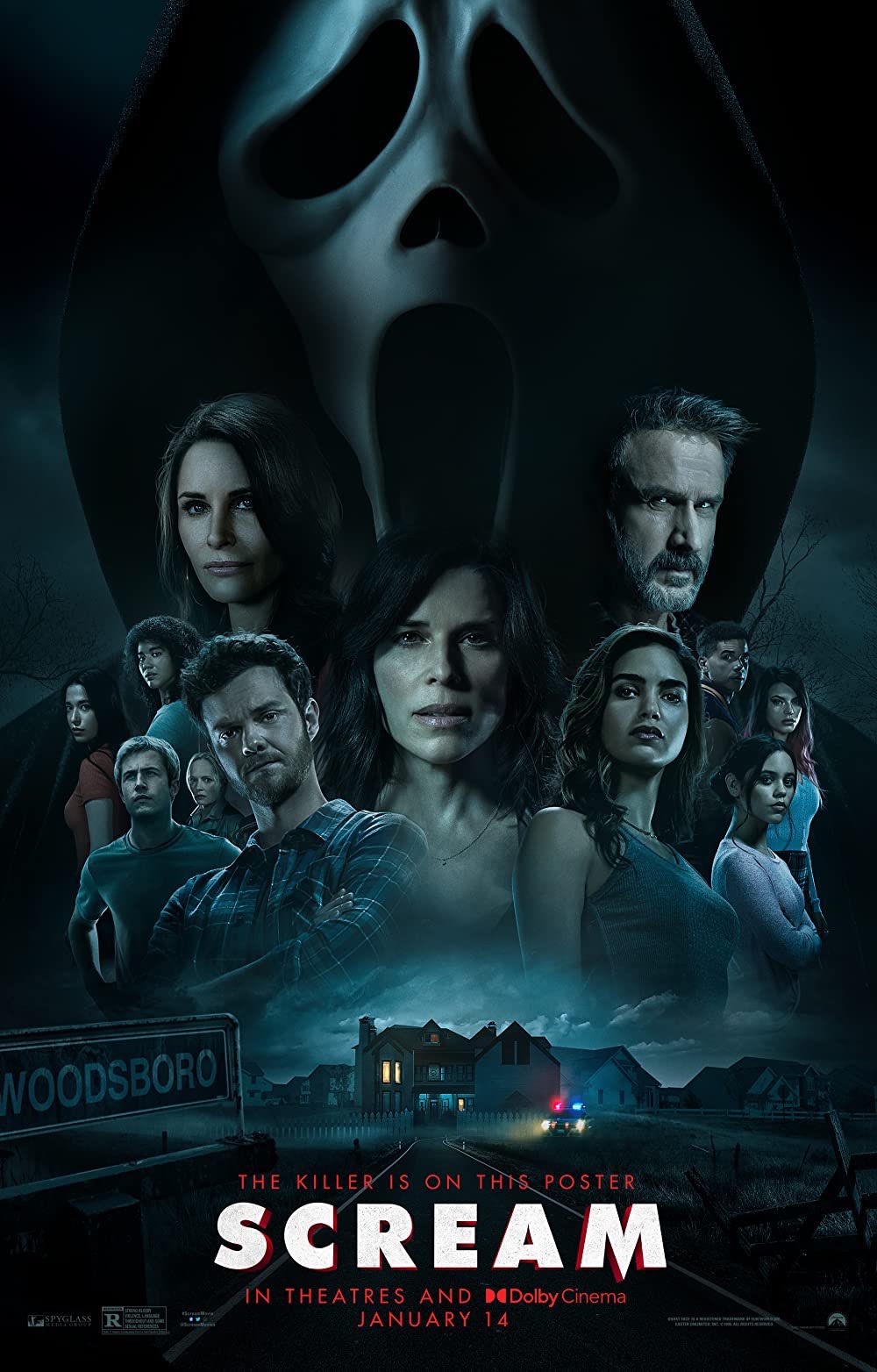 …by a depiction of a mother who has things on her mind (yes, selfish things) other than mothering. And so they’re voicing stern disapproval. I don’t adore The Lost Daughter, but I certainly respect the willingness of director Maggie Gyllenhaal to “go there” and pick at that scab.

No Comments
So Much Inside Me

Sutton has a lot of feeling and joy and excitement on her mind, and is trying to express it. But so far, the words have yet to formulate.

Cruz’s Double Snub
Not only was Penelope Cruz's Parallel Mothers performance ignored in the SAG nominations for Best Actress, but also by the BAFTA's longlist of Best Actress contenders.

Now that Kristen Stewart‘s Best Actress campaign is all but toast after being excluded from the 2022 SAG Award nominations, and since no one explored the whys and wherefores in this morning’s initial reaction thread (“That’s It For KStew“), I’m asking again: why was her Lady Diana snubbed?

HE theory #1: It wasn’t the quality of Stewart’s performance, but the psychotic dreamscape “Diary of a Mad Princess” vibe of Pablo Larrain‘s Spencer. I never argued that Stewart didn’t give her all — she obviously dove into Larrrain’s vision hook, line and sinker. But the movie was agony to sit through.

HE theory #2: Ever since SAG merged with AFTRA ten years ago, the annual nominations have adopted a downmarket character and, especially since ’16 or thereabouts, focused on representation as much as quality of performance. Stewart might have been edged out, I suspect, by votes for Respect‘s Jennifer Hudson — never a truly serious candidate due to the film’s mediocre reputation, but popular with the SAG-AFTRA rank and file.

HE theory #3: On 11.18.21, Variety‘s Clayton Davis posted a Stewart interview in which she said “I don’t give a shit” about winning an Oscar for Spencer. This might have been a factor.

No Comments
That’s It For KStew

I’m sorry…okay, not that sorry but the heavily-funded, once-seemingly-favored Best Actress campaign behind Kristen Stewart’s performance in Pablo Larrain’s Spencer collapsed this morning.

KStew was killed by SAG members who failed to nominate her, and at the same time nominated Respect’s Jennifer Hudson, probably due to identity politics as no one was predicting she’d be among the top five. She’s fine but the movie isn’t.

The SAG nominators, by the way, were completely clueless and dead wrong to ignore Parallel Mothers’ Penelope Cruz, who gave 2021’s best female lead performance — hands down, no debate.

Trans fanatics are already hating on this but that in itself tells you that Paul Schrader’s suggestion has struck a nerve. Seriously, no fooling around…this is a good idea. It’s not easy to make this sort of thing work, but if the right kind of Sydney Pollack-level hyphenate were to come along and assemble the elements just so, it could really connect with Joe & Jane Popcorn.

Last night HE’s “Knox Bronson” lamented the theatrical absence or elimination, really, of the peak Tony Gilroy and Alexander Payne big-screen aesthetic, certainly as it existed 15 or 20 years ago. To which I responded…

“This is the death-pill essence of the current cultural depression. Theatrical audiences will almost certainly never again savor adult dramas as whipsmart and meditative and emotionally satisfying as Sideways or Michael Clayton. They weren’t arthouse profound in an Ozu or Bresson or Hitchcock or Bergman-esque sort of way but they were SO DAMN SATISFYING in their jaded, well-ordered, ‘somewhat older guy who’s been around and suffered a few bruises’ fashion, and now, as Ray Liotta’s Henry Hill says at the ending of Goodfellas, ‘It’s over…last night I ordered pasta and they gave me egg noodles and ketchup.’

“The industry currently trying to make product that will fill the 2022 gladiator megaplex arenas…the film industry as we know it has completely thrown in the towel as far as that sort of theatrical film is concerned. It’s over and done with and will never, EVER return. Millennial and Zoomer taste buds + the Marvel scourge + streaming + 80-inch UHD home theatre systems + wokester intimidation & terror + a two-year Covid suffocation have killed this sort of theatrical climate forever.

“Film festivals and streaming are where the action is. Theatrical is a mosh pit these days — purely about satisfying movie fans who’ve been raised and conditioned to expect and accept genre crap and cinematic degradation and the superhero tentpole zone–out syndrome. It’s a whole different realm out there now — the last five or six years have delivered the death blows, shattering those of us who knew the mid-to-late 20th Century film-church realm and occasionally felt the nutrition and the nurturing.”