I’ve never felt so completely burned by a Bluray as I was last week when Kino Lorber’s The Paradine Case arrived. Large sections of it are speckled to death. I’m not talking about a Criterion-style swampy mosquito grainstorm, but a baffling suggestion of micro-sized digital sleet — a literal attack upon the film by billions of icy snowstorm specks.

I couldn’t believe what I was seeing. Kino Lorber is a highly respected outfit, and I’ve been delighted with scores of their Bluray releases over the years. It just doesn’t figure that they would release a classic 1940s film looking as badly as this. (And a Hitchcock yet!) I toughed it out until the end, but what a ripoff. 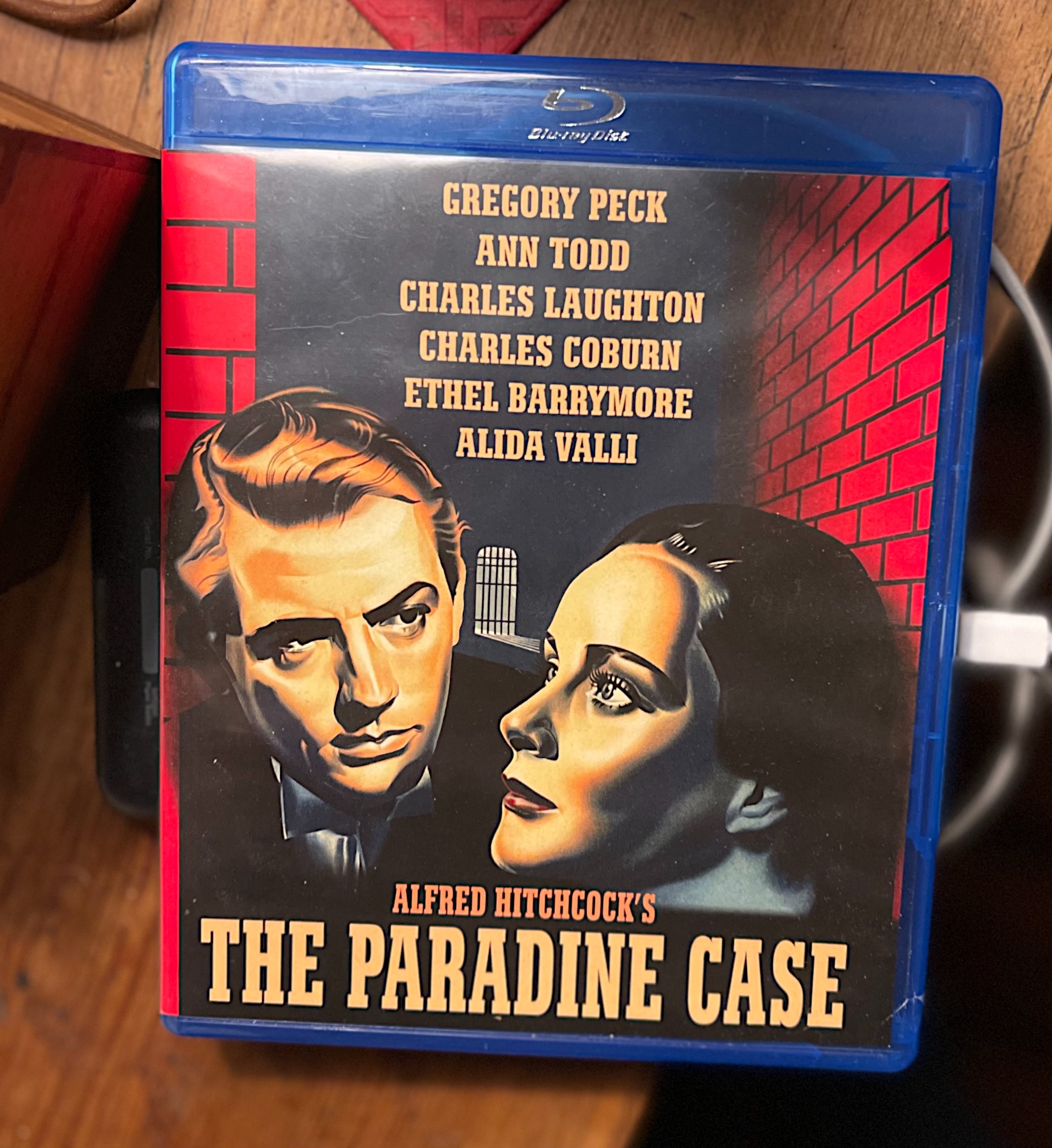 Differing Degrees of Apartness
In terms of choosing the best or most award-worthy films and performances of 2021, most film aficionados (including professional film critics) are fairly conventional thinkers -- easily seduced and led along, committed to familiar and unexceptional viewpoints, etc. Then there are the free thinkers who occasionally (but not always) assess films from a perspective of an earth-orbiting spacecraft or one circling around the moon. And that's fine. The third category could be described as beyond earth's gravitational pull but still tethered to the critic's understanding of cinematic value, based on a lifetime of neurotic filmgoing. Login with Patreon to view this post
January 17, 2022 8:08 pmby Jeffrey Wells
No Comments
Harder Than It Looks

Yesterday Lysa Heslov, wife of The Tender Bar producer and co-writer (and longtime George Clooney pally) Grant Heslov, broke industry protocol by rebuking a couple of Facebook contributors who had posted negative assessments about the film.

Heslov’s main point was that the naysayers were mean and unconstructive, especially about an unpretentious small-town film that had been made from the heart. Last night I summarized what had happened. This morning I posted a thought about the difficulty of making even a mediocre film.

“It’s very hard just to make a decent or passable film that isn’t too bad,” I wrote. “Art isn’t easy, and it’s very difficult to cobble together even a moderately decent dramatic screenplay.

Seriously — the next time you catch a so-so or mildly disappointing film, you need to say to yourself “man, it took a lot of blood, sweat and tears just to make that thing watchable…the filmmakers deserve at least a modicum of respect for that effort.”

Imagine that I’m Ben Affleck, and that I’m doing an interview with some obsequious junket journalist, and that the journalist has just asked which performance I’m most proud of…which single performance has, by my standards, hit the mark in a more incisive and commanding way than any other before or since?

I would say without hesitation that my finest performance is the young, go-getter, fortunate-son, guilt-stricken attorney in Roger Michel‘s Changing Lanes (’02).

The Paramount release was filmed 20 years ago, when I was roughly 29.

My “alcoholic basketball coach in San Pedro” performance in The Way Back is my second favorite in terms of all-around pride, subtle technique and emotional revelation, followed by my “husband under suspicion of murder” performance in Gone Girl. My fourth-place would be my action-commando turn in J.C. Chandor‘s Triple Frontier.

I would refuse to answer a follow-up question about which performances I’m most ashamed of, if any. I have a few failures under my belt, sure, but I wouldn’t discuss them with some mealy-mouthed junket whore.

My favorite non-performative performance was on Real Time with Bill Maher, way back in 2014.

Earlier today Rachel Zegler performed a passionate reading of a portion of Britney Spears‘ recent angry letter to her younger sister, Jamie Lynn Spears. (Nobody cares about the particulars.) Almost immediately Zegler was kicked, gouged and lashed by woke Twitter for showing a lack of sensitivity. And of course she apologized for this.

What Zegler was doing, of course, was seizing upon an acting opportunity, which is what actors often like to do. I happen to feel that she showed more range and angularity and emotional intrigue in this reading than she showed in all of West Side Story, which limited her to playing a willful Puerto Rican innocent. Seriously — Zegler reminded me of Faye Dunaway in Network or Mommie Dearest. I am now more impressed by Zegler’s acting chops than I was before today. 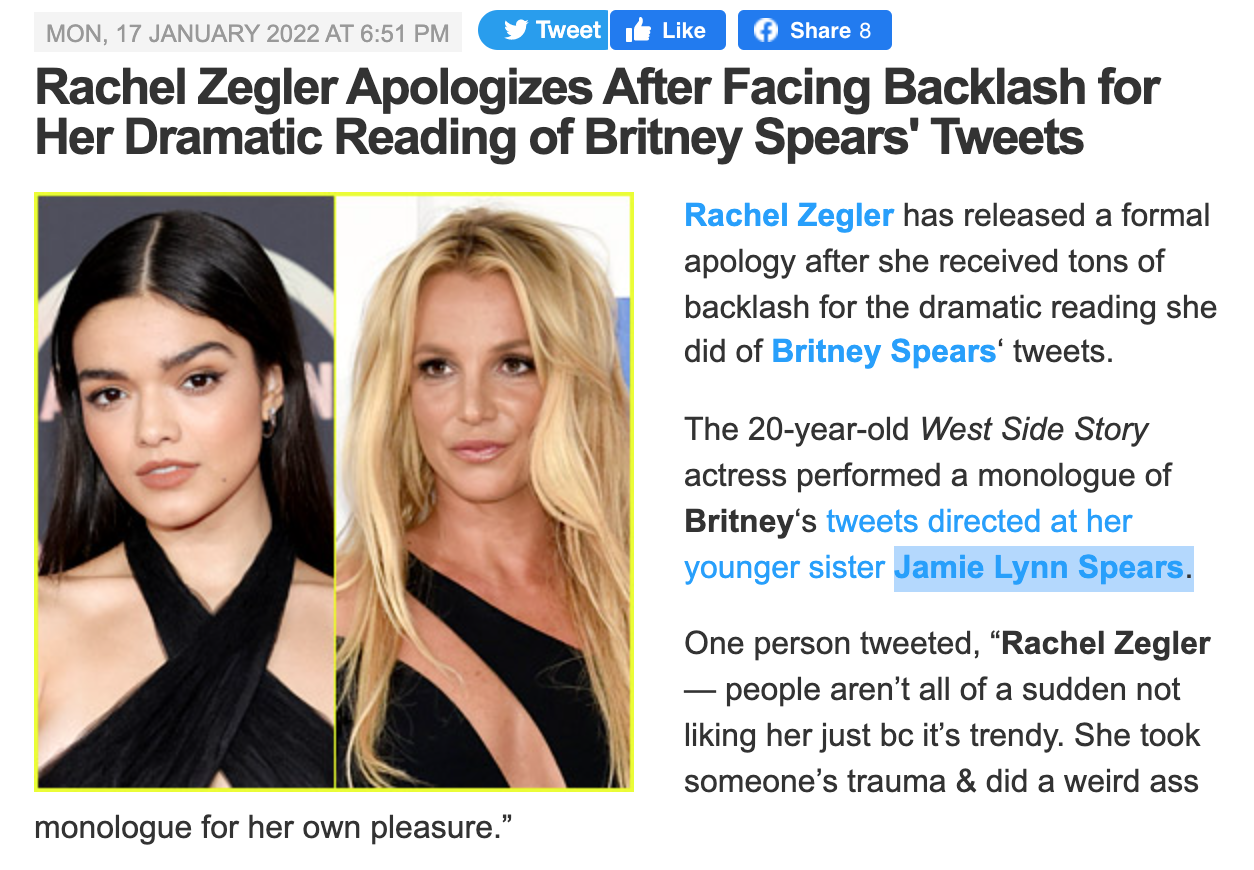 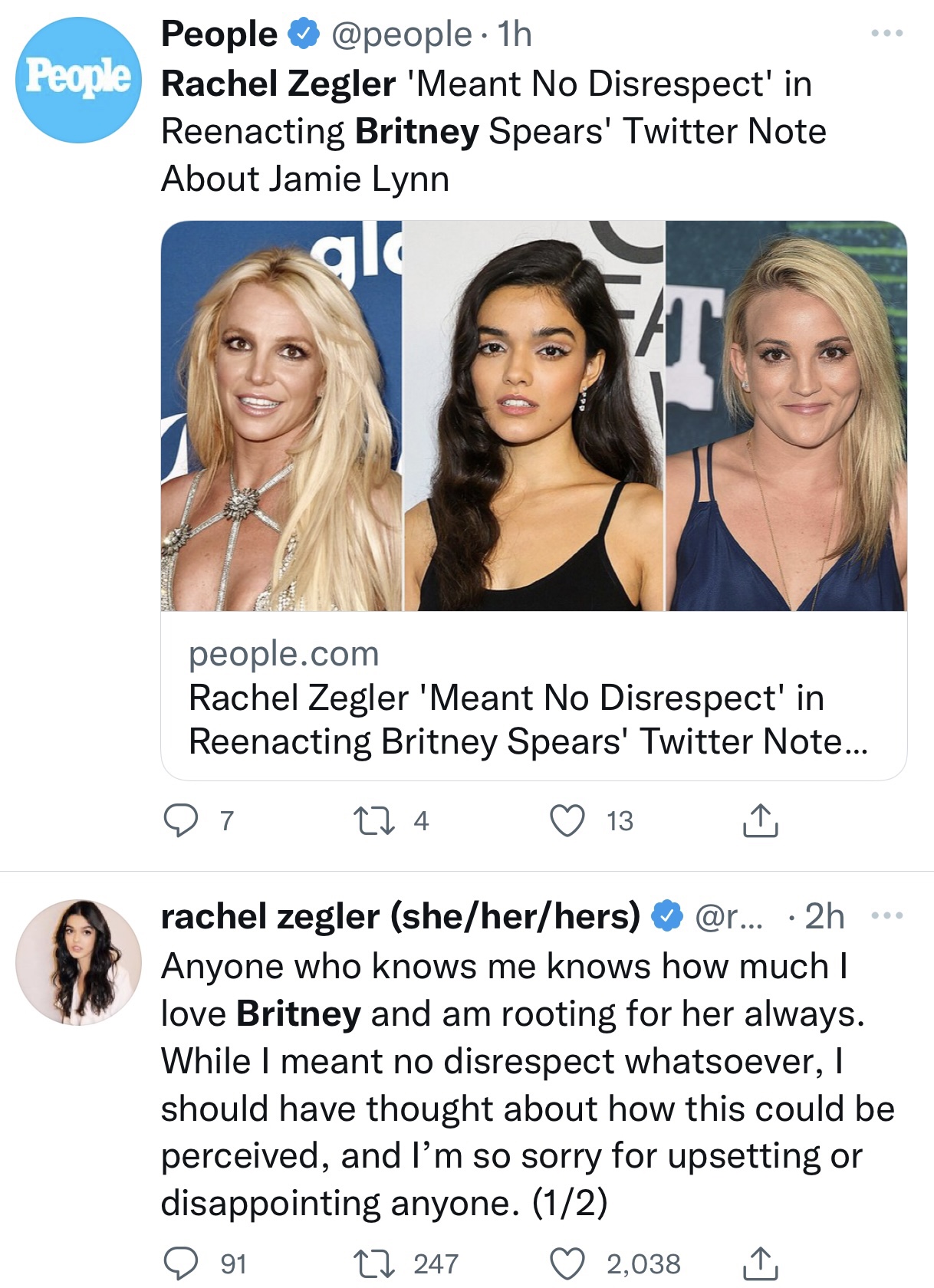