Support on Patreon Follow @wellshwood
No Comments
Time To Step Out

I’ll watch Steven Soderbergh’s Kimi sometime this evening. Until then… 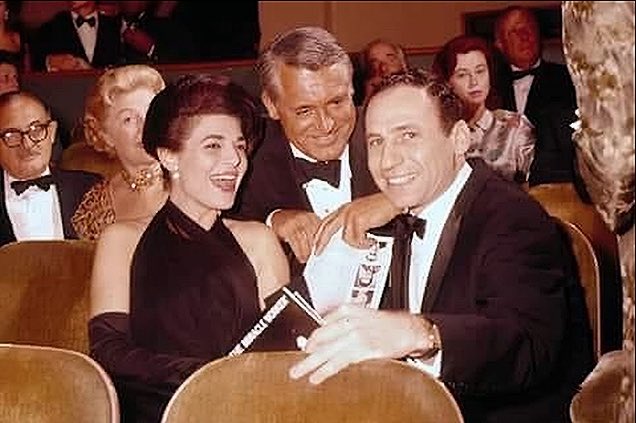 In my book Seth Rogen‘s performance as Rand Gauthier is the best part of Pam & Tommy. That said and no offense, I still have a problem with the light orange and lavender tuxedo that he wore to last year’s Emmy Awards.

Posted earlier today by The Insider‘s Jason Guerrasio: “I don’t get why movie people care so much if other people care what awards we give ourselves,” Rogen told Insider during an interview with Paul Rudd about their Super Bowl commercial for Lay’s potato chips.

“Showtime is billing Sacha Jenkins’ new docuseries Everything’s Gonna Be All White as three parts, plus a bonus episode.

“This is an odd choice of focus. The three episodes are a solid if formally inconsistent attempt to tackle the racial history of America in discipline-spanning socio-economic-cultural terms. It makes some smart connections and is full of worthy insights, but I’d never recommend it over HBO’s similar Exterminate All the Brutes or a dozen PBS docuseries covering the same terrain.” — from Daniel Fienberg‘s 2.10 Hollywood Reporter review.

HE riff on The Stinky Whiteness, for the 17th or 18th time: Democrats have to stand for sensible, compassionate, fair-minded liberalism, etc. JFK-styled or LBJ-flavored or Obama-stamped liberalism means fair but practical policies that are even-steven across the board, or at least ones that try to be that.

I am essentially a sensible non-fanatic as far as racial matters are concerned. Or, if you will, I’m a white John McWhorter who believes in basic fairness and sensible progressive programs. I also believe that activist trans activists and the “what’s your pronoun?” people are fine and no worries but at the same time my eyes are rolling upwards.

To some out there what I’ve just written proves that I’m some kind of salivating racist homophobe. But I’m not. Really. I’m a center-left moderate who’d increasingly appalled by the Crazy Left. Right now I’m beyond furious that these nutters have already shit the bed and are going to bring about a rightwing landslide next fall.

Democrats have become the “African-Americans need to be given preferential treatment in all walks of life in order to correct racist mindsets of the past four centuries” party, or basically the Nikole Hannah Jones 1619 party. Because BIPOCS have been murdered and shat upon for centuries.

Democrats have also become the “children need to be instructed that whites are in the grip of an evil genetic tendency party”, and the time has come for whites to take a back seat in order for progress to manifest. Or words to that effect.

Put another way, the urban elite progressive wing has become the Rosanna Arquette party, and is ruled by the idea that whites must accept across-the-board corrections — they need to bow their heads and accept punishment for their ancestors’ behavior in order to allow for racial re-dress and racially corrective ideas and programs to take hold.

I despise Joe Rogan for having spread bad information about Covid and the vaccines, and thereby encouraged all kinds of idiotic, irresponsible. anti-social behavior in the hinterland realms. But the people who are trying to blow up his career over India Arie’s YouTube n-word montage are much, much worse. HE agrees with Glenn Loury that “the superficial morality of spoken word etiquette versus the genuine morality of a thick, historically informed engagement with important questions of policy, of state, of ethics” are not equally important.

McWhorter: “We can talk about Joe Rogan and the Covid [content] but this other thing…this won’t do.” 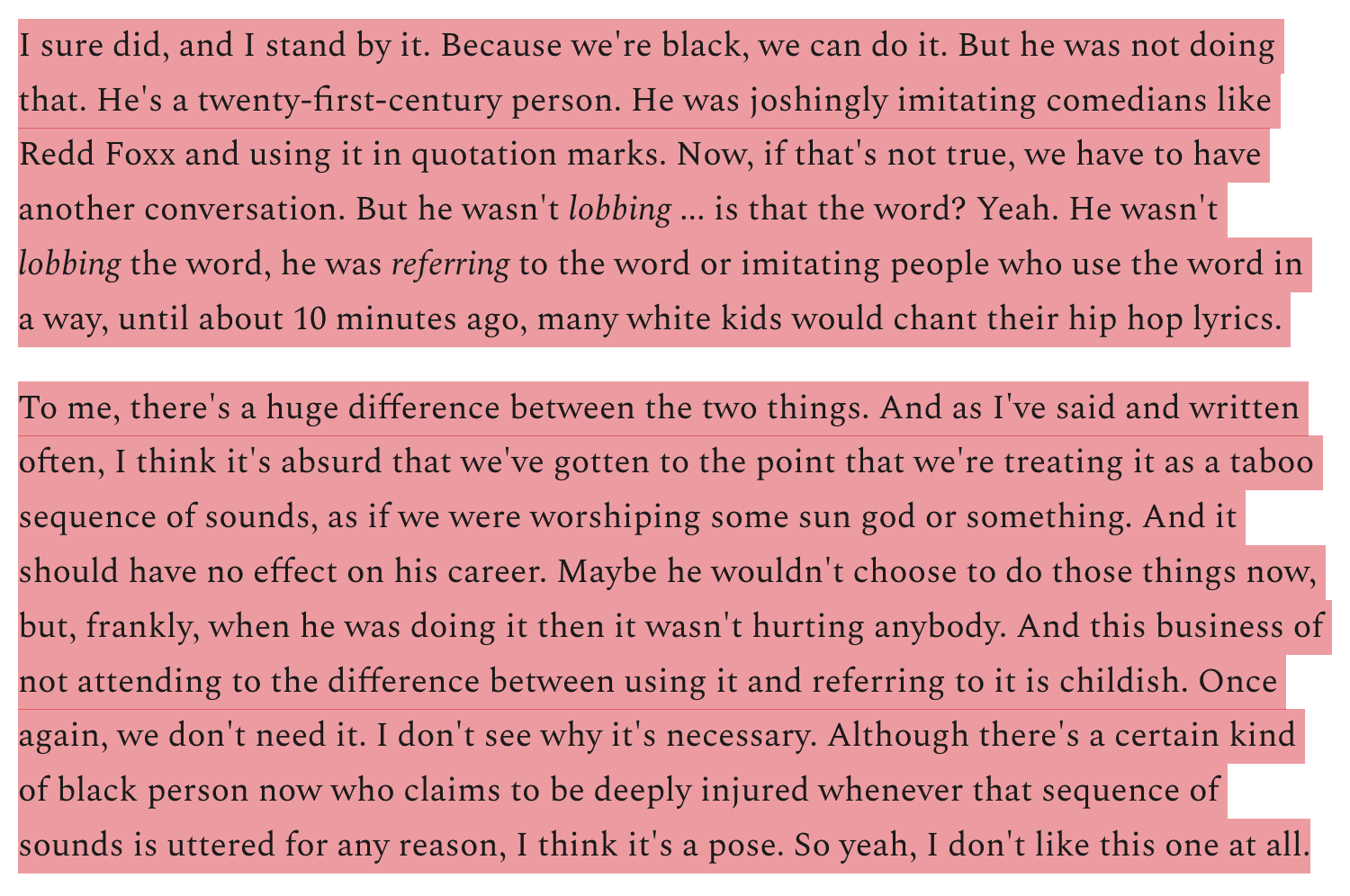 If I had a four year-old daughter who was about to enter pre-school, I wouldn’t let her within 500 feet of this sociopath.

Elementary school counselor. This is who kids are supposed to trust. I would never let her near my kid pic.twitter.com/Re5SK1BwGx

I’ve been thinking about switching from the rumblehog to a decent pre-owned car. I’m no longer flush thanks to the wokesters, but I don’t want to get into a years-long payoff deal. So I’ve been looking for a nice little tool-around car. Something older, a dependable brand (Beemer, Volvo, Nissan), well-maintained. Yesterday afternoon I was attracted to a white 2002 BMW, 165K miles, for $2500. The only hitch is that it’s in Palm Springs. But it seemed appealing so I reached out to the owner, and then the weirdness began.

The owner is a dude — I could tell that much. Right off the top he said “no talking, just text me.” He knows autos and does his own maintenance, but he wouldn’t tell me his name or where he lives, and suggested that our initial meeting happen in front of an office building. It turns out the Beemer needs service — the usual tune-up stuff plus new brake discs and pads, which meant I’d be paying an extra $500 or more — figure $3K and change.

The idea was to travel to Palm Springs later today and test-drive the Beemer, and give it to a local mechanic for approval, and then finalize things on Friday. That meant I’d have to take a bus to Palm Springs and take a few Uber rides and pay the mechanic for his time and stay in a hotel plus meals — another $250 or $300, minimum. Now we’re in the $3400 to $3500 region.

I asked the Palm Springs Phantom if I should call him Mr. X. He laughed. I said I was a journalist and explained about Hollywood Elsewhere, and he said “what’s that?” I assured him that I don’t work for the CIA, the Russians, the Palm Springs vice squad, the FBI or the East German Stasi. “Are you really going to do this cloak-and-dagger thing until I arrive?,” I said. “No name, no gender, no nothing? No offense but this feels a tiny bit weird.”

Mr. X: “That’s because that [stuff] doesn’t matter.”
HE: “I don’t mind the spy-movie intrigue. But there’s something existential about this conversation.”
Mr. X: “Are you actually interested in buying this car?”
HE: “Definitely. But you know what I mean. Your identity is going to come out in the wash anyway, right? Bill of sale, pink slip, transfer of title.”
Mr. X: “Yeah.”
HE: “I am 110% serious.”
Mr. X: “Cool. Sounds good…see you tomorrow, man.”
HE: “So when I knock on the door tomorrow at 5 or so, will you be wearing a Yoda mask?”
Mr. X: “That’s not my home address — that’s a business center.”
HE: “Ahh, got it. Well, this is very shadowy but okay. I’ll find a way out there and line up mechanic, and find a decent motel or hotel. This will be, as noted, a two-day process.”


This morning I decided to blow the whole deal off. A guy who won’t reveal his name or address — what is he, a terrorist? A drug dealer? Plus the whole “take a bus to Palm Springs, take three or four Ubers, stay in a motel plus find and hire a mechanic” thing seemed a bit much. When I told him of my decision, Mr. X said, “You’re wasting my time, bruh.”

I wouldn’t say that a majority of people selling cars on Facebook Marketplace and Craigslist are scammers, but a significant portion are. Plus the people who’ve written me about buying the rumblehog are scammers also. Favorite line: “I’m a sergeant in the military, I’m going overseas with my team”…really? Second favorite line: “I’m selling this for my invalid mother.” A guy with another car for sale (2013 white Impala) wanted to meet him in central Watts (just south of the 105) and bring cash…no PayPal or Venmo. Sure thing.