“There are basically two kinds of people,” critic Harlan Jacobson observed in the mid ‘80s. “Those who think of Bruce Willis and Cybill Shepherd when they hear Moonlighting, and those who think of Jeremy Irons and Jerzy Skolimowski.”

Last night a Wilton friendo said, “Oh, I saw that. The other one.”

Friendo: “The one I saw was five or six years ago. A black kid…”

HE: “That was Moonlight. (beat) Whadja think of that?” 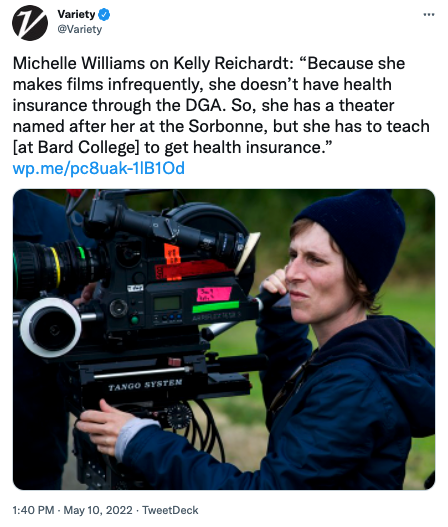 This is two months old — from a 3.13.22 Bill Maher-Ben Shapiro podcast discussion. The main reason we’re afraid to talk about obesity is that a hefty percentage of obese people in this country…forget it. I’ll just get smacked. Forget I mentioned it.

Earlier today The Ankler‘s Jeff Sneider announced that one of the gloomiest and dreariest flicks in the history of cinema — Mark Romanek, Alex Garland and Kazuo Ishiguro‘s Never Let Me Go (’10) — is being relaunched as an FX series under the guidance of DNA Films & TV”s Andrew Macdonald and Allon Reich. What a perfectly dreadful idea. I’m in instant mourning. 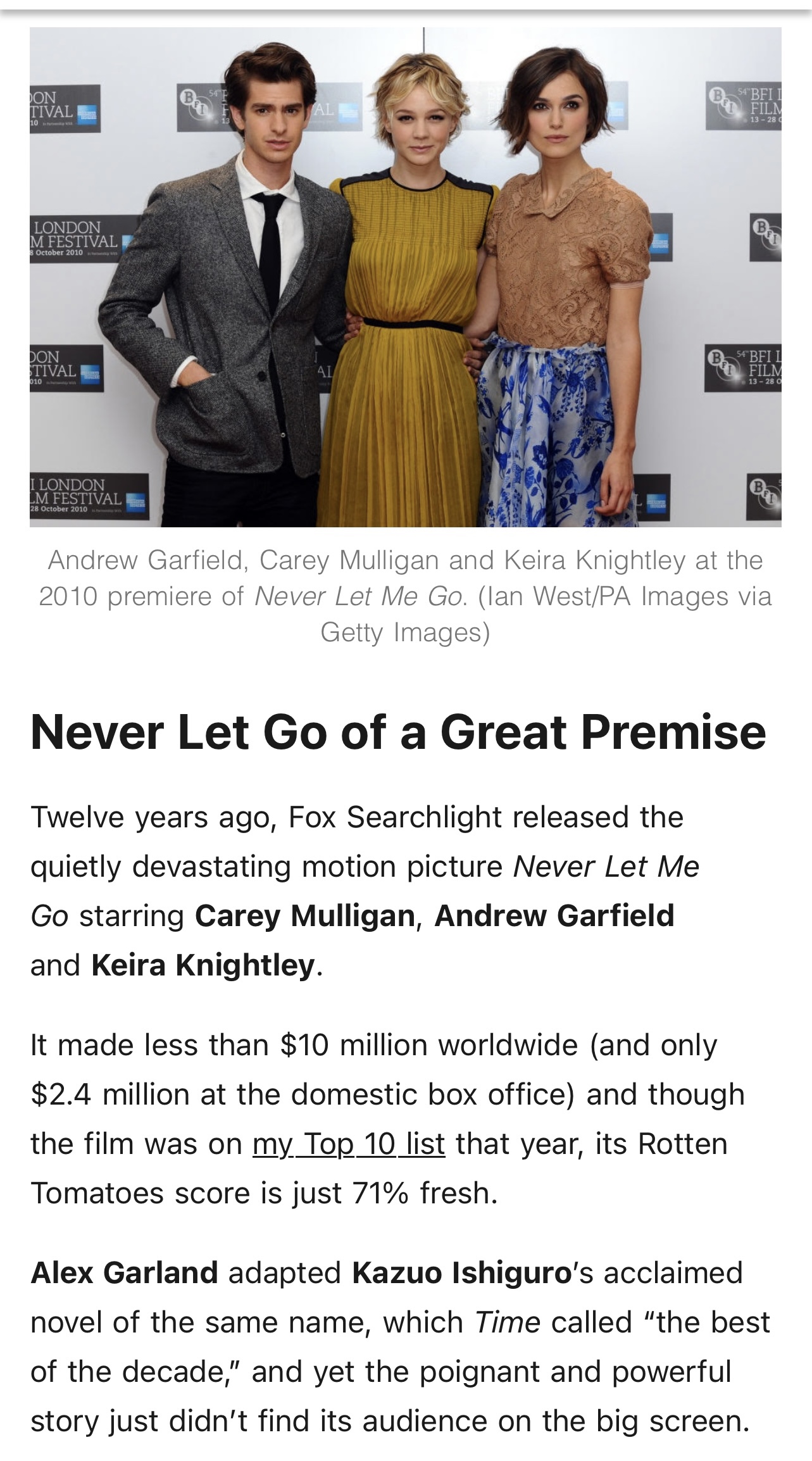 August 2010 HE commentary: It’s not a very well-kept secret that Never Let Me Go deals with a grim-fate dynamic — an oppressive, locked-down situation in which “a long and happy life” isn’t in the cards for the main characters, who have been raised to be organ donors for the rich.

There’s a famous saying about how “the clarity of mind that comes to a man standing on the gallows is wonderful.” As in face facts, sharpen your mind, prioritize.

I’ve always been one, however, to take it a step further and not just prioritize and all that, but to first and foremost revel and rejoice in the immediacy of the symphony of life.

Death is something to be accepted, okay, but primarily fought and strategized against, frequently laughed at, lampooned and pooh-poohed, acknowledged but simultaneously “ignored” (in a manner of speaking), dismissed, despised and raged against (in Dylan Thomas‘s words) right to the end.

There is only life, only the continuance, only the fuel and the fire…only the next step, the next breath, the next meal, the next sip of water, the next hill to climb, the next perfect pair of courdoruy pants, the next adventure, the next hypnotizing woman, the next splash of salt spray in your face, the next staircase to run down two or three steps at a time, the next rental car and the next winding road to concentrate on and carefully negotiate, etc.

Why Exactly Was James Bond Killed?
A conversation about the Bond franchise...a franchise that will most likely continue but which technically no longer exists due to the fact that James Bond was killed at the end of No Time To Die. Here's how I put it earlier today:

Crimes of the Future director-writer David Cronenberg has been predicting Cannes Film Festival walkouts as a kind of taunt. He’s basically asking cineastes if they have the necessary sand. Are you men or milquetoasts? How deep is your ocean? How long is your toleration fuse?

Viewers who bolt out of a Crimes screening, in short, might be frail, anxious, overly self-protecting. The first requirement of a devotional cineaste is an absolute willingness to submit, of course, and if you can’t endure a little psychic disturbance by way of simulated body horror, what good are you?

Fuck all that. In the name of all the tepid souls and conventional comfort-seekers of the movie realm I am ready to whine and howl and kvetch over Crimes of the Future. Deep down I have always been a ponce, a nancy boy. I go to movies to feel more alive and self-aware and connected to the universe, and I’ve never gotten how depictions of body mutilation are in any way edifying or nutritious.

Sitting through scenes of body horror and mutilation over the years, “real” or imagined…Cronenberg’s Videodrome, The Brood, Crash, Dead Ringers and The Fly, not to mention Stuart Gordon’s Re–Animator and Alex Garland’s Never Let Me Go…yes, these scenes have enhanced or enriched or added dimension to my moviegoing life. At the very least I’m glad I’ve seen them.

But did I enjoy watching them during the actual moment of exposure? Nope — I winced through each wincing moment, and I haven’t re-watched any of these except Re–Animator, mainly because of the humor. The only Cronenberg film I’ve watched several times is The Dead Zone.

Cronenberg himself has claimed that his films are “funny,” but only in a dry, perverse, no-laugh-funny sense.

Will I be man enough to handle the grisly stuff in Crimes of the Future? I may be, but I know right now I’ll be groaning.