Support on Patreon Follow @wellshwood
No Comments
The Hell Is This?

One-third of the Joe and Jane Popcorn crowd doesn’t like Watcher? Not the movie’s fault in the slightest — it’s their problem.

HE approves of this unofficial Watcher poster from Chloe Okuno…grade-A, haunting in exactly the right way & summoning the right Maika Monroe mood, etc. 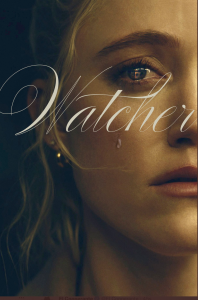 DataLounge, the greatest, funniest and most nourishing gay gossip site on the entire planet, is 27 years old, and glory hallelujah.

I don’t know how large the readership is, but I love that DL is part of the conversation, and especially that the commenters don’t filter themselves. Because when it comes to judging or challenging sacred-cow narratives in the universe of woke (yes!), they’re protected by their identity.

Straight white guys have to phrase carefully and watch their backs, but gay guys (especially under the cloak of DL anonymity) don’t give a toss.

Read their recent Bradley Cooper comments…merciless here and there. And their remarks about Brad Pitt‘s new GQ cover, etc.

6.22 thread titled “Congratulations to all the trannies out there for ruining everything for us” — “You took our organizations. You took our pride festivals. You took our progress and reversed it. Now the right wing is coming after us because you had to use women’s restrooms and go after little boys with your puberty blockers. We are eternally grateful.”

6.22 thread titled “When did we decide that the word ‘progressive’ is synonymous with ‘insane?’”

“It used to be that progressives would champion causes like women’s suffrage, civil rights, ending discrimination against racial minorities and gays,

enacting laws to protect women and children against abuse.

“But today, it seems like the only things progressives care about are these psychotic, whacked out initiatives like designer pronouns, allowing transvestites into women’s restrooms, and transitioning little boys into little girls.

“So if you’re a man who wants to be a woman, you can take hormones, get breast implants, and have an operation to mangle your penis, and then you get to forcibly shame everyone else into pretending that you’re a woman?

“If you’re a dumb teenager who wants to feel special, you can adopt some stupid pronouns and then forcibly shame everyone else into pretending your invented gender is real?

“How is this progress?”

The murmuring pines and the hemlocks / Bearded with moss, and in garments green, indistinct in the twilight / Stand like Druids of eld, with voices sad and prophetic.

This morning I drove over to inspect a Wilton rental that’s up for grabs. A friend is looking to possibly move here. The current tenant is in the process of moving out, but with a fresh paint job, some posters, plants and lamps and some nice furniture and whatnot it’ll be a good place to live, not to mention the abundant greenery on all sides. Good for pets.

No Comments
Good To Go

The six-year-old marriage between Rupert Murdoch and Jerry Hall is said to be kaput. The union may have provided emotional comfort to Murdoch for a certain period of time and perhaps even to Hall, but we all understood from the get-go that this was a transactional arrangement first and foremost, based on some sort of ironclad agreement that if it didn’t work out Hall would walk away flush. Nothing lasts forever including human beings. Six years is six years. Tomorrow is another day. 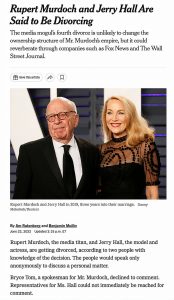 They come out of nowhere…films you never felt much enthusiasm for, but then one day you suddenly want to give them another shot. And then you do, and you discover that (a) they’re just as dispiriting as you remember or (b) they play somewhat better than you expected.

For me, Anthony Minghella‘s Breaking and Entering (’06) is one of those films. Or it became one, I should say, two or three hours ago.

If Minghella were with us today, would he be a wokester? Or a contrarian like myself — an “East Berliner”?

One reason I’d like to re-watch this film is because there are no decent HD clips or trailers — everything looks soft and fuzzy.

Posted on 12.14.06: “Minghella’s screenplay was inspired by his London studio flat having been repeatedly burgled three or four years ago when he was off making Cold Mountain in Romania. Similarly, an office managed by a married architect (Jude Law) and his partner in London’s half-seedy, half-emerging King’s Cross district is repeatedly broken into and ripped off.

“Law eventually spots the teenaged thief (Rafi Gavron), follows him home, and develops an immediate attraction for his Bosnian-refugee mom (Juliette Binoche). Curiously, despite Law’s well-known tabloid history and the fact that he may have portrayed one too many hounds over the past three or four years (Closer, Alfie), he and Binoche quickly sink into a steamy affair. As soon as it begins you can’t help but think, ‘Here we go again.’

“Minghella is a major believer in volcanic currents between lovers, and it’s clear he feels more of an allegiance to Law’s affair with Binoche than Law’s marriage to a chilly Nordic blonde (Robin Wright Penn) who always seems vaguely pissed about something or other. There are no sex scenes between Law and Penn (naturally, given the nature of most marriages) but the action he shares with Binoche is intense and quite splendid.

“The fact that Law gives her great oral sex seems to underline Minghella’s basic attitude, which is that he’s much more into exotic and uncertain alliances than steady and familiar ones.

“In a 12.14.06 article, N.Y. Times profiler Sarah Lyall says noted that Breaking and Entering is about a “clash of cultures between the rich and the poor, the privileged and the disaffected, that churns beneath the surface of contemporary London.” This is certainly a part of it, but the movie eventually settles into a kind of guilty meditation piece that’s half about Law’s wandering penis and half about class disparity and liberal guilt.

“Some people have been muttering that the film is inconclusive, half-there and indifferently off on its own beam. The biggest complaint is that it has a lousy ending, which it does. But it’s not a ‘bad’ film, by which I mean it’s not, you know, boring.

“The performances by Law, Binoche, Rafi Gavron and Ray Winstone (as a detective) are more than absorbing for the most part, and the atmosphere seems recognizably “real.” But there’s not a lot of residue when you leave the theatre. The film does a fast fade in your head.

Just as there are some actors with faces you can’t help liking or easing into without effort, there are faces on the other side of the canyon that you don’t like very much. As in instantly, no thinking about it. Faces you’d like to punch once or twice, or at the very least avoid.

I laughed when I read about Carlo Simone‘s wife instantly disliking the face of Cooper Raiff, the director-producer-writer of Cha Cha Real Smooth (Apple+, 6.17). I don’t happen to like his face all that much either, but I can roll with it. The topic, however, is certainly discussable across the board. Which actors have faces that the HE community just can’t stand? It’s rash and cruel to indulge such reactions, but we all feel them (at least briefly) from time to time.

HE’s pet animal-dislike peeves: (1) Matt Smith, the guy who played the sleazeball pimp in Last Night in Soho and the title role in Ondi Timoner‘s Mapplethorpe, (2) Michael Fassbender, (3) Ben Mendelsohn, the Australian actor who build his career out of performances in which he smoked cigarettes and sweated buckets, (4) Michael Cera, (5) Aaron Paul. And this is not a complete list. I’m just trying to get the ball rolling.

Note: Jon Bernthal used to be on HE’s animal-dislike list, but I took him off after his performances in Ford vs. Ferrari and Those Who Wish Me Dead.