Support on Patreon Follow @wellshwood
31 Comments
Influence of Cecil B.

Flanked by his parents (Paul Dano, Michelle Williams), 7 year-old Sammy Fabelman (Mateo Zoryna Francis-Deford) is wow-wow-wowed by Cecil B. DeMille’s recently released The Greatest Show on Earth (‘52). It’s an early scene from Steven Spielberg’s semi-autobiographical The Fabelmans (Universal, 11.11), which will premiere during the ‘22 Toronto Film Festival.

Clarifying
The same seasoned director–writer who told me about reactions to the Batgirl screening ("It makes Catwoman with Halle Berry seem like Abel Gance’s Napoleon") says that (a) "orders came from the highest Warner Bros. level to put the Batgirl dailies, elements and preview cut on lockdown", but that (b) "any reports that it's been deleted are not true. But it will never be leaked anywhere."

Unreliable Airplane, To Put It Mildly
8.23 Washington Post story by Faiz Siddiqui, Elizabeth Dwoskin, Cat Zakrzewski and Rachel Lerman: "Former head of security Peiter "Mudge" Zatko [has accused] Twitter of “lying about Bots to Elon Musk” in a whistleblower complaint filed in July with regulators, including the Securities and Exchange Commission, a copy of which was obtained by The Washington Post.

Gender Neutral Body Snatchers
In terms of the acting awards, Spirit Award wokesters have announced an abandonment of gender categories. No more Best Actor, Best Actress, Best Supporting Actor or Best Supporting Actress categories. Which is what the Gotham guys did a year or two ago. It's insane but real...they're doing it.

It was almost exactly three years ago (8.25.19) that HE suffered through an early evening visit to Moonshadows, the obnoxious tourist-trap beachside restaurant in Malibu. Here’s what I wrote:

Last weekend I made the mistake of taking Tatiana to dinner at Moonshadows Mailbu. I hadn’t been there in decades, but it’s a famous Malibu mainstay as well as the place Mel Gibson got drunk in before being arrested for DUI in July ’06. It will always appeal to gawking tourists and Lookie Lous because of the surfside location.

I took an instant dislike to the place, and when I got home I made a list of the reasons why. There were five of them. (1) Too many loud people congregated in a tight setting and generating so much conversational racket that I had a headache almost immediately; (2) Too many unattractive people who were either over-dressed or lacked that certain je ne sais quoi X-factor coolness that everyone needs to project when they’re out on the town; (3) Seriously ugly decor (baby blue seating booths with small and kitschy amber-toned lamps); (4) Decent but far from phenomenal food; and (5) A bizarre table-seating policy that may or may not have involved some kind of unsavory arrangement.

All I know is that the hostess declined to seat us next to an oceanview window, and when Tatiana asked why the hostess explained that a certain table in question was being held for a party of four that hadn’t yet arrived. In the politest terms I could muster I asked, “Well, are they royalty? What’s the special dispensation? We’re here in good faith and money in our pocket, and we’d like to sit at that open table so why can’t we exactly?” The hostess said that the party in question has paid a thousand bucks to Moonshadows so they’d always get a windowside table when they ate there.

Me (slightly agog): “Really?” Hostess: “Yeah. A thousand sounds like a lot, I agree, but…”

For the rest of the dinner I couldn’t think of anything else except this alleged thousand-dollar payoff. I was wondering how it worked exactly. Was it a thousand a year or twice annually or…? We asked our friendly waiter but he didn’t know of any such arrangement. I called the next day and spoke to a manager, a guy who said he’s worked at Moonshadows for many years, and he also said he was unaware of any such system.

All I can tell you is that the hostess said what she said, and that I didn’t imagine it.

I will never, ever go to Moonshadows again. I would rather eat a hot dog while sitting on the beach. I would rather go to Jack in the Box. On top of which Pacific Coast Highway is such an aggressive, high-speed thoroughfare. They say that the ocean is calming and restorative but not out there. I’ve been to beachside communities all over the globe, and Malibu is easily the worst of them. It has no sense of peace or tranquility.

Old Hounds Refuse to Listen
How many times do I have to repeat this? Lusty old-dog celebrities who may have enjoyed sampling available fruit back in the lascivious '70s, '80s, '90s and even the early aughts...these stubborn old coots have to understand that their poon days are over and done with, and if they don't listen they're going to be accused and prosecuted and thrown into the wolf pit. Because if they make the slightest move on anyone under the age of 50 TMZ will be chasing them around parking lots and gas stations within 48 to 72 hours. And yet they won't listen. It's pathetic but they just won't.

Last Saturday (8.20) Ben Affleck and Jennifer Lopez were re-married (following their quickie Las Vegas ceremony on 7.16) at Ben’s sprawling, semi-historic 87-acre plantation south of Savannah. Dozens of guests, catered up the wazoo, champagne on ice, no expense spared, a splendid time had by all.

All the press reports have described Ben’s spread as being either “in” Savannah or “just south” of it. In fact the Liberty County residence (which includes a 6,000 sq. ft. main house, a cottage house and a 10,000 sq. ft. guest house) is well south of Savannah, and in fact south of the Savannah suburb of Richmond Hill.

The hard truth is that Bennifer plantation is located between 35 and 40 minutes south of downtown Savannah…okay? Don’t lie about this. It’s way the hell out of town.

The luxurious spread sits on the banks of historic Blackbeard Creek — named after Blackbeard the pirate. It’s basically in the blue-collar boonies. The property isn’t that far from the moderately noisy interstate 95 and a little more than a mile south of a huge Target distribution center, and just east of Newport Timber in Riceboro.

Midway, Georgia is three or four miles to the northwest.

The home actually lies near an old settlement called Seabrook. Wikipedia says Seabrook “was originally built up chiefly by former slaves”…whoops! Couple this with Affleck’s Savannah-residing ancestor, Benjamin Cole, being a slave owner…okay, leave it there. 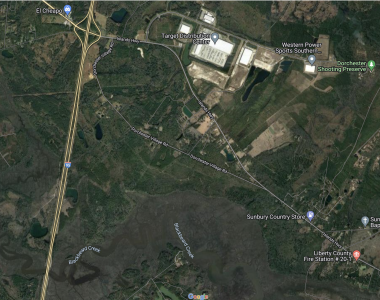