Hope For “EEAAO” Naysayers!
If you carefully read Pete Hammond's Deadline assessment of the possible Oscar fortunes of Everything Everywhere All At Once, there's reason to believe that it might lose. Login with Patreon to view this post
January 25, 2023 3:02 pmby Jeff Wells
13 Comments

Formidable Fellows
Alejandro Gonzales Inarritu has reiterated his disdain for superhero movies. He recently told Variety's Marc Malkin that superheroes are "sad figures," although inorganic or uninvested is probably closer to the mark. Overly confident, No pain or gain. Login with Patreon to view this post
January 25, 2023 1:37 pmby Jeff Wells

It was asserted yesterday that for All Quiet on the Western Front to win the Best Picture Oscar, “It must win Best Adapted screenplay, but that will be tough because Sarah Polley could definitely win that.”

It was then claimed that whichever film wins the Best Original Screenplay Oscar, Banshees or EEAAO, that is your Best Picture winner. What else can Banshees win?  If Kerry Condon wins, it’s over.  Banshees will take the Best Picture Oscar.

It was pointed out that a film “usually can’t win Best Picture Oscar without a Best actor nom, a Best Screenplay nom/win, and a Best Editing nom.”

The same guy said “if Judd Hirsch wins the Don Ameche award, then The Fabelmans could win.”

He concluded by saying that Top Gun: Maverick, which will almost certainly win Oscars for sound and editing, can only win if it somehow wins Best Screenplay, but that ain’t happening.”

And I went “Ohhhhh, yeaaahhhh.”

Friendo: “Any thoughts on Jacob Bernstein’s 1.21 NY Times piece about the last days of Nikki Finke?”

HE: “What’s there to say? Okay, to some extent Fink wept and lamented as she faced the Big Sleep, and to some extent she was accepting. Most of the article is a “Nikki’s greatest hits” rehash. The only new material (at the beginning and end) is from a friend of Nikki’s, Diane Haithman, who helped her during the waning days.

“For what it’s worth, Jay Penske comes off like a human being.

“The piece says, by the way, that Finke died last October at Hospice by the Sea in Boca Raton. In fact it’s located roughly 20 blocks from the sea. It should be called Hospice by Interstate 95.

“The important thing, no offense, is that she’s dead. Nobody wept when J.J. Hunsecker passed on either.” 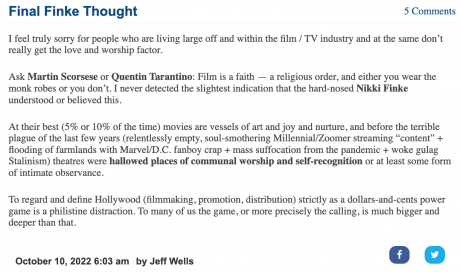 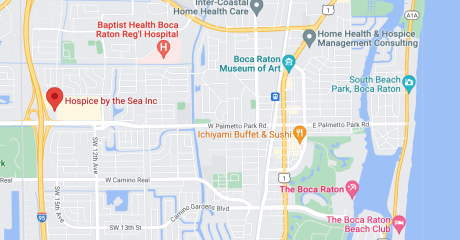 Cave-Dwelling As Spiritual Calling
Last night "Correcting Jeff," one of the more dickish and obnoxious HE comment hounds, stated that "cinema died years ago, yet Oscar bloggers fight on like Japanese soldiers hiding in caves." Login with Patreon to view this post
January 25, 2023 5:53 amby Jeff Wells