An industry friend who’s spoken to a couple of attorneys about Michael Egan‘s sex-abuse lawsuit against X-Men: Days of Future Past director Bryan Singer has been told that the case is weak or, to put it more bluntly, “shit.” The 15-year delay in filing. Egan’s 2000 lawsuit that didn’t mention Singer. Singer’s contention that he was absorbed in pre-production in Toronto in the early fall of 1999, which is when the alleged abuse happened in Oahu at the Mitchell resort. Not to mention the ability of Singer and his attorney Marty Singer to spend their opponents to death with delays and motions and whatnot. Not to mention attorney Singer’s announced intention to countersue.

My friend suspects that the reason Egan’s attorney Jeff Herman staged a press conference two days ago (i.e., Thursday) was that he was looking to “shake the tree” in hopes of getting “more plaintiffs” — i.e., twinks who may or may not have “been” with Singer under similar circumstances — to come forward. Egan joined by a fresh twink means a stronger case against Singer; Egan plus two or three twinks means an even stronger case, and so on. Herman said Thursday that Egan’s lawsuit is the first of several that will be released next week in hopes of ending “pedophile rings” he said exist in Hollywood. “Hollywood’s got a problem,” he said at the press conference. “Since filing this lawsuit yesterday, I’ve heard from many people who allege that as children in Hollywood, they’ve been abused.”

Right after this portion of last night’s Rami Malek interview, Scott Feinberg brought up “the elephant in the room” — director Bryan Singer. I described Malek’s reaction last night — empathy for Singer’s alleged victims, a terse and steely dismissal of the director himself. We all understand the campaign narrative — Singer may have directed 90% of the film but he’s currently radioactive, so his contributions are dismissable.

It’s significant but unsurprising that the Santa Barbara Film Festival video team decided to lop off the portion of the interview in which Singer was discussed.

A couple of weeks before the 11.2 opening of Bohemian Rhapsody, director Bryan Singer posted an Instagram statement about a long-in-the-works Esquire article about the director’s whole checkered history with twinks, some of which have been called into question.

Singer wrote that the Esquire article would “rehash false accusations and bogus lawsuits” about the sexual assault allegations that have been thrown upon his doorstep.

“I have known for some time that Esquire magazine may publish a negative article about me,” Singer said. “They have contacted my friends, colleagues, and people I don’t even know. In today’s’ climate where people’s careers are being harmed by mere accusations, what Esquire is attempting to do is a reckless disregard for the truth, making assumptions that are fictional and irresponsible.” 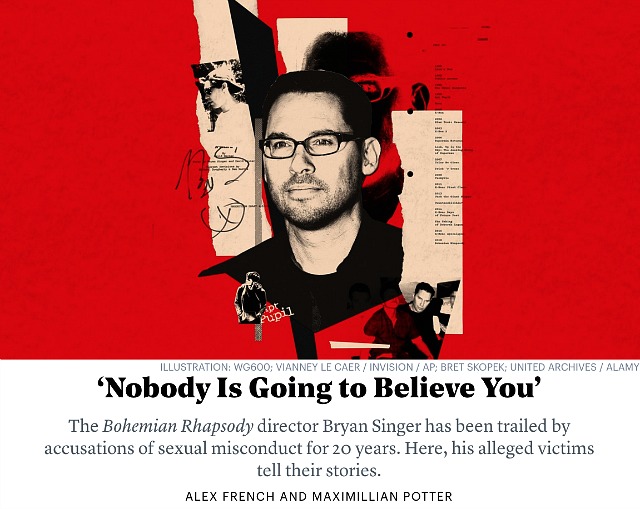 Esquire‘s expected publishing of the piece would have presumably been timed to coincide with 20th Century Fox’s Bohemian Rhapsody promotion. Except the article, written by Alex French and Maximillian Potter, never appeared. Not last year, I mean. Now it finally has, but in the Atlantic, not Esquire.

The piece, currently on the Atlantic website, is well-sourced and quite brutal.

Singer’s latest statement, given to Variety‘s Gene Maddaus: “The last time I posted about this subject, Esquire magazine was preparing to publish an article written by a homophobic journalist who has a bizarre obsession with me dating back to 1997. After careful fact-checking and, in consideration of the lack of credible sources, Esquire chose not to publish this piece of vendetta journalism.

“That didn’t stop this writer from selling it to The Atlantic. It’s sad that The Atlantic would stoop to this low standard of journalistic integrity. Again, I am forced to reiterate that this story rehashes claims from bogus lawsuits filed by a disreputable cast of individuals willing to lie for money or attention. And it is no surprise that, with Bohemian Rhapsody being an award-winning hit, this homophobic smear piece has been conveniently timed to take advantage of its success.”

Excerpt from French and Potter’s Atlantic piece: “We spent 12 months investigating various lawsuits and allegations against Singer. In total, we spoke with more than 50 sources, including four men who have never before told their stories to reporters.

I guess I was too hesitant yesterday in acknowledging that Singer’s explosive temper wasn’t the only reason he left the Bohemian Rhapsody set three weeks before the end of filming. Temper was part of it. He’d gone AWOL on at least one previous film, The Usual Suspects, and allegedly one or two others. But this fresh wave of twink bacchanalia stories can’t be coincidental.

A second lawsuit filed by a former teenaged “twink” against Bryan Singer was announced yesterday by attorney Jeff Herman. The plaintiff is anonymous and British and younger than the first plaintiff, Michael Egan, as he claims to have been violated at a tender age at a Superman Returns after-party, or eight years ago. A statement reads that the plaintiff has only recently become cognizant of the “psychological and emotional injuries, mental anguish and loss of enjoyment of life” as a result of the alleged sexual abuse. Translation: the plaintiff read about Egan’s lawsuit against Singer and figured he could join in.

Singer has led a libertine life over the past 18 or so years. No one’s disputing that. Perhaps an age-of-consent line was inadvertently crossed once or twice, but powerful Hollywood types have been liberally partaking of sexual opportunities with young, looking-to-break-in partners for a long, long time. It’s how things have operated since the days of the Jesse L. Lasky Feature Play Company and the 1914 release of The Squaw Man. Favor for favor. An industry friend believes that Herman is on to something and that many more plaintiffs will be coming forward once the momentum really starts.

Recent comments on Queerty, a tabloidy gay gossip website, about the Bryan Singer-Michael Egan scandal are probably somewhat indicative of under-40 gay community sentiment. So rather than listen to me, a lifelong straight guy who finds Egan’s stories about having been repeatedly and forcibly violated a bit questionable, consider the responses to today’s (4.18) Queerty story about Singer and director Roland Emmerich having thrown huge “twink” parties (along with a photo of Singer and a young blond kid). These guys obviously have a degree of insight and perspective that straights can’t have. 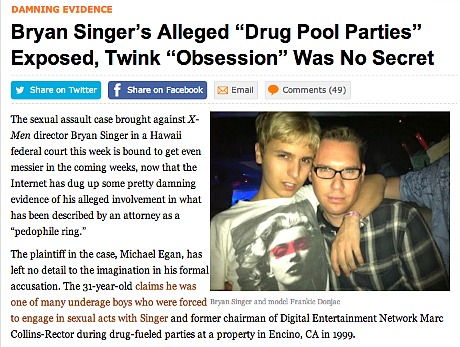