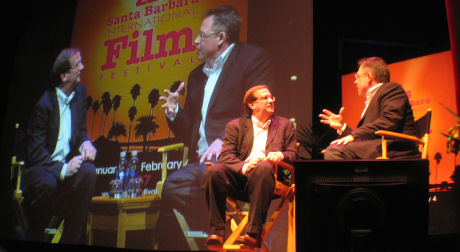 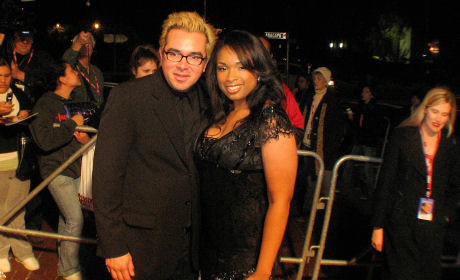 For anyone heading to the 57th Berlin International Film Festival (February 8 thru 18), here’s a programming rundown. One note of concern ; Gregory Nava‘s Bordertown, the Jennifer Lopez drama about the scores of unsolved Juarez-El Paso female murders, is skedded to be shown. This turkey has been looking for a distributor for eons and finding no love. Lopez movies are almost always mawkish, straining, off-balance. Didn’t she say she was looking to quit movies a while back? That awful Bronx accent she accentuates in the trailer for El Cantante is beyond grating — it rivals Lorraine Bracco‘s in Medicine Man.

I had only one medium-sized problem with the rough version of Resurrecting the Champ, which director Rod Lurie showed me several weeks before it played at Sundance ’07. The problem was Samuel L. Jackson‘s decision to play the lead character, a homeless guy with a secretive past, with a “whinny” voice — a raspy-reedy emission that feels like the polar opposite of Jackson’s usual sonorous, street-cat tenor-baritone thing.

Jackson in Resurrecting the Champ; Brando in The Godfather

The performance itself is solid and emotionally on-target, but I felt two ways about the whinny — it reminded me of Marlon Brando‘s voice after he gets shot in The Godfather (“We didn’t have enough time, Michael….not enough time”) and it felt a little too actorish, by which I sorta kinda mean indulgent. Like Kevin Costner‘s mid-Atlantic accent in Robin Hood, it seems to get in the way more than anything else. Forces of nature like Jackson should never do voices or accents — movie stars should always be the same guy.
Jackson’s performance has been totally captivating for some. The Hollywood Reporter‘s Duane Byrge called it “knock-out ” and “terrific,” so take my opinion with a grain. (For whatever reason, Variety didn’t review it during Sundance.)
I wrote several weeks prior to Sundance that I’d seen a rough version of Champ. The version that was shown in Park City was, I’m told, 10 or 15 minutes shorter. I’m still not going to spill anything, but the script — written by Lurie, Allison Burnett, Michael Bortman and Chris Gerolmo — has a fascinating second-act turn. The nominal plot is about a youngish, not-quite-established sports reporter (Josh Hartnett) lucking into a big story when he discovers that a frail homeless guy (Jackson) is actually a former heavyweight boxing champion previously thought to be dead. But the title doesn’t mean what you might think.
Alan Alda and Peter Coyote give the best supporting performances. The most unwelcome (for me, in the longer cut) was Kathryn Morris‘s performance as Hartnett’s wife. Not because she’s unskilled or unappealing (far from it) but because she chose to wear a pissed-off, nagging-wife, guilt-trip expression during the bulk of her screen time. I delicately suggested to Lurie that he do something about this in the final edit — it’s the same expression my ex-wife used to have when our marriage was falling apart, and as much of an asshole as this might make me sound, it felt irritating as shit to absorb this on a scene-after-scene basis.

In a piece timed to ride the marketing back of Number 23 (New Line, 2.23), the Joel Schumacher creeper about a face-painted wackjob obsessive played by Jim Carrey, industry journalista Kim Masters has written about Carrey’s career “crash” in the new Radar, which will hit the stands in about two weeks. Radar‘s publicist won’t show me the article, but it’s at least partly about the big-studio plug-pullings of Used Guys and Ripley’s Believe It Or Not, both of which Carrey had intended to star in. 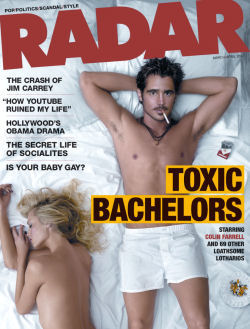 “Whatever Little Miss Sunshine is about, it isn’t about anything bad,” Oscarwatch.com’s Sasha Stone wrote yesterday morning, echoing Richard Corliss‘s just-posted views in Time. “It’s all good. It deals with the goodness of humanity underneath it all; it has an idealist’s view of people. It is the only one of the five [Best Picture nominees] that does. 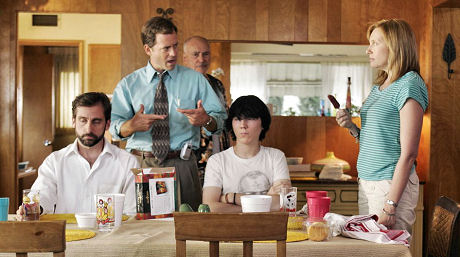 “The country needs to vote for Little Miss Sunshine because to do anything else opens the door to the truth. We can’t handle the truth, not right now, not when we don’t really know what’s coming next.
“Like the psychiatrist who tells Alvy Singer in Annie Hall that “the universe won’t be expanding for billions of years yet, Alvy, so why don’t we enjoy ourselves while we’re here?”, films like Little Miss Sunshine, Crash, Million Dollar Baby and A Beautiful Mind affirm our need to believe that we are all honorable, good people. Moreover, [that] good people win even when they’re losing.”
And yet each of the above-listed films burrows into some pretty dark places. They may have presented positive portraits of their characters and worked with sanitized and/or tidied-up plots, but they don’t give the impression of shirking or sugar-coating life in its more subterranean realms. Family dysfunction, career failure, suicide, insanity, euthanasia, racism — hardly escapist-minded subject matter.

Armond White‘s N.Y. Press review of Becket is more than a little similar to an appraisal I wrote last year….odd. Easily the most single-minded Manhattan- maverick critic (at times almost peculiarly so), White is an absolute must-read because of his occasional grand-slams — reviews that pinpoint not only the artistic dimension but the agenda of certain films, like when he called Billy Elliott “a balletomane chickenhawk fantasy.”
“Ostensibly the story of King Henry II appointing his confident Thomas a’ Becket to be Archbishop of Canterbury and then reneging on his bequest — a decision that historically split England’s religious affiliation — Becket is mostly fascinating as a love story between two men,” he writes. “Jean Anoulih‘s stage play is strengthened by the conflict of worldly affection and spiritual devotion when Becket’s born-again allegiance to God takes precedent over his fealty to Henry. This movie version is deeper than anything the makers of Brokeback Mountain could ever conceive — or admit to.
“Reseeing Becket in light of the recent so-called breakthrough for gay film subjects makes one realize how advanced mainstream filmmaking used to be. Peter O’Toole‘s Henry and Richard Burton‘s Becket profess their regard for each other with bold openness and extravagant anguish. Precisely because this affection remains Becket’s subtext, it is never treated as a self-congratulatory end in itself. O’Toole and Burton are artistically free to fully vent their characters’ emotions.”
Director Peter Glenville “subtly encodes this historical epic with sexual intimations: Henry and Becket’s tandem escapades, phallic candles, bareback horseriding, etc. But he takes a dry approach to the complications of lost-love and how these legendary leaders deprived themselves — Becket through an excess of religious fervor, opposing the King’s edict out of personal arrogance; Henry through unchecked emotionalism and personal vengeance.
“This psychological depth gives Becket an edge over the other ’60s dramas about the Plantagenet rulers (A Man for All Seasons, The Lion in Winter, Anne of the Thousand Days) and puts it close to the sophistication of Lawrence of Arabia and, yes, My Own Private Idaho.”

“Going into the Sundance Film Festival, word was not good,” writes Hollywood Reporter critic Kirk Honeycutt. “Coming out of the festival, you realize how little value this ‘word’ actually possesses. All that acquisition frenzy wasn’t because of the high altitude. Sundance audiences’ thunderous ovations for every movie are getting to be a joke, but in many cases they were deserved.”
And yet Honeycutt seems content to half-breeze through his own festival experience, resigned for the most part to providing cursory descriptions of the films he saw that, with a couple of exceptions, affected him in some kind of thoughtful, jolting, semi-arousing way. But no grappling or wrestling, no laying down of the Honeycutt law.
“If anything epitomizes Sundance 2007, it is the acknowledgment not just in the documentaries but also in the lightest of feature films that the world is in a bad place right now. After seeing a couple of documentaries about atrocities in one day, a festivalgoer said to me that he felt like spending the next day in bed. Yet he was very glad he saw them.”

“We are in another of those historical moments, with grim death gargling at you around every corner and people being slaughtered like sheep. Of course, Academy voters could heed the incendiary Zeitgeist and vote for Babel, a film about international chaos, or Letters from Iwo Jima, depicting the last days of a losing war. The Queen shows a head of state stubbornly resisting the popular will, and The Departed is a chic bloodbath.
“Or, surveying this bleak terrain, the Academy membership might turn to the one feel-good movie nominated for Best Picture. Voting for a comedy that celebrates life — eccentric but essentially loving family life √É¬¢√¢‚Äö¬¨√¢‚Ç¨¬ù would be an affirmation of what Hollywood has done since its Golden Age: try to make America forget what makes it gloomy, and bring it a little Sunshine.” — Time‘s Richard Corliss reading the post-Saggie tea leaves.
HE postscript: I’ve been asking myself for the last five or six minutes why Corliss (or his editor) has capitalized “zeitgeist.” Just as I know that sometime down the road, editors are going to stop capitalizing the words “internet” and “web.” Two or three years Wired magazine declared that capitalizing these two was inane/ludicrous/nonsensical….but once the east-coast editorial establishment decides on a stylistic affectation, there’s no getting them off it.