Support on Patreon Follow @wellshwood
7 Comments
Tuesday Is The Day

I’m out of the Covid woods with a totally normal temperature, but I’m not completely clean and safe to be around (not 100%). The wiser, more sensible thing to do, obviously, is to blow off today’s Avatar 2 screening in Manhattan. (AMC 42nd Street, 1 pm.)

If Kirstie Alley was with us right now, she’d readily acknowledge that her acting career was in good to excellent shape in the ’80s and ’90s.

But once the 21st Century rolled around the emphasis seemed to be more on weight-loss programs, Fat Actress, and being a loyal Scientologist and a Trump supporter. (She voted for that animal in ’16 and ’20.)

Without these allegiances (Trump, Miscavige) she might have had a livelier career. People told her this repeatedly; either she didn’t listen or didn’t care.

I’m sorry that she didn’t have better luck with…well, a lot of things. And I’m sorry she didn’t live to be a happy 85 year-old.

I was planning to share some off-the-cuff remarks before Monday night’s Bedford Playhouse screening of Damien Chazelle‘s Babylon (Paramount, 12.23).

The special-event showing, courtesy of Paramount, kicks off Bedford Marquee, a new program that will occasionally showcase exciting new films two or three weeks before their release, and will include post-screening discussions when feasible.

Babylon began on time and all went well, but I couldn’t attend because of my Covid situation. I’m currently feeling fine with an 98.4 temperature, but it would have been cavalier to mingle. So early Monday afternoon I recorded some of the thoughts I would’ve shared live, transferred the eight minute and 45 second file to Vimeo and sent it to Bedford Playhouse bros Dan Friedman and Robert Harris.

I was told they might not be able to squeeze it in due to the fact that the film is on a specially encrypted DCP that can only be tested and played within a limited time frame. The DCP only arrived yesterday, due to bad weather and other delay factors and accompanied by bouts of anxiety and uncertainty — not unsual if you know anything about the workings of UPS and DHL.

Either way it was extremely cool of Paramount to allow us to present this herculean effort by director-writer Damien Chazelle, which I saw three or four weeks ago in Manhattan.

The next Bedford Marquee attraction will be a two-for-one deal — a mid-January screening of the recently restored Invaders From Mars (’53) along with a master-class from restoration master Scott MacQueen about the film’s exquisite visual transformation as well as a discussion of the film’s impact upon the sci-fi genre and how it reflected American culture and cold-war paranoia.

Inventively directed and impressionistically designed by the great William Cameron Menzies, Invaders From Mars is hands down the spookiest, most unsettling flying saucer film of the 1950s, due in no small measure to that eerie vocal-choir score by the unsung Mort Glickman.

Aside from the mildly distressing fact that I don’t look like I did 15 or 20 years ago, I’m okay with the video. Yes, I would prefer to wear amber-tinted shades a la Jack Nicholson but the red-frame, gray-tint ones are passable. 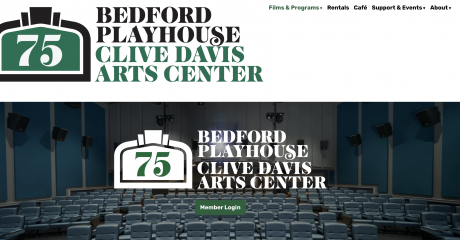 21 Comments
We All Understand The Game

If while profiling a non-binary person a writer fails to use the person’s correct pronouns, the writer could be (and most likely would be) attacked as some kind of bigot. I realize that Melena Ryzik had no choice but to follow the proscribed form in her N.Y. Times profile of Emma Corrin.

But I find these three paragraphs in Ryzik’s piece infuriating. I’m counting seven “they” pronouns contained in eight sentences. How many centuries were “he” and “she” the only pronouns in town among English-language speakers and writers? They apparently came into being sometime in the 12th century, and within the last…what, three or four years the pronoun game changed. A thousand years of the old wat, and and now and for the foreseeable future we’re all doomed to reading paragraphs like these three below: 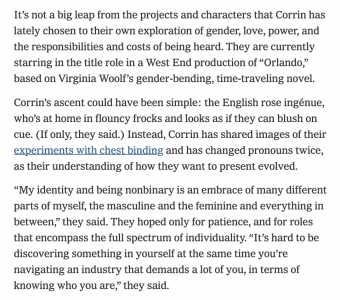 Ryzik doesn’t mention that Corrin came out as queer in April ’21, apparently because naming a person’s sexual preference is regarded as too invasive.

In July ’21 Corrin posted Instagram photos of herself wearing a homemade chest binder, which is a thing among certain younger queer women who want to avoid looking too womanly-curvy in the eyes of certain queer lovers or friendos, or something like that.

I find the idea of breast-binding (along with breast-flattening surgery for that matter) a little creepy. Partly because the basic notion of “binding” one’s natural biology…well, that was a heinous practice in pre-20th Century China, no? I also find it weird because my mother, self-conscious about her feet not being petite enough when she was in her early 20s, forced herself to wear too-small shoes when was working in NYC (BBC, NBC). Her feet were permanently disfigured the rest of her life. 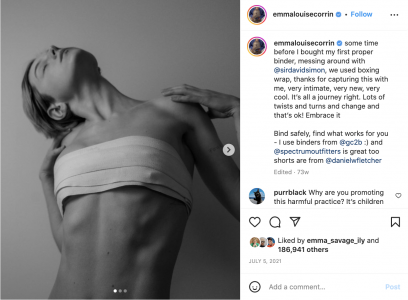 Mika Brzezinski says it straight and plain [7:25 mark]: “[Donald Trump] is a danger to our country. These are dangerous statements. He’s telling you what he wants to do. Believe him…okay? Like, how much does this country have to go through, how much division, how much hatred…how much pressure on our system…how much law enforcement…the FBI, Department of Justice, police officers…anyone in Donald Trump’s sights…how much stress on our democracy do we need to endure before we see that this man is a fascist, and that he has very, very bad intentions. And Republicans…are helping him by not stepping up and manning up and saying what is right qnd [defining] who you are.”

Posted on Facebook by Daniel Cremer three hours ago. Key hypothetical sentence, as suggested by venerated critic Michael Sragow: “A specific outcome was desired by [the woke Stalinists] so they weighed the poll results to their liking.”

The first tingly, muscle-ache sensations of Covid were felt Friday morning. I went through it a year ago so I know the deal. Yesterday I took a Covid test…bingo.

It took me four days to get through it last December so I’ll probably be out of the woods by Monday evening.

Right now I feel so depleted that the mere thought of sitting up and writing something is exhausting.

12:25 am, Monday: I can feel the Covid starting to weaken, dissipate. The worst seems to be over.

This morning’s recovery made think of Keith’s “98.6.” I shouldn’t need to remind, of course, that it’s no longer acceptable to address or refer to a girlfriend as “baby.”

Ladies and germs, the winner of the NYFCC’s Best Director award….

There’s no point in selecting a pretend version of the S & S ten greatest, but here goes anyway:

This is a very, very bad indication of where James Cameron‘s Avatar 2 may (I say “may”) be coming from. I literally gasped when I read the headline quote. I’m genuinely scared now. Testosterone in and of itself is not evil or toxic — it’s grade-A rocket fuel that gets certain characters up the hill and onto victory. Cameron is talking a woke game now but God help us if he really means this. Please God, don’t let Avatar 2 be woke…please. 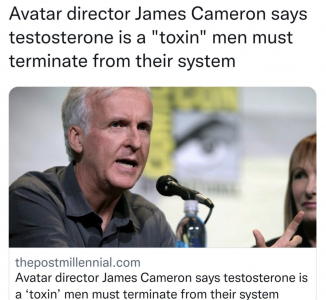 And I’d visit another five or ten times if I could. 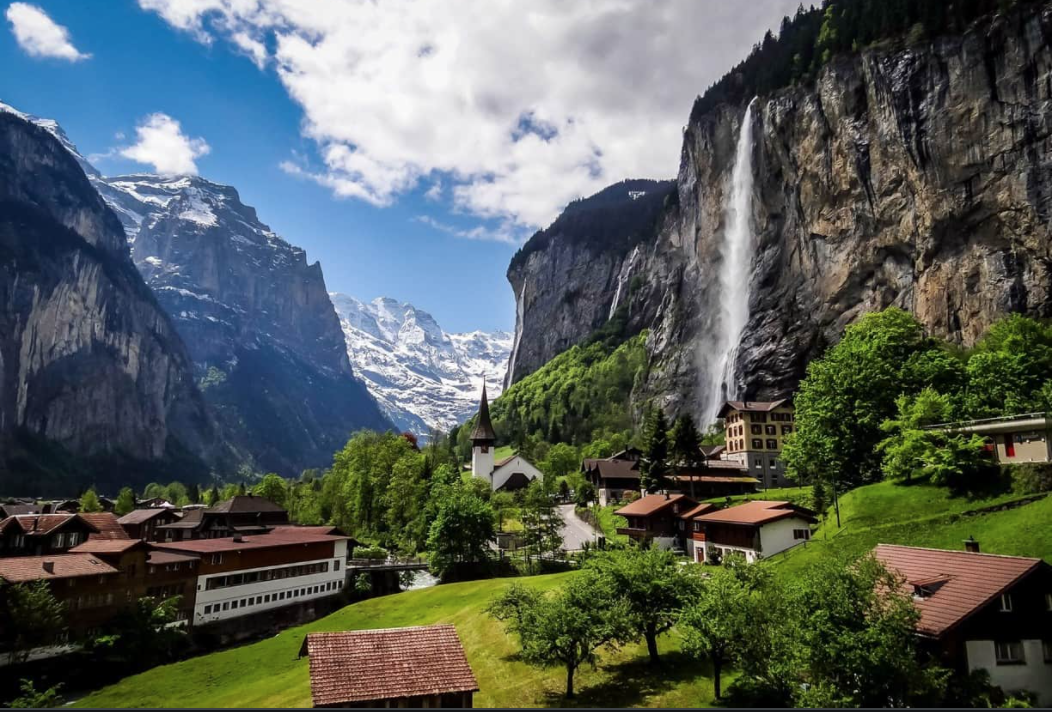 From Quentin Tarantino‘s “Cinema Speculation“: “Steve McQueen as Frank Bullitt keeps moving forward while Peter Yates, the director, follows him here and there as we, the audience, sit back and let them do our thinking for us. As pure cinema, Bullitt is one of the best directed movies ever made.” 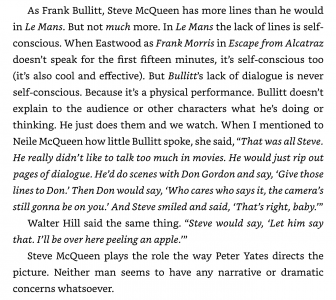 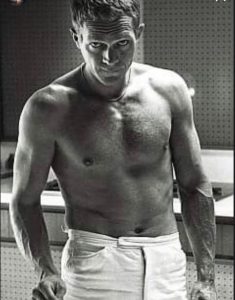 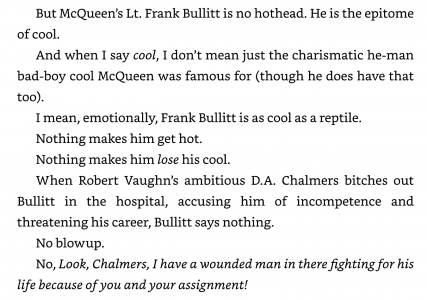 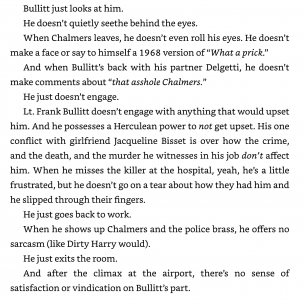