I’ll say it again for the fourth time — 2016 is looking like a relatively weak year in terms of potential review-driven, award-calibre features, particularly those destined to open over the last three months (10.1 to 12.31). I’ve previously posted a raggedy rundown of the films that appear to have the horses to compete, but now that this list is set to post tomorrow morning in the new 2016 Oscar Balloon I’d like another appraisal about what’s missing, what needs to be discounted, etc.

An HBO Now promotion is offer “full, unedited episodes of HBO’s shows for free,” but with Vinyl bannered as the principal lure — the main show that non-subscribers might want to sample. (Please?) A 2.17 Vulture piece by Joe Adalian reported that ratings for Vinyl’s two-hour opening episode “were shockingly low — 764,000 viewers or one of the smallest audiences ever for the first installment of an HBO drama in recent years. Vinyl even finished below the audience of the show that followed it, Last Week Tonight With John Oliver (1 million).” 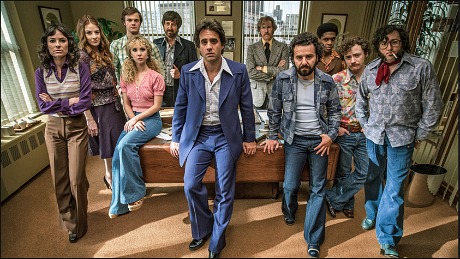 67 Comments
Spirits Shower Spotlight With Five Trophies. Plus Two For Beasts of No Nation, A Biggie For Son of Saul, The Usual Larson Win, etc.

You’d never know from attending today’s near-euphoric Spirit Awards ceremony that Tom McCarthy‘s Spotlight, which won five major awards (Best Feature, Director, Screenplay, Editing and Ensemble Acting), isn’t quite favored to win the Best Picture Oscar tomorrow night. I was basking in Spotlight fever and having a great time along with everyone else, but I’m still sensing that The Revenant has it in the bag. I think. “The Revenant can’t win,” a colleague insisted as we sat in the press room around 3:30 pm. “It’s too divisive.” My answer: “I’m not going to slit my wrists if Spotlight doesn’t win or if The Revenant doesn’t win. I can not only live with but applaud either scenario. I’m just feeling the pollen and the pixie-dust vibes and the current in the air…that’s all. And it mostly feels like The Revenant.” 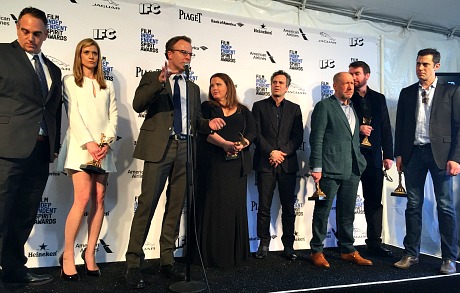 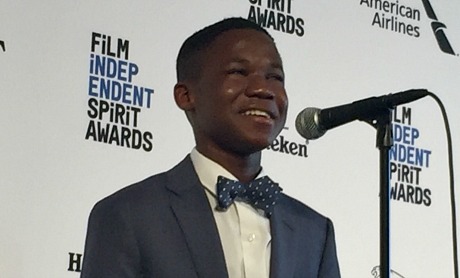 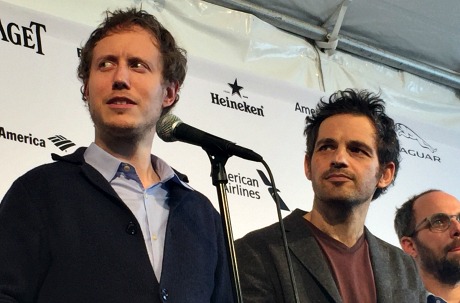 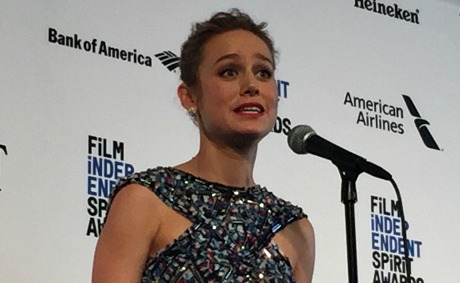 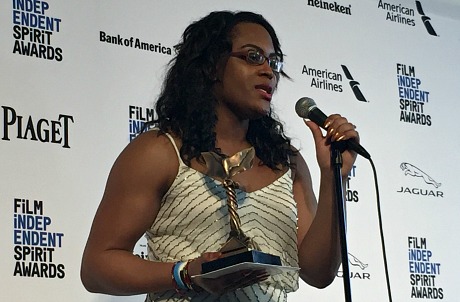 I missed (i.e., couldn’t have cared less about) The Man Who Knew Infinity (IFC Films, April) when it played during last September’s Toronto Film Festival. That’s because my insect antennae told me in advance what the Variety review confirmed — “plodding.” “overly dutiful.” I can’t stand it when a trailer pushes old familiar buttons that marketers are figuring will make me feel comfortable or interested but in fact push me away.

And yet the major-category winners always seem to push back or comment upon the Oscar tip sheet. Plus the Spirit guys always seem to favor the big-marquee, name-value nominees who are also up for Oscars, or who have been snubbed by same. Bottom line: the Spirits are always looking to reach out to, include or at least not alienate those who are watching on the IFC Channel. And that means blanding it down or…you know, avoiding anything too curious or strange.

Example: Spotlight is favored to take the Best Feature award not just because the cast has already been chosen as the recipient of a Robert Altman Best Ensemble award (aping an identical award handed out by the Gothams) but also because of a general feeling that the Spirits need to counter-balance a notion that the Best Picture Oscar is The Revenant‘s to lose.

Another way to push back against the Oscars would be to give the Best Feature award to Cary Fukunaga‘s Beasts of No Nation, which the Academy membership brushed aside over the Netflix thing or, as Lawrence O’Donnell said the other day, probably due to racial bias, or to hand Fukunaga the Best Director award. Or give the Best Male Lead to award to Abraham Attah. But the Feature/Director scenarios aren’t as likely with the Spotlight competition. Marquee value.

“Let’s be clear: Trump is no fluke. Nor is he hijacking the Republican Party or the conservative movement, if there is such a thing. He is, rather, the party’s creation, its Frankenstein monster, brought to life by the party, fed by the party and now made strong enough to destroy its maker.

“Was it not the party’s wild obstructionism — the repeated threats to shut down the government over policy and legislative disagreements; the persistent call for nullification of Supreme Court decisions; the insistence that compromise was betrayal; the internal coups against party leaders who refused to join the general demolition — that taught Republican voters that government, institutions, political traditions, party leadership and even parties themselves were things to be overthrown, evaded, ignored, insulted, laughed at?

“Was it not Sen. Ted Cruz (R-Tex.), among many others, who set this tone and thereby cleared the way for someone even more irreverent, so that now, in a most unenjoyable irony, Cruz, along with the rest of the party, must fall to the purer version of himself, a less ideologically encumbered anarcho-revolutionary? This would not be the first revolution that devoured itself.

“We are supposed to believe that Trump’s legion of ‘angry’ people are angry about wage stagnation. No, they are angry about all the things Republicans have told them to be angry about these past 7 1/2 years, and it has been Trump’s good fortune to be the guy to sweep them up and become their standard-bearer. He is the Napoleon who has harvested the fruit of the Revolution.” — from a 2.25 Washington Post op-ed piece by Robert Kagan, a senior fellow at the Brookings Institution and a contributing columnist for the Post.

There’s a visual clue at the bottom of the latest Criterion newsletter about an upcoming Bluray…duhhh. The question is “why?” The Sony Bluray that popped in 2009 is totally fine. Yes, I’ve always wanted to see a 1.33 or 1.37 version with occasional 1.66 in-camera croppings rather than a 1.66 all-in, but…well, maybe this is a Criterion notion. An HE reader recalled this morning that he “had the Criterion Laserdisc of Dr. Strangelove” way back when and recalls “an explanation in the notes about how the aspect ratio of the B-52 sequences being 1.33:1 (?) was intentional. I’d assume they would carry that over to the Bluray.” 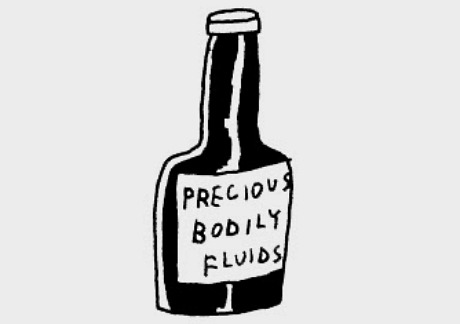 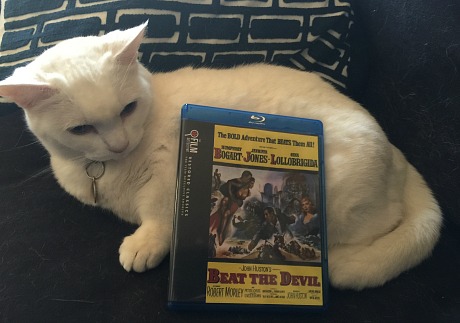 Did I attend Wednesday’s all-media screening of Gods of Egypt? You might just as well ask, “So, did you jump into that cesspool you discovered last year when you were hiking in the outlying suburbs of Tijuana?” Imagine the nihilism and corruption that created this thing…imagine the self-loathing that director Alex Proyas must have felt this morning when he looked in his bathroom mirror. It was obvious from last November’s trailer that it was delivering a kind of super-CG poison. I’m sorry but submitting to a film like this just didn’t seem worth it, and I mean not even close.

Who in the world would pay to see this thing? Then I remembered a young Hispanic couple standing in the Arclight lobby in late November of 2011. Here’s my description: “Early this evening a young Latino couple was looking at the digital lobby board inside Hollywood’s Arclight plex. The guy walked forward, got into line and turned to the girl. ‘You wanna comedy? Or…what, action? A comedy?’ The girl half-shrugged, seemed more than a bit bored. ‘I dunno…whatever,’ she said. He shrugged also, turned back to the board.” Right?