The whole town’s gone apeshit over Aaron Sorkin’s The Trial of the Chicago 7, which was press-screened on Netflix earlier this evening. No “reviews” until 9.24, but why not jump into the pool for a quick dip, so to speak?

How many idiots out there will accuse this new Black Narcissus miniseries of whitewashing after catching the first episode? Based on the same 1939 Rumer Godden novel that the 1947 Michael Powell-Emeric Pressburger film was modelled upon, directed by Charlotte Bruus Christensen, exec produced and written by Amanda Coe, and starring Gemma Arterton, Alessandro Nivola, Aisling Franciosi, Diana Rigg and Jim Broadbent.

The first and best known wrong-way freeway car chase happened in William Friedkin‘s To Live and Die in L.A. (’85). Another wrong-way-on-the-freeway happened in John Hughes‘ Planes, Trains & Automobiles (’88), but that was for comic effect. In his 9.3 Tenet review The New Yorker‘s Anthony Lane wrote that while Chris Nolan stages another such chase with panache, “heading the wrong way up a busy road is pretty much a daily commute” for Matt Damon‘s Jason Bourne. Except I’ve done some searching and while there’s no shortage of magnificent car-chase sequences in the five Bourne flicks, there’s no actual wrong-way-on-a-freeway. So thriller-wise there’ve really only been two — Live and Die plus Tenet. Right?

The Trump psychopath factor has led to a battleground-state tightening, although there’s little question that Biden is strongly favored as we speak. Especially with the new Democrat fervor in the wake of Justice Ginsburg‘s passing. Only pessimists and the proverbially panic-stricken are concerned. 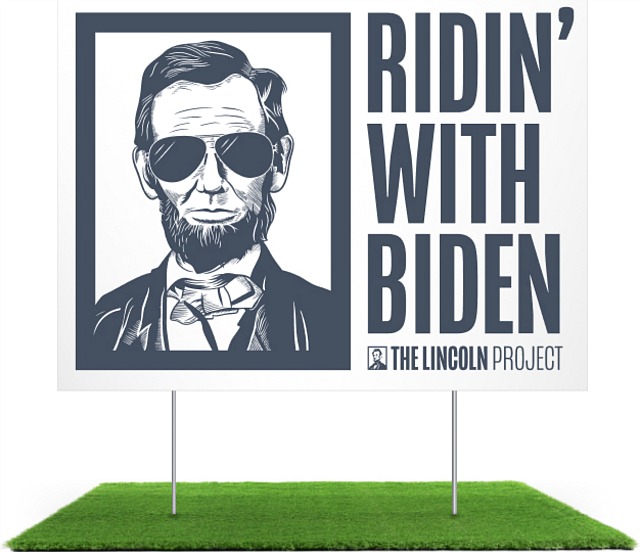 Last week select junket journos were given a peek at Aaron Sorkin‘s The Trial of the Chicago 7 (Netflix, 10.16). It’s also being press-streamed today. But of particular interest are the limited theatrical bookings starting on Thursday, 9.24 and continuing until Wednesday, 9.30. Chicago, Boston, Stamford, Greewniwhc, Hoboken, etc. HE regulars willing to brave an indoor theatre are requested to catch Chicago 7 and offer comments. 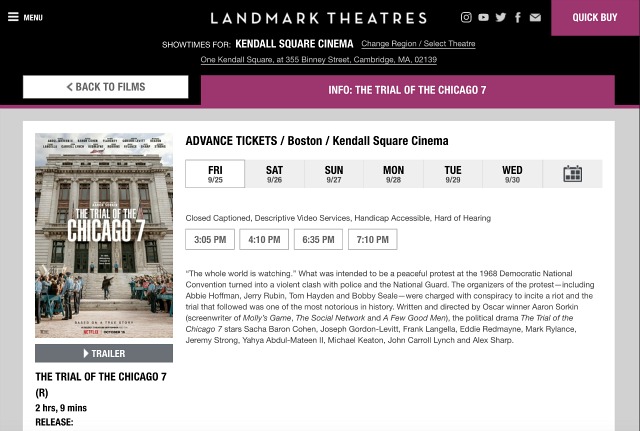 9 Comments
HE to “Beatles in India” Helmer Paul Saltzman 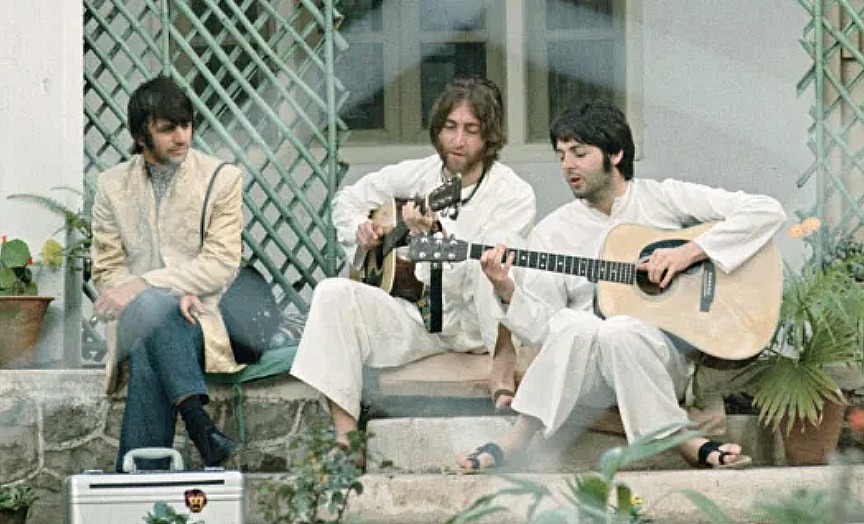 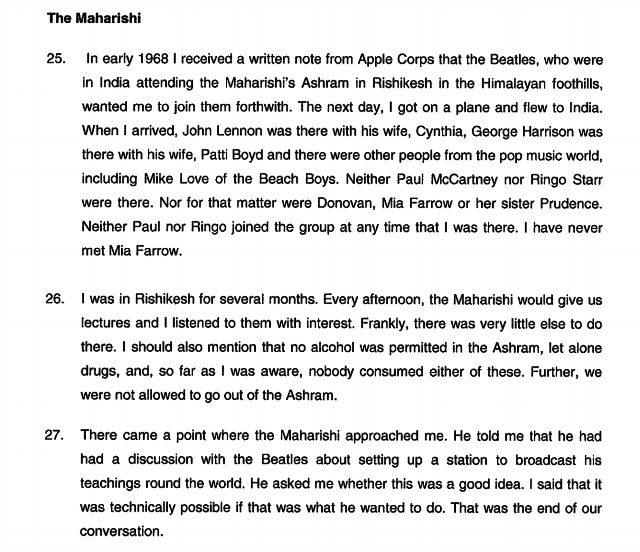 Republican Utah Senator Mitt Romney has dashed liberal hopes by announcing a willingness to vote for Trump’s Supreme Court nominee before the 11.3 election, which seems to all but assure confirmation.

The only way to stop the Supreme Court confirmation process, at least until after the election and perhaps into January or beyond the 1.20.21 inauguration, is for the Democrat-controlled House of Representatives to initiate impeachment proceedings against Attorney General William Barr, which would have been warranted anyway. Seriously — what other blocking option is there? Re-impeach Trump? 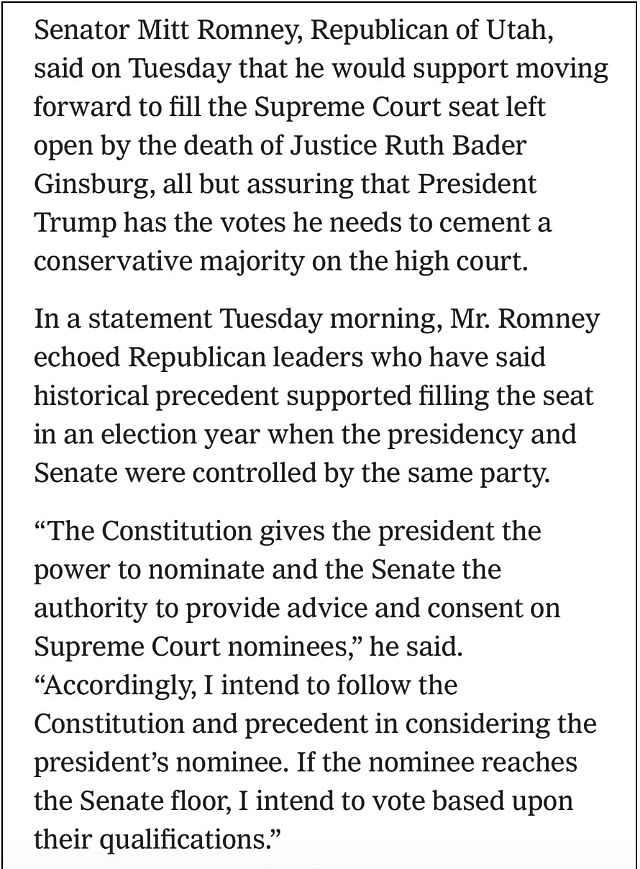 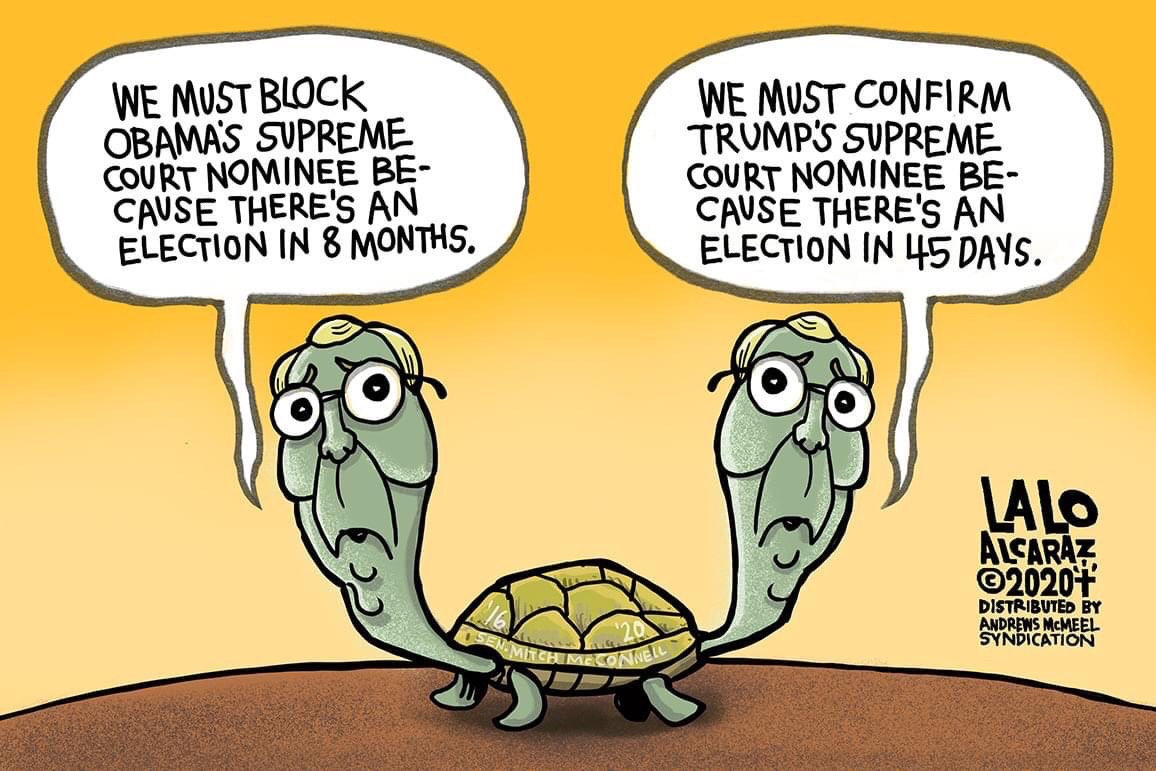