In his handling of Music and Lyrics, director- writer Marc Lawrence “makes everything about three times more obvious than it needs to be,” says Variety critic Todd McCarthy. And yet “there’s energy” in this Hugh Grant-Drew Barrymore romance that Warner Bros. will open on 2.14, “and the actors feed on it. 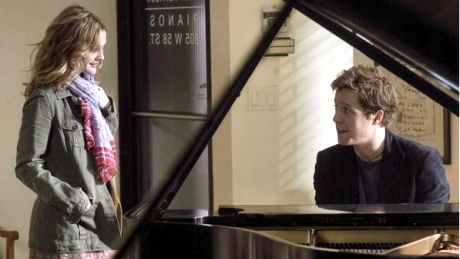 “Grant carries the day as the fortysomething lad still living off his youth and just about getting away with it; from his first moment onscreen, he persuades you he’s the only possible actor for this tailor-made role. No matter Grant’s effervescence, newcomer Haley Bennett nearly steals every scene she’s in as the Britney/Christina/Madonna figure. Very cute and a hot little dancer, the singer-thesp presents an implacable figure of absolute privilege and authority while sneakily sending up the whole celebrity package in a wonderfully sly turn.

“Which leaves Barrymore something of the odd woman out. Granted her Sophie starts out just wanting to blend into the wallpaper, but the star still comes off as rather more drab than necessary, or at least seems so in light of the charisma popping from the pores of those around her. Surrounded by an ex-star, a diva, a brilliant former boyfriend and a livin’-large sister, it’s hard for a normal neurotic to get a word in edgewise.”

A sophisticated film chum who’s currently trolling the Berlin Film Festival (and who weirdly asked for anonymity) insists that “Olivier Dahan‘s La Mome (a.k.a., La Vie en Rose) — a hurricane dramatic ride into the tumultuous life of Edith Piaf — is the first great film of 2007.” 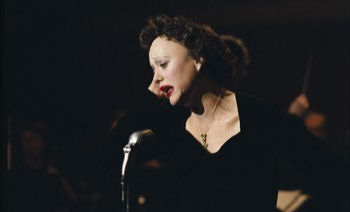 strong>Bob Berney’s Picturehouse acquired U.S . distrib rights in Cannes last year, and is now pushing what Berlin guy feels will be the #1 contender for the Best Foreign Language Feature race of this year.”

Marion Cotillard “delivers one of the best female performance of the past decade,” he insists. “She’s the Penelope Cruz (in Volver) of this calendar year except she could have a serious shot at winning it all.’

No Variety review yet, but the Hollywood Reporter‘s Kirk Honeycutt is calling it “a messy triumph…showy and scattered, sometimes corny and other times outrageous, focused intensely on emotions, in love with its heroine and to hell with anything else. 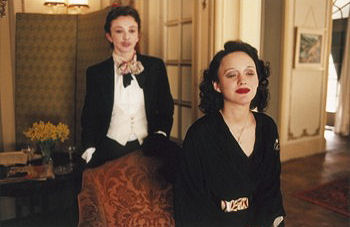 “Dahan, who co-wrote the script with Isabelle Sobelman, pulls apart Piaf’s improbable, melodramatic life and puts it back together in a mosaic that suits his idea of the singer. Dahan sees Piaf’s life as a fantasia where nothing separates life from art, where miracles dwell alongside tragedy and grief and a saint can drop by for a visit.

“The film is messy the way Piaf’s life was messy: It’s unafraid of extravagant gestures even when they fail to come off.

“La Vie en Rose aims at a broad international audience with a mix of Piaf standards, doomed romance and a larger-than-life, self-destructive heroine.

“Thanks to an extraordinarily brave performance by Marion Cotillard, whose every gesture and singing performance channels not only Piaf but perhaps a bit of Judy Garland, the film should have wide adult appeal,” Honeycutt declares. “Critics will be divided about the filmmaking, especially its more self-conscious aspects, but Cotillard’s performance and the film’s fervent, romantic belief that misery can be turned into art will connect with many age groups, especially among women.” 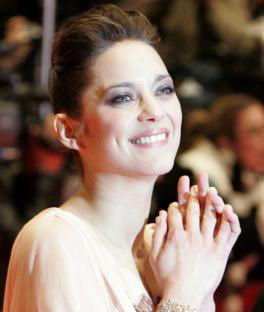 Is EXBERLINER Berlinale blogger D. Strass behind the curve and/or missing the boat on La Mome/Vie en Rose? He could certainly file a bit faster, since La Mome is the first seemingly hot thing to emerge from the Berlin Film Festival, with Marion Cotillard allegedly giving the first ’07 performance with a shot at becoming a Best Actress contender.

“Film choices are minimal today,” he wrote yesterday. The press screenings kicked off with a French prestige production (which is to say, it was almost three hours long): Olivier Dahan‘s La Mome, a biopic about Edith Piaf. [I’ve been] assured that this film will be worthwhile, though films of this size and nature tend to be more worthy than worthwhile if you see what I√É¬¢√¢‚Äö¬¨√¢‚Äû¬¢m saying.

“The French still create the sort of gigantic historical epics that passed from favor in the U.S. 40 years ago, and with a sprinkling of politically muddled exceptions. And very few of these French Fanfares have much to offer other than some finely lit soot and, again, with a few exceptions. I notch this up to a pervasive nostalgia and melancholia that continues to flow through French culture √É¬¢√¢‚Äö¬¨√¢‚Ç¨≈ì the same sort that enable their love of Edith Piaf.”