Support on Patreon Follow @wellshwood
24 Comments
Sizemore to the slammer

Poor, addicted, self-destructive Tom Sizemore — a walking car wreck in a town filed with drug-meltdown cases — has been doing his level-best for years to erase his career and poison himself in the bargain. The simplest and cleanest procedure would be to kill himself, but it appears that Sizemore is into half measures. TMZ reported this morning he was sentenced to 16 months in the slammer (Donovan Correctional Facilty, near San Diego) for violating his probation in a 2004 methamphetamine conviction.

Two zippy quotes from Allison Hope Weiner‘s 6.25 N.Y. Times piece about Harvey Levin’s TMZ. One is Levin himself saying that despite initial reservations about launching a celebrity website, “I started seeing that if you don’t have time periods and publishing cycles, you can publish on demand and beat everybody.” The other is a non-identified publicist equating Levin’s power with that of columnist Walter Winchell in his 1940s heyday. “If you have something you know [TMZ] will like, you tip them to it,” he says. “It’s kind of the old way you dealt with the old-time gossip columnists…you have to occasionally feed them an item…you have to be in the game with them…if you’re a publicist and the only time you call up is to complain about an item, they’ll laugh at you.”

The single worst TV ad for a line of pseudo-hip ’80s jackets by a celebrity pitchman ever made or aired. In fact, it ranks as one of the worst ads ever, for anything, in any medium. (I’m posting this because of Phil Leotardo‘s goombah nephew…figure it out.) Thanks to Mutiny Co.’s Jamie Stuart for passing this along.

This is hard to explain, but here goes: as much as I love the fact that slightly grubby sub-run theatres like Lyndon Golin‘s Regency Fairfax and the Silent Movie theatre a block or two south are doing pretty well, I never really feel like actually driving over and plunking down five or six bucks for a cheap seat at either establishment.
That sounds shitty and unhelpful, but most of us are fairly passionate about seeing movies only at deluxe, blue-chip locations or at home on DVD, and no in-betweens. Call them high-thread-count venues….I don’t care…but I just don’t want to schlub it when I’m out seeing a film. Same deal with the New Beverly Cinema…wait, they’ve put in new seating and have cleaned up the sticky floors?
And yet I love the fact that others in the Fairfax disrict (i.e., the nearby retirement-age community, under-30s with not much money, etc.) love the Fairfax and the Silent Movie theatre. The Fairfax district would be immeasurably harmed if either one of these theatres were to shutter. I mean that. Is this coming out right?

“I couldn’t let it just hang. Eight years of my life, and a fucking artsy cut to black? It was eating me up inside. I just had to tie up the loose ends. I’m positive this is exactly how [creator and executive producer] David Chase wanted fans to interpret the ending.” — Sopranos fan Louis Bowen explaining to an Onion staffer why he felt compelled to murder James Gandolfini last Tuesday at an Italian Greenwich Village restauant called Occhiuto’s. 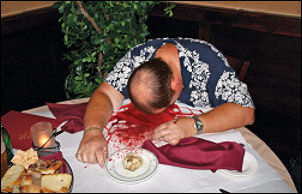 “Whatever else they may be, movies are stories people tell us; and a review is a conversation the critic has with both the filmmaker and the audience about the power and plausibility of the tale. No one has done as much as Roger Ebert to connect the creators of movies with their consumers. He has immense power, and he’s used it for good, as an apostle of cinema. Reading his work, or listening to him parse the shots of some notable film, the movie lover is also engaged with an alert mind constantly discovering things — discovering them to share them.” –from a Time tribute piece by Richard Corliss.

Shortly before Strangers on a Train was released, Farley Granger (i.e., Guy Haines) ran into Robert Walker (i.e., Bruno Antony) at a party in Hollywood. “He said, ‘Farley, we have to get together…I miss you…We should not let the friendship slip away,'” Granger tells L.A. Times staffer Susan Granger. “I took his number and he took mine, and the next thing I knew he died.”
On Wednesday, 6.27, Granger will be signing copies of his co-written autobiography, “Include Me Out: My Life From Goldwyn to Broadway” at the Santa Monica branch of Every Picture Tells a Story (at 1311 Montana) , and will then do a q & a after a screening of Strangers on a Train at the Aero. 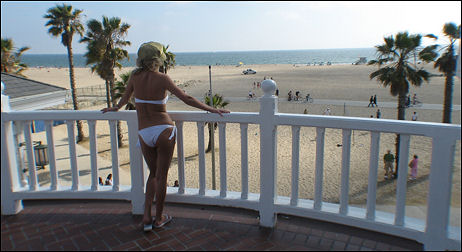 From the third-floor deck of Shutters in Santa Monica — Sunday, 6.24.07, 4:50 pm – where I went to chat with director-writer Jim Toback, who’s working in Culver City on a documentary about Mike Tyson.
June 24, 2007 7:01 pmby Jeffrey Wells
9 Comments
Goldstein on Herzog

At 64, Werner Herzog is our filmmaking god of dark adventure, a willful but adventuresome artist whose characters — both in his features and documentaries — test the boundaries of human madness and quixotic folly.” — from Patrick Goldstein‘s 6.24.07 L.A. Times profile, titled “Werner Herzog’s Night Vision.”

Arnold Jones, brother of the late Anderson Jones, informs that a memorial is being planned for Saturday, 6.30.07 at 1 pm at a small church all the way the fuck down in Long Beach (location yet to be disclosed). Flowers and condolences can be sent to Andy’s parents, Anna and Arnold L. Jones, at 1471 E. Fairifield Ct. Ontario, CA 91761. 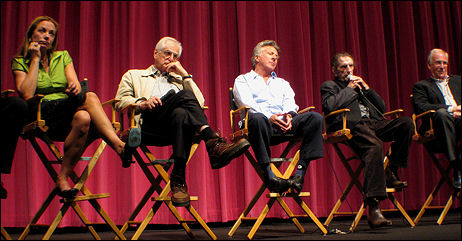 L.A. Weekly critic Scott Foundas asked the questions, but he didn’t have to work very hard at keeping the ball in the air. Hoffman and Grosbard, in particular, just let it roll and roll and roll. Here’s an mp3 of a portion of what was said (i.e., a recording of a videotape that I took that was way too big to upload — 1.6 gigs). You’ll hear Grosbard first, and then Stanton and Russell (or the other way around) and then Hoffman comes in with a longish riff about his research, including an interesting observation about how criminals and actors aren’t all that dissimilar.

As expected, Evan Almighty was flat on Saturday. Sequels don’t usually increase business from Friday to Saturday, and this one’s coping with mixed word-of-mouth so the adjusted projection is now $32,112,000. 1408 was down also (horror peaks on Friday night with the young), but the projection went up — it’s now expected to hit just over $20 million. The John Cusack-er may even overtake Fantastic Four: Rise of the Silver Surfer for the #2 slot…maybe.