The finest Hillary-trashing pot high of the day has already been provided, again, by the glorious Wall Street Journal columnist Peggy Noonan. It’s not just a hunger for a daily Hillary hate-on that articles like Noonan’s greatly satisfy, but an almost Biblical-level feeling of clarity, cleansing, righteousness. There’s no way to not feel good about this.
All last night I thought about the Clinton campaign’s communications director Howard Wolfson stating yesterday that, if necessary, Hillary is ready to burn the house down all spring and summer long in order to fulfill her clawing ambition. That first, the fair or decent thing second. But more and more people, thank God, seem to be understanding who she is.
“‘This is death by a thousand cuts,'” Noonan begins. “That’s what they keep saying about Hillary Clinton.
“Her whole life right now is a reverse Sally Field. She’s looking out at an audience of colleagues and saying, ‘You don’t like me, you really don’t like me!’
“Although of course she’s not saying it. Her response to what from the outside looks like catastrophe? A glassy-eyed insistence that all is well. ‘I’m tested, I’m ready, let’s make it happen!’ she yelled into a mic on a stage in Texas on the night of her latest defeat. This is meant to look like confidence. Whether or not you wish her well probably determines whether you see it as game face, stubbornness or evidence of mild derangement.
“In Virginia last Sunday, two days before the Little Tuesday voting, she suggested her problem is that she’s not a big phony. ‘People say to me all the time, ‘You’re so specific…why don’t you just come and, you know, really just give us one of those great rhetorical flourishes and then, you know, get everybody all whooped up?’
“I thought it an acknowledgement that loss might come,” Noonan writes. “But by Thursday afternoon, Mrs. Clinton was furiously stumping through Ohio using the same line of attack, but this time it wasn’t a marker. The race is about ‘speeches versus solutions.’ Her unnamed opponent stands for the first, she for the second. He is all ‘words,’ she is ‘action.’ ‘Words are cheap,’ she said.
“If they were so cheap, her inability to marshal them would not have cost her so dearly.”
Or as MSNBC’s Chris Matthews said yesterday, there’s never been a U.S. President commonly regarded as great who hasn’t been a great orator. What U.S. President who wasn’t a great orator and a profound uplifter of spirits is considered great by historians and the general public?
Noonan also underlines a relationship between Clinton’s way of doing things and that a certain departed U.S. president. She quotes “an old Richard Nixon hand” observing that “Nixon [didn’t] always think honesty is the best policy, but he [did] think it’s a policy.” Like Clinton, she implies, Nixon “saw it as a strategic gambit, to be used like any other.”

The trailer that went up yesterday for M. Night Shyamalan‘s The Happening (20th Century Fox, 6.13), which looks and feels like a return to the eerie-scary-inexplicable jolt vibe of Signs. Perhaps this time we’ll be spared the religious hokum. (Thanks to HE reader Suki Jonze for the shout-out.)

At 4:31 this morning, AICN’s Drew McWeeny reported some digital tweakings in the U.S. version of the Indiana Jones and the Kingdom of the Crystal Skull teaser that are not evident on the international version. He was alerted to this stunning realization by a message board rant that appeared last night on CHUD. 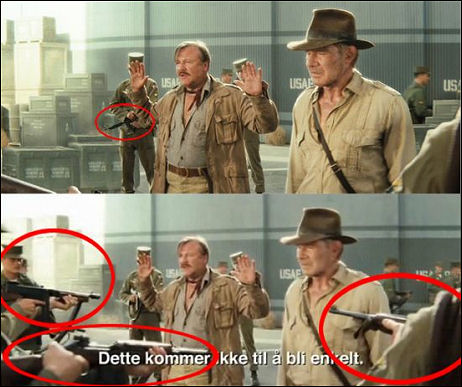 A frame-filling American flag CU appears in the domestic version but is absent overseas. Fewer Russian guns are aimed at Harrison Ford and Ray Winstone in the U.S. version. And something about Winstone’s khaki pants is said to be strikingly different in the int’l vs. domestic versions. (Extra wrinkles? A urine spot? An absence of a belt?) Were the guns CG’ed out because of some MPAA edict? Is the American flag supposed to provide some kind of subminal emotional comfort to Bush-McCain nation?
I have to be honest and admit that on a scale of 1 to 10, my interest in this matter is currently between 4 and a 4.5.